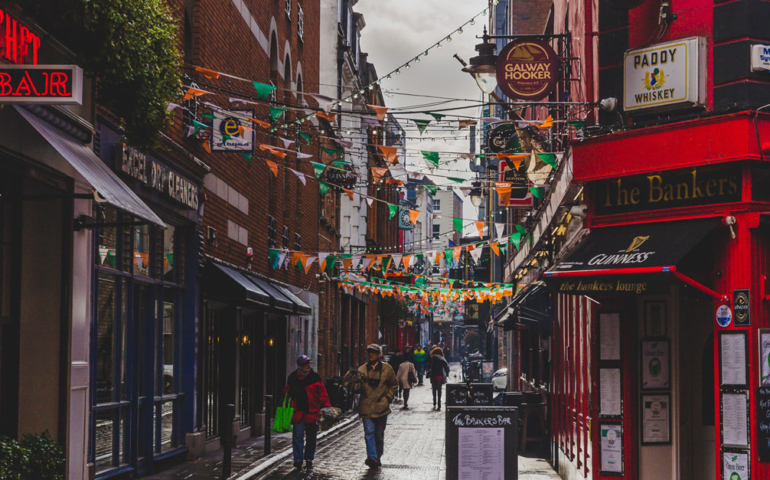 “The first time I went into Donegan’s, I felt as though this was a pub that really belonged there, like it had been in its current form for years,” Alex Conyngham, co-founder of Slane Irish Whiskey, says of a quaintly furnished bar in Collen, Ireland. Slane operates out of Conyngham’s family castle in neighboring County Meath, and Donegan’s is a popular option in the area.

“It’s the quality of service, the convivial atmosphere,” Conyngham says, noting how the interior “feels like an authentic, heritage Irish pub you would typically find in rural Ireland.”

The only thing is, Donegan’s rather recently debuted this look, Conyngham says. It’s one of thousands of bars worldwide that work with designers and consultants to create the illusion of a centuries-old Irish pub, complete with tarnished tin signs, worn wooden stools, and yellowing photos of rolling fields. Specialized firms like The Irish Pub Company (IPC) and ÓL Irish Pubs Ltd., both based in Dublin and backed by Guinness, along with smaller, more locally focused outfits like Love Irish Pubs, have helped install prefab pubs everywhere from small-town Ireland to Lagos, Nigeria.

Drinking in these retrofitted spaces is oddly comforting, akin to visiting Colonial Williamsburg or MGM Studios in Orlando. Fake-real pubs have unusual, undeniable appeal: They are grounded in something tangible and knowable, yet they exist apart from reality, and free from chaos and uncertainty.

Can these artificial Irish pubs be everything we want them to be? (Yes, of course they can. That’s the point.)

In 1973, a Dublin architecture student named Mel McNally took a deep dive into Irish pub aesthetics for a school project. He titled it, “Best Designs within Dublin Pubs.”

McNally soon realized he was onto something, and what began as academic study became his career. By the 1980s, McNally and a team of designers were masterminding pub interiors throughout the U.K. and Ireland.

In 1990, McNally’s Irish Pub Company teamed up with Guinness and, together, they embarked on a journey that would span 1,600-plus projects in more than 57 countries, from Atlanta to Moscow and back again. While IPC is not the only player in the prefab pub game, it’s the industry’s undisputed pioneer.

“The story, as he tells it, his professor thought it was a bit of a joke,” Darren Fagan, contracts manager and business developer for The Irish Pub Company, and the main overseer of the organization’s North American operations, says. “However, as Mel started to go through his project, the professor realized it was a very serious thing, a solid project. He was able to look at all of the things that made an Irish pub unique versus any other kind of pub and recreate that to the best of his ability.

“During the early ’90s when I started with them, it was just gangbusters across Europe. Every week it was a different pub — it was just a phenomenal experience.”

“It’s a very romantic idea to open up not only your own pub, but an Irish pub,” Fagan says. “But for them to be successful, we have to kind of hand-hold, talk with our clients and see if it’s really the right idea for them. We’ll give them a couple of cues and really force them to think about their business plan. And if they don’t have the answers, well then, we don’t continue the conversation because we’d never get anywhere. You don’t want to own this for the rest of your life and always be paying it off.”

The key element to evoking fake-real magic, as any enthusiast knows, is the narrative. You can stockpile all the antique harps and mounted copper whiskey thieves you want, but without a cohesive origin story, it’s just bric-a-brac with a side of beer.

Each composition is tweaked to reflect the client’s vision. In the early days, IPC might enhance the tale with one-of-a-kind furnishings salvaged from shuttered pubs around Ireland. Nowadays, according to Fagan, much of that trade has dried up. Demand outgrew natural supply, and so a thriving reproduction industry has since risen in its wake. IPC now sources the bulk of its material from manufacturers, each of which peddles individual specialties.

“A lot of the artifacts, for many years, were original antiques,” he says. “But now, I’d say 99 percent of the pubs are all new productions. A lot of the suppliers have generated business around the Irish pub, whether it’s specialty glass, light fixtures, floor finishes, and so on, and they’re very efficient, very effective. What appears custom on paper is actually a combination of a lot of things that these guys already have on hand.”

As luck would have it, my newly adopted city, Chicago, happens to be home to a groundbreaking member of IPC’s 100-strong U.S. portfolio. I went to check it out immediately.

Fadó has stood on the corner of Clark and Grand in the buzzy River North district since 1997. It’s the third installment in what later became a multi-state chain overseen by an Irish-born accountant-turned-publican, Kieran McGill.

The tri-level pub is a testament to IPC’s own growth and evolution. The upstairs, original to 1997, features a stunning, 150-year-old bar brought over part and parcel from The Potkey Kitchen in Dublin. It joins a stone fireplace, rustic bar stools, and a cozy snug, tucked away beneath heavy curtains. The mezzanine and the first level, by contrast, were renovated with help from IPC in 2014 and sport a more contemporary feel, with sleek high tops, dark wood, leather banquets, and a grand, central horseshoe bar lined with sparkling silver taps.

“When we opened up here in 1997, we were trying to bring what Irish pubs were looking like to America at that point,” Fadó regional manager Kieran Aherne, a Limerick native, tells me on a mind-numbingly cold Tuesday afternoon. “There were tons of Irish bars around, but they were really American bars with a shamrock in the window, to be honest. There wasn’t a ton of pubs, and a lot of it was to do with the expense.”

“This was a $3 million build-out and that was unheard of. But that was part of the commitment, so that you walk in and you’re going, ‘Oh my gosh, this is just like being in Ireland,’” Aherne says.

Twenty years later, however, Chicagoans and Dubliners alike wanted something else from their bars. And so Fadó renovated portions of its space.

“They’re a bit more contemporary — you have clean lines, good furniture,” Aherne says. “We wanted to be able to go, ‘This is Ireland of yesteryear, which we love, and down here’s what it looks a bit more like today.’ And we did. 2015 ended up being the best year we’ve ever had, and it’s been really good every since.”

I’ve only lived in Chicago for three months, but I can confidently say that this city takes its drinking very seriously. There are gritty old dives that reek of history, where, if you crack a door at 10:30 a.m., you’ll reveal a string of lifers downing cans of Hamm’s or Old Style while staring at Bears highlights. Music spills out of beautiful jazz bars once frequented by Prohibition-era gangsters. There are dozens of taprooms where you can share pints with brewers, and fancy cocktail bars touting obscure rums, mezcals, and whiskeys.

Amid this sea of boozy authenticity, Fadó, in all its fake-real glory, is making a killing. It’s not just because it’s one of the few spots in the Chicagoland area with a Six Nations rugby cable package, though that helps.

“We wear a lot of hats — we do a pub quiz on Wednesday nights, we do lunch, happy hour, parties, and we’re the No. 1 European sports pub in the city,” Aherne says. “People are looking for an experience. That’s something we’re constantly looking for, training our staff with respect to service, engaging and trying to connect with people. If you come in and sit at the bar here, somebody’s going to extend a hand and introduce themselves. That’s important for us.”

Fadó’s continued success in a hard-drinking city like Chicago speaks to IPC’s masterful aesthetics, the kinds of business owners it attracts, and the social environments it creates. The decorative bronze oil lamp displayed in Fadó’s upstairs snug may have been fabricated in a 21st-century warehouse in Dublin, or it may have been picked up at a little old lass’s estate sale. Who can say? What matters more is the tone it sets, the warm, familiar glow it casts on the bartenders’ faces as they pull another velvety pint.

IPC’s pubs produce a sense of comfort and stability, whether you’re sipping your whiskey at a faux brewpub in Antibes, France, a Moscow storefront apothecary, an indoor casino in Las Vegas, or before catching a flight out of JFK. You know exactly what you’re getting, and it greets you in a lilting brogue.

“When you walk into a pub, there’s certain expectations. It’s not very pretentious, you can go in and be yourself, and that’s the idea. You don’t have on be on alert,” Fagan says. “And if you can give that a little bit more of a touch, a little bit of cuteness, you can tell a story. It’s all about personality — know the story, know exactly why you’re an Irish pub over an English pub or an Italian, and so on … I think people feel very comfortable in pubs, particularly Irish pubs, because the expectations on them are ordinarily quite low.”

I stopped into Donegan’s on a trip to Ireland last September and got to see the bar’s retro makeover firsthand. I spent the evening, as one does, alternating between pints of Guinness and drams of whiskey with a handful of Irish-born companions, including Slane’s Conyngham. Townies rubbed elbows with tourists and transplants over stouts, lagers, and locally distilled whiskey, ushering in each new round with an increasingly enthusiastic, “Sláinte!”

At one point, a red-nosed older gentleman stood up, made his way to the door and, unprompted, began belting out the first few lines of “Wild Mountain Thyme.” The entire bar sang him out with a resounding, “Will you go, lassie, go!” It was the perfect close to an authentic Irish evening.

Fake-Real Irish Pubs Around the World

Next time you find yourself hankering for a strangely familiar bar experience, here are a few notable Irish Pub Company projects.

Built in 2016 and decorated to resemble a 19th-century Irish pharmacy, this rustic outpost claims to have the longest bar in Russia, at a whopping 16 meters (approximately 52 feet).

This massive tourist attraction is more of a theme park than a standalone pub, with cobblestone paths, stylized storefronts, a giant stage for performances, and plenty of spots to eat and drink.

This brewery-style pub was constructed in 1995 and modeled after an 18th-century brewpub, complete with a vaulted ceiling, repurposed copper brew kettles, and other period paraphernalia.

Opened in 1992, this three-time Guinness Irish Pub of the Year winner is located inside the Hackescher Markt S-Bahn station, making it a prime after-work destination. The main bar has an intriguing cavernous vibe while the other two rooms reflect different period styles.

Each of Fadó’s 11 locations was designed in partnership with the Irish Pub Company, and this laid-back River North addition, known for its antique bar and other traditional touches, has been drawing crowds since 1997.

Touted to be the largest Irish pub in Europe, this 1995 iteration was inspired by a historic town in County Cork. The building’s facade was made to look like an old street and features fake storefronts, including a post office, haberdashery, candy store, and tackle shop.

The article Your Local Irish Pub, From Dublin to Dubai, Proves You Can Prefab Authenticity appeared first on VinePair.