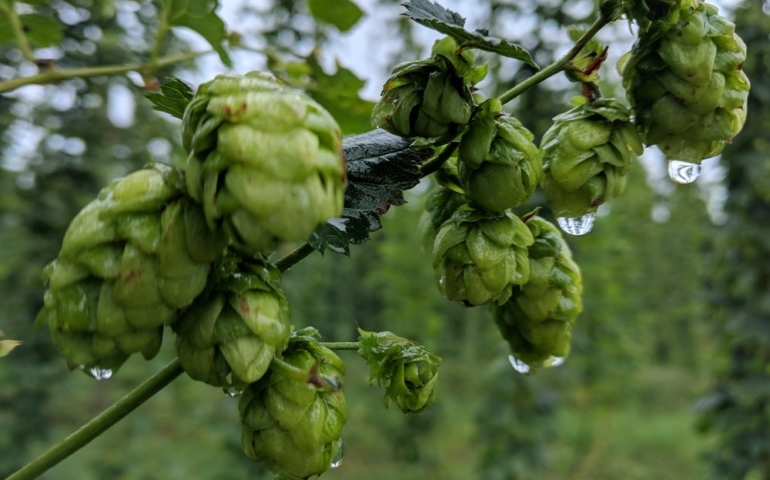 All photos by Kevin Gibson.

Pure Mitten is part of a growing crop of lupulus farmers in what can be a difficult industry and a challenging, at times, climate. Hop Farms in Michigan generally employ a core group of people to run the day-to-day business, hiring seasonal workers when needed. Autumn harvest is one of those times, but day-to-day operations are still particularly challenging, with long days and nights. “I worked 93 hours last week,” he tells a group of visitors to the 11-acre farm in Coopersville, Mich. “I’ll probably do about the same this week. We’re so close to being done; I’m ready for it to be done.”

At Hop Head Farms in Baroda, Mich., hopyard manager Matt Gura takes a group into a small control room just above where the crop from his 190-acre farm are drying, preparing to be pelletized and shipped. A small couch is where he often has slept; under a table is a box of video games for down times. During harvest, those games go untouched. Drying, he explains, can make or break a harvest season and, potentially, even an entire business. “For 35 to 40 days,” he says, “I don’t leave here.”

During the week when this tour of beer writers visited from around the country, the weather in Western Michigan was rainy – this followed a hot, humid summer stretch. Humidity of whatever kind makes drying hops evenly a difficult task, which makes it even more imperative he is on hand nearly around-the-clock.

One of the crops at Hop Head is Cashmere, a hop that is good for both bittering and aromatics, showcasing smooth bitterness with notes of lemon, lime and melon. Gura opens a bale to show us what a properly-done “wet” hop looks and smells like. Quality, not just processing, is always the hop farm’s primary goal, from planting to final pelletizing. Hey, craft beer drinkers only want the best.

He breaks open a cone and rubs it in his hands, taking in the resulting aromas and encouraging all in attendance to gather around and join in. “It’s just like the human body,” Gura says. “Good nutrition means your immune system is going to be strong.”

While Washington state, in particular Yakima Valley, is America’s top producer and supplier of hops, Michigan’s farms are catering primarily to those breweries who are interested in keeping their beers as local as possible.

Founders Brewing Company of Grand Rapids is using Michigan hops to brew this year’s Harvest Ale, sourcing from several farms, including Hop Head, Pure Mitten and MI Local Hops in northwestern Michigan. Competition is fierce, especially when talking about classic hop varieties such as Cascade and Centennial, with prices at all-time lows.

“It’s $2 a pound, and it’s only getting worse,” says Mike Moran, the sales and marketing manager for MI Local. So, selling to Michigan breweries – and there are plenty – is the perfect angle. “Everyone wants to promote local these days,” Moran says.

“The Michigan hop industry is so young,” says Diamond Deschaine, research and development brewer at Founders. However, a quality control board involving many of the state’s breweries is helping it down the path. Farmers and brewers alike stand to benefit from the Michigan hop industry being successful, especially with the growing demand for hops.

Deschaine tells the story of having bales of wet hops – hops that haven’t been pelletized to become “dry” hops – shipped from the West Coast, only to open them and find many of them to be unusable. At the Michigan farms, he says, “They’ll pick them at 6:30 in the morning, drive them to the brewery, and we’ll be brewing with them by 9:30.”

Back at Pure Mitten, Dieleman and a couple of workers are demonstrating how their hops are harvested – it’s an old-school method involving a tractor and a wooden lift – a three-person job wherein vines are cut from rows upon rows of trellises. When they’re brought back to the processing plant, they go through a picker that separates the cones from the vines. They then go through quality control, which essentially consists of the hops going down a conveyor belt while two women pick through to take out any bad ones. It’s a small, family operation right down to the core.

“The ladies doing quality control are some ladies my mom knows,” Justin says in passing. Mom Mary Dieleman and Dad Morrie also are involved, as well as Justin’s brother-in-law, Jay Camp. As he speaks, the day’s harvest is going through the picker and will soon go into the dryer – which Justin and Jay built by hand. Everyone down on the farms in Michigan will sleep well on this night, and even better once harvest season is over and the hops are sold.