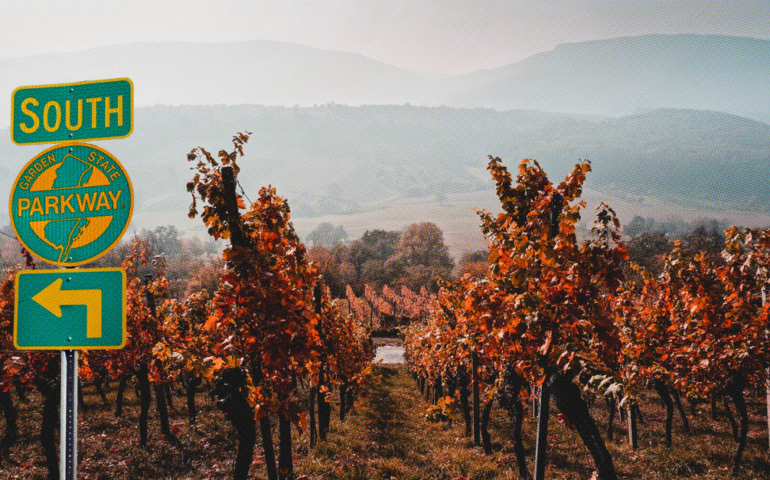 “Starting tonight, we will only serve New Jersey wines in this house.”

Tammy Murphy, wife of New Jersey governor Phil Murphy, made this announcement to local politicians and wine industry professionals at the New Jersey Wine Competition awards ceremony in November 2018. The house she referred to is Drumthwacket, the official residence of the governor.

The New Jersey wine industry, with its 50-plus wineries, has rightfully come into its own. Over the past two years, New Jersey wine has been garnering national attention for top-rated bottles like William Heritage Winery’s 2014 Vintage Brut and Beneduce Vineyards 2015 Pinot Noir. William Heritage is a winery in the southern part of the state, and Beneduce is farther north.

“We have two very distinct wine regions within an hour and a half of Philadelphia or New York,” Audrey Cross-Gambino, owner/winemaker of Villa Milagro Vineyards in Finesville, says. The two metropolitan areas provide New Jersey’s natural north/south divide, and advocates say there are good bottles to be found all up and down the state.

Villa Milagro is in the Warren Hills AVA, a small region with five wineries near the Delaware River in western New Jersey. Along with some wineries that fall outside of the AVA’s bounds, it is part of Vintage North Jersey, a collaboration of 10 northern New Jersey wineries in Sussex, Warren, Hunterdon and Mercer Counties.

“The wineries in the north benefit from limestone and glacial soils as well as the presence of rivers and lakes that provide a modulation in the weather,” Cross-Gambino says.

Most of the wineries in the top half of the state are small, family-owned and -operated. Walk into any and you’re likely to find wines made with Cabernet Franc, Chambourcin, Chardonnay, and Riesling. Cross-Gambino, who studied oenology at UC Davis, focuses on European varietal blends grown with organic and sustainable practices.

Not far from Villa Milagro is Alba Vineyard, with a focus on estate-grown wines and a critically acclaimed Cabernet Franc. The winery also has stunning views of the Musconetcong Valley, a beautiful new tasting room, and a pizza oven run on the weekends by the Altamarea Group, a restaurant group that also owns NYC’s Michelin-starred Ai Fiori and Marea.

Slightly below lies Unionville Vineyards in Ringoes, a winery that recently celebrated its 25th anniversary. Unionville has six estate vineyards spread out in three counties. This allows them to craft terroir-driven wines made from Chardonnay, Pinot Noir, Syrah, Riesling, Viognier, Cabernet Franc, and more, all from where the grapes thrive the best.

When you go to the southern part of the state, the large Outer Coastal Plain AVA and its recently created sub-AVA, the Cape May Peninsula, are greatly influenced by sandy soils and proximity to the Atlantic Ocean. Wineries such as Natali Vineyards and Willow Creek Farm & Winery are concentrated around the Victorian beach town Cape May, others cluster around the town of Hammonton, and there are several more throughout southeastern New Jersey .

Amalthea Cellars in Atco, on the western edge of New Jersey’s famed Pine Barrens, has produced fine wines since 1976. Founder Louis Caracciolo built on what he learned while working at Bordeaux’s famed Chateau Margaux to craft Bordeaux-style wines such as Europa 1. The winery also has a wine-on-tap program with a blend that changes each season.

Connecting the north and south, the Winemaker’s Co-Op is a group of five wineries – William Heritage, Beneduce, Unionville, Working Dog Winery in Robbinsville, and Hawk Haven Vineyard in Rio Grande – that works together to promote the fine wine movement in New Jersey, a state not historically associated with quality juice. The co-op holds not-to-be-missed portfolio tastings twice a year, each winery taking a turn to host, to showcase the increasing quality of New Jersey wine.

“What I’m most excited about,” says John Cifelli, executive director of the co-op, “is how quickly things are accelerating. Any wine region when they got started probably had a learning curve to climb. I think New Jersey wine is climbing quickly. As we are learning rapidly, our wine is getting known rapidly.”

A list of the state’s wineries and events can be found on the Garden State Wine Grower’s Association website.

(New Jersey wines are difficult to find outside the state, but each of these wines can be purchased online.)

Grüner is emerging as a winning varietal for the East Coast. This bottle has citrus and pear and is a bit peppery with high enough acidity to pair with a variety of foods. Average price: $16.00.

This small-production wine (only 634 bottles) has berry on the nose and palate, with intense raspberry notes, pepper, and a long, subtly oaky finish. Average price: $39.99.

This full-bodied Cab spends 30 months in oak. A little smoky with black and purple fruits, mushrooms, and firm tannins, making it a perfect pairing for beef. Average price: $30.95.

This dry, fruity Gewürztraminer has light citrus flavors plus green tea and saffron. Pair it with spicy Thai or Indian foods. Average price: $25.00.