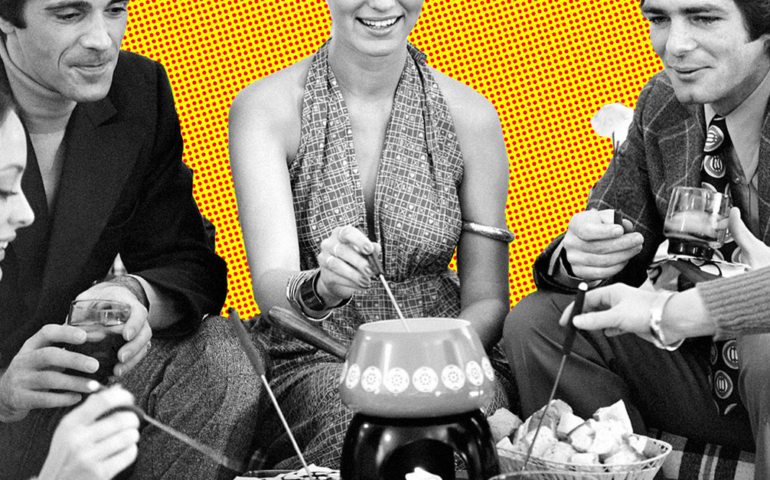 Perform a quick online search for “Swiss cheese,” and it takes some serious scrolling to find something other than deli-sandwich-y stuff with holes. If, however, you search for “how many kinds of Swiss cheese are there,” the first result tells you there are approximately 450. If this leads you to conclude that highly organized forces are conspiring to keep you from all the great cheeses Switzerland has to offer — well, you actually wouldn’t be too far off.

In 1914, as World War I began to ravage Europe, a group of Swiss milk producers, cheesemakers, and exporters joined forces to create Schweizer Käseunion AG, or the Swiss Cheese Union, in an attempt to keep businesses afloat during tough economic times.

“Switzerland was fearful that the war would dismantle their dairy industry,” Michelle Viera, cheesemonger and blogger at Columbus Curd Nerd, says.

They were right to worry. The cheese industry in Switzerland struggled the next several years. According to a 1918 report from the U.S. Department of Commerce and Labor, from 1915 to 1916, total cheese exports decreased from 9 million pounds to 3.9 million. The Swiss Cheese Union received official government backing. In 1918, the government “issued an order prohibiting the free exportation of cheese” during the war without special permission. Cheesemakers had to fall in line with Swiss Cheese Union regulations or suffer the consequences.

It was almost immediately effective. According to a 1922 issue of the Wholesale Grocery Review, an American trade publication at the time, the cheese industry was one of the very few Swiss industries to improve in 1921. The Swiss Cheese Union had reportedly “circularized all manufacturers and dealers and milk producers emphasizing the necessity of manufacturing only first-quality cheese.” The report continues: “The circular calls attention to the carelessness of manufacturers at the present time to put an inferior product on the market and gives as a reason for it the continuation of the practice which naturally came into vogue during the war when practically all food products were of inferior quality.”

In modern-day English, the Swiss Cheese Union sent out a memo essentially saying, “You people are making bad cheese, which is sort of understandable because we just went through a war and it was hard to make good cheese then. But this stops now.”

From there, the union set prices for cheese and milk, and quotas for both. Whereas Switzerland had made around 1,000 kinds of cheese before, the union “restricted production to Switzerland’s three dominant cheeses: Emmentaler [the stuff with holes], Gruyère, and Sbrinz,” according to “The Oxford Companion to Cheese.” A few other cheeses, like Appenzeller and Raclette, were eventually allowed years later.

NPR tells the story of Sepp, a cheesemaker who applied to make Sbrinz, a hard cheese similar to Parmigiano, in the mid-20th century. It took eight years to apply, and the final ruling from the Swiss Cheese Union was no, he could not make Sbrinz because “you do not fit into the envisaged structures.” That was all he got.

Many small cheesemakers went out of business, and those who didn’t had to be creative. Sepp started experimenting with soft, small-format cheeses and selling them directly to hotels and small restaurants near him, since he wasn’t permitted to sell unapproved cheeses to big distributors or exporters.

The Swiss Cheese Union may have been founded to aid homegrown cheese, but was growing into “a hyper-focused, highly marketable national selection at the expense of erasing the identity of local and regionally prolific dairies,” says cheese educator and Certified Cheese Professional Caitlin O’Neill.

For cheesemakers who could fall in line and crank out what was required, however, the benefits were vast. There were guaranteed customers and margins, and if revenues fell short the government (read: taxpayers) made up the difference. Approved cheeses were marked with the seal of the Swiss Cheese Union, which the marketing arm of the organization pushed to be seen as the ultimate marker of quality and consistency.

Every powerful organization needs an approachable emissary, and the Swiss Cheese Union found its in fondue. In the 1930s, the union declared fondue — a bowl of melted Emmentaler and Gruyère, or two of the three allowed cheeses — the national dish of Switzerland. To the modern eater, that may not sound shocking. At the time, it was. It was as if all members of the U.S. shrimp industry had organized, and, with government support, successfully named gumbo the quintessential American meal. What had previously been a regional specialty was suddenly pushed into the spotlight.

Within 30 years, the Swiss Cheese Union had opened an American arm called the Switzerland Cheese Association, whose offices opened on Hudson Street in New York City, then quickly moved to Madison Avenue. At the 1964 New York World’s Fair, Switzerland presented fondue as its national dish.

The union reportedly “purchased cases of fondue pots, burners and fondue forks and sent them to various military regiments or, upon request, to event organizers throughout the country,” Isabelle Raboud-Schuele, fondue expert and former Bulle Gruyère Museum and Library director, writes in the blog Swisster. They started advertising campaigns featuring beautiful blond people eating the “healthy food from the Alps” and proclaiming the social, warming appeal of fondue both throughout Switzerland and the U.S. A slogan, “fondue puts us in a good mood,” soon became an everyday Swiss expression, Raboud-Schuele explains.

“By the 1970s, we were in a period of peak fondue,” writes NPR journalist Robert Smith. If your parents or grandparents have an old, rusting fondue pot in the attic, you now know who to blame: the Swiss Cheese Union.

Not all was well in the Swiss cheese game, though. In the 1960s and ’70s, milk subsidies cost Switzerland more than the entire Swiss Army. Rumors of corruption spread.

The Swiss Cheese Union was officially investigated in 1996, shortly after it sponsored the Swiss National Ski Team (complete with terribly cheesy ski suits). A “Swiss Cheese Scandal” broke, complete with a World Trade Organization press release calling the organization, among other things, a cartel. A former manager of the organization was arrested for involvement in a kickback scheme. The Swiss government pulled its funding of the union and, after 85 years, the Swiss Cheese Union collapsed in 1999.

In the ensuing years, while official dairy subsidies continue, competition has increased among Swiss cheesemakers. This has dropped prices, of course, but it’s also brought about something of a cheese renaissance in Switzerland, with new cheeses like Challerhocker and Scharfe Maxx from old cheesemaking families. Ask a cheesemonger about their favorite cheese from Switzerland and you’ll be met with a smile — and an earful about Alpine terroir, the process of “alpage,” or leading cows up the mountains to graze in the summer, and maybe a favorite fondue recipe (which has outlasted its shady champions).

“At long last,” says author Janet Fletcher, “we are getting a broader view of the country’s cheesemaking talent.”

The article Wartime Sacrifice and the Unholy Aftermath of the Swiss Cheese Mafia appeared first on VinePair.