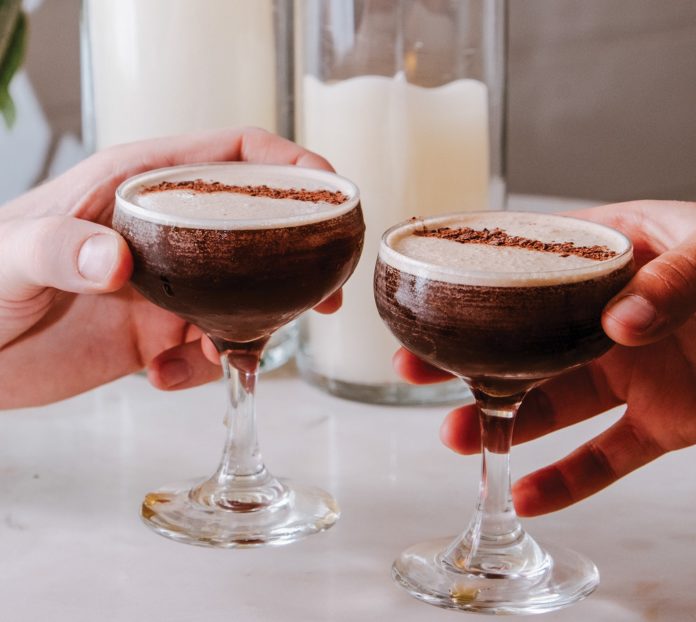 Vodka, the largest spirits category in the U.S., has been getting a run for its money in recent months by faster-growing segments, such as tequila/mezcal and whiskey. But brands and mixologists continue to find ways to generate excitement for the category. So what are the biggest vodka trends in 2022?

One has been a continued shift to larger package sizes at retail. This started in the earliest days of the pandemic when shoppers stocked up for home consumption.

“We’ve seen a big push into the 1.75’s from the 750s,” says Ryan Sass, vice president of customer development and strategy of national accounts for distributor Southern Glazer’s Wine & Spirits. “It’s gained 3% share since the pandemic started which is a pretty significant increase. I think that’s a pretty important thing because it’s a higher dollar spend.”

The types of vodkas coming out are also evolving, with newer varieties touting “better-for-you” formulations, including all-natural ingredients, no sugar, zero carbs, and less alcohol. Many brands now promote vodkas with more premium or natural ingredients, Sass notes, such as Grey Goose Essences’ line of botanicals, Ketel One Botanical, and Plume & Petal.

“We are seeing these flavor components that are more herbal essence than the traditional, kind of candy sweetness that we saw like five years ago, and sometimes even a lower alcohol content,” he says. Some retailers have even added better-for-you sections in their stores to prominently display lower-alcohol items together, he adds.

Flavored vodkas overall have grown 5% of share on the online alcohol ordering and delivery platform Drizly since 2019. Citrus flavors dominate, as the subcategory is led by brands such as the lemonade-inspired Pink Whitney by New Amsterdam vodka, Deep Eddy Lemon vodka, Ketel One Botanical Grapefruit, and Rose, Deep Eddy Ruby Red vodka, and Absolut Citron vodka.

“Some of the flavors have been really taking off,” says Tasha Zonski-Armijo, manager and owner at Jubilation Wine & Spirits in Albuquerque, NM. Lavender-flavored vodkas, in particular, are having their moment, she says.

“Deep Eddy has some really amazing flavors, like their lime and their cranberry,” Zonski-Armijo adds. “Those have been doing really well.”

She also observes that regionality plays a role in flavor preferences. New Mexico, for instance, veers towards spicy flavors. “One of our big things is green-chili-infused vodkas. A lot of people will use that for their Bloody Mary.”

Vodka is “a blank palette on which I can create really cool infusions,” says Nick Apostolopoulos, the company’s president. 619 also tries to work with local suppliers, procuring coffee from a local roaster who creates a special blend just for them, and buying rose petals from a nearby farm.

Another brand called Good Vodka combines vodka with an innovative message about sustainability. The company produces its vodka using the skin and pulp of the coffee fruit that is typically discarded. “It’s very clean and crisp, but it’s got a hint of a coffee note in the background,” says Zonski-Armijo.

Anchorage Distillery in Alaska uses local barley to produce its vodka, which lends it a touch of sweetness and nuttiness. The company recently began using a new form of charcoal filtering, “just to add a little bit more smoothness to it, to take some of the heat out of it,” says it’s Chief Revenue Officer Skyler Fancher.

Anchorage’s lineup features several vodkas, including a cranberry made exclusively for the Princess Cruise Line, and a ghost pepper vodka. “It’s one of the hottest peppers in the world,” says Fancher. “A lot of people love it for Bloody Marys or spicy Margaritas.”

At Jubilation Wine & Spirits, Zonski-Armijo has seen brisk sales of ready-to-drink cocktails, many of which are vodka-based. For example, the Newport, OR-based Rogue Spirits offers an extensive line of RTDs, including an Espresso Martini, a Lemonade Iced Tea Vodka Soda, and a Ginger Lime Vodka Mule, to name a few.

And Landsdale, PA-based Boardroom Spirits recently announced a new 750-ml. bottled cocktails that include Lansdale Lemonade, made with Boardroom’s vodka, and Spring Garden, which is a combination of its citrus vodka, ginger vodka, C (the distillery’s carrot spirit), along with cucumber and citrus notes.

Cardinal Spirits, a craft distillery in Bloomington, IN, recently introduced its Double Vodka Soda with a splash of cranberry and a squeeze of lime. “We casually polled our fans on social media about what kind of vodka canned cocktail they’d like to see from us next, and cranberry and lime was the clear winner,” says Jeff Wuslich, the company’s co-founder.

Despite vodka’s dominance on retail shelves and restaurant bars, agave spirits have been gaining on it. Tequila and mezcal’s revenue rose 30.1% in 2021, to $5.2 billion, compared to vodka’s 4.9% increase to $7.3 billion, according to the latest Distilled Spirits Council of the U.S. (DISCUS) data. Vodka volume increased just 1.6% in 2021 compared to a 20.8% hike for tequila/mezcal and a 4.5% rise for whiskey.

Vodka’s share of all liquor sales on Drizly slipped from 30% in 2019 to 23% today. What’s more, 80% of respondents in Drizly’s annual retailer survey stated that they plan to carry more tequila in 2022, 40 points ahead of those who plan to stock more vodka.

“Tequila currently ranks just six percentage points behind vodka at 17% of liquor share on Drizly,” says Liz Paquette, the company’s head of consumer insights. “If tequila’s trajectory continues, sales of the Mexican mainstay may surpass vodka at some point this year on Drizly.”

Another wildcard for vodka is the war in Ukraine since so many brands are tied to that part of the world. For example, Stolichnaya already changed its name to just Stoli, and some stores removed Russian vodkas from their shelves altogether.

At the same time, many bars and restaurants have adjusted either what they’re serving or how they’re doing so. “Our sales have not changed, but we have altered our menus to reflect [the Ukraine situation],” says Alli Torres, general manager, and mixologist at Freehold Miami. “For example, we now feature Vodka Mules in place of the former Moscow Mule. This has been seamless and welcomed.”

Some retailers have also felt the pressure. “We had several calls from the media asking us if we were going to take a stand and take Russian vodka off [our shelves],” says Zonski-Armijo.

Jubilation kept the Russian vodka brands but doesn’t promote them. As a small business, Zonski-Armijo notes, “we sort of just took the position that we’re here to just sell vodka; we’re not here to make a political statement.”

How big of an impact all of this will have on the category, and who stands to benefit, remains to be seen. But Drizly’s vodka brands of Ukraine origin, such as Nemiroff, Khor, and Kruto, have gained a share since February 2022. In fact, Khor was the third-fastest growing vodka brand on the platform for the first quarter of 2022.

But the overall top-selling vodka brands on Drizy this year — Tito’s, Smirnoff, Grey Goose, Ketel One, and Svedka, respectively — have shown little shakeup. Category leader Tito’s celebrated its 25th anniversary this past April.

“People love supporting their home country, so a great-tasting, authentic, American-made product like Tito’s Handmade Vodka continues to perform well,” says Frank Polley, the brand’s vice president of trade marketing. “Consumers continue to look for brands that are high quality and consistent and ones they feel they can trust.”

Tito’s is the best-selling vodka at Freehold Miami, followed by Blank Vodka, which Freehold the restaurant uses as its house well. As far as vodka cocktail trends, Torres has noticed “people drawing back and simplifying.” This means “less flavored products, more cleaner drinks, and an uptick in classic Martinis.”

Freehold takes pride in its Espresso Martini, she says. “We pride ourselves on integrating our coffee program into our beverage menu, and what better way than a perfectly curated homemade Espresso Martini?”

Natalia Farfan, bar lead at The Lark in Santa Barbara, CA, features as many local craft distilleries as she can. These include St. George Spirits in Alameda, CA; Corbin Cash in Atwater, CA, which features sweet potato vodka; and Cutler’s Artisan Spirits, which is located near The Lark.

“You always want a vodka cocktail on the menu to create balance,” Farfan says. “In my experience, refreshing is always the best way to go.”

The Whistler in Chicago currently offers the Edge of Tomorrow, an $8 punch-style drink comprised of vodka, dry vermouth, lemon, house-made cinnamon syrup, and a bar spoon of Branca Menta. “Because Branca Menta can be so overpowering, using it with the vodka and dry vermouth gives it just that nice little subtle flavor profile,” says head bartender Alex Barbatsis.

“We always have vodka on our menu because it’s super popular and it also helps keep costs down,” Barbatsis adds. “A bottle of vodka is always going to be cheaper than pretty much any other spirit you’re going to be able to get your hands on.”

What’s more, he says, “if one of your cocktails with vodka has a 12% cost, then your 18% or 20% cost mezcal cocktail will kind of balance out on your menu so you can splurge in other places too.”

At The Violet Hour in Chicago, general manager David Branch favors brands such as Reyka from Iceland and Haku Vodka out of Japan that he says, “are a little bit more terroir- or artisan-style driven, that has texture and good feel and minerality that will stand up to classic cocktail builds.”

Reyka, for instance, “has this really cool volcanic minerality to it that allows you to make something similar to a Manhattan by using vodka and provides that structure, which you won’t get with something mainstream.”

At The Brixton in San Francisco, the Cucumber Basil Gimlet, featuring Grey Goose vodka, Veev acai liqueur, lime, basil, and cucumber, has been on the menu for more than 10 years and remains among the top two best-sellers.

“I think the softness of how that drink comes out is why it’s been so popular,” says The Brixton Managing Partner Adam Snyder. “It’s clean, it’s fresh and I think that’s what people always wanted, but it’s more so now than ever.”

619 Spirits offers several vodka-based cocktails at its restaurant and bar. The Pickle Tickle is made from its 619 Pickle vodka, lemon juice, lime juice, simple syrup, and tonic. The Blood of the Scorpion consists of orange, grapefruit, and 619 Scorpion Pepper vodka.

As much as people love vodka, the category doesn’t generate the excitement of tequila, bourbon, and others; it doesn’t have much of a story. Sass of Southern Glazer thinks that more education about the differences between the ingredients that go into vodka could help boost the category.

“Vodka’s sometimes thought of as this ‘odorless, colorless, tasteless spirit, but there is this variation in flavor profile based off the way it’s made,” he says. “I don’t think we spend enough time talking about the base ingredients” such as wheat, corn and rye, potato, and explaining the different experiences and mouthfeel your get from each one of those products.

The industry needs to help consumers realize all of vodka’s potential as a spirit with depth, Sass notes. “There’s no age statement in vodka, so it’s difficult sometimes to let people understand exactly what that next tier of product is.”

At the Lark, Farfan likes to highlight new and unique vodkas so that “people get to try something that they otherwise would have never tried.” One example is a green chili vodka that she uses for Dirty Martinis, which has surprised and delighted many guests.