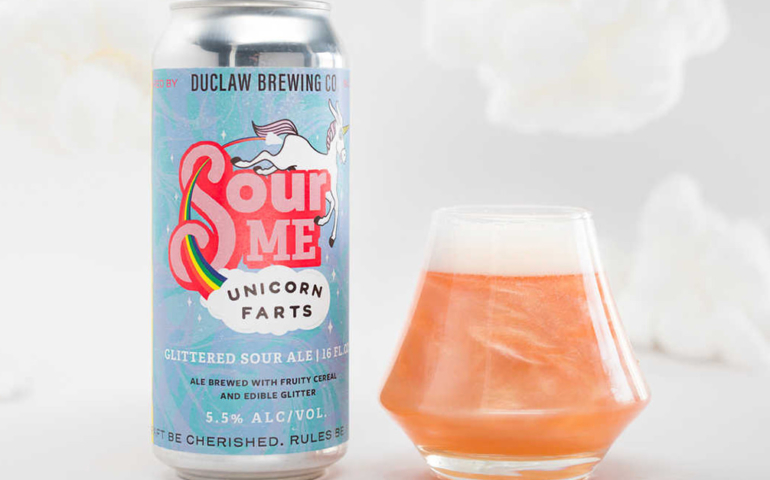 What do you get when you mix sour beer, glitter, unicorns, and Fruity Pebbles? You get the latest from DuClaw Brewing: Sour Me Unicorn Farts, a sour ale brewed with fruity cereal, edible glitter, and mythical flatulence, according to a recent announcement.

The Baltimore-based brewery says the beer is inspired by Diablo Doughnuts’ Unicorn Farts, a vanilla-frosted doughnut dipped in Fruity Pebbles, Thrillist reports. The fantastically flatulent beer, originally announced by DuClaw in February, will debut at a pre-release party at the brewery on March 16, 2019.

Also launching at the party will be DuClaw’s The PastryArchy Creme Brulee Imperial Brown Ale, which sounds delicious as well. A portion of proceeds from the event will benefit the Pride Center of Maryland, which in our opinion, is the best part of this rainbow-washed explosion.

A Fruity Pebbles beer may sound out of this world, but it’s been an exciting few weeks for East Coast beer lovers with penchants for nostalgic cereals. In February, Smartmouth Brewing of Norfolk, Va. announced the launch of Saturday Morning IPA, a Lucky Charms-inspired beer brewed with marshmallows “inspired by” the famous cereal. The beer was an extremely successful marketing stunt, and VinePair was lucky enough to try it. Wondering how it tastes? Read our review of the beer here.