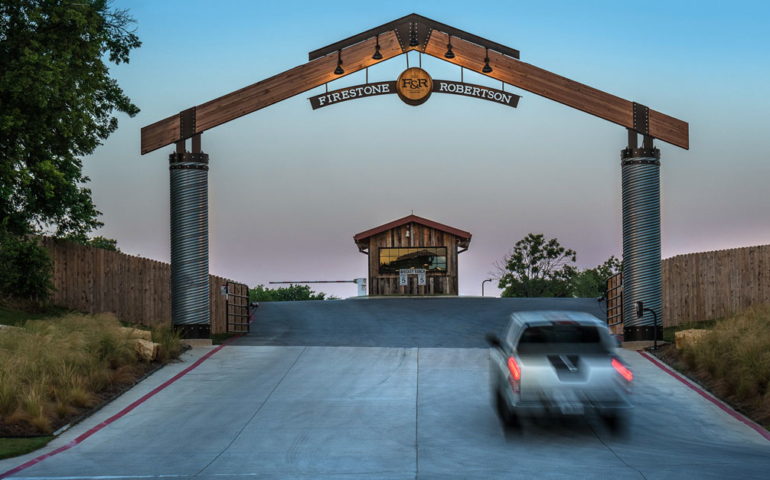 Once associated almost exclusively with Kentucky and Tennessee, American whiskey is now being made coast to coast, and many places in between. This proliferation, and the popularity of brown spirits in general, led to an 8.1 percent increase in American whiskey sales in 2017, according to the Distilled Spirits Council.

Helping lead that charge is Texas, which has the fourth-most craft distilleries in the country — and a real thirst for whiskey. Balcones Distilling, based in Waco, kick-started Texas’s whiskey-making reputation a decade ago and is now a household name. These days, no one is pushing the scene forward faster or with more ambition than Fort Worth’s Firestone & Robertson Distilling Co.

Leonard Firestone and Troy Robertson, acquaintances with a shared vision for making whiskey, founded the label in 2010. Though they were new to the business and comprised the entire staff, the founders had big dreams.

“Texas is the second-largest market for whiskey [in America], and when we got into it, barely any was made here,” Firestone says.

“If you’re in Texas, you’ve got to carry it,” Fort Worth bar owner Brad Hensarling says of TX Whiskey.

They set up shop in a 1920s warehouse south of downtown Fort Worth, and began making spirits themselves. Their first release, the aptly named TX Blended Whiskey, took two years of sampling and tinkering before they decided on the perfect recipe. It debuted in 2012 and quickly took home the “Best American Craft Whiskey” award along with a “Double Gold” medal at the 2013 San Francisco World Spirits Competition.

It was followed four years later by TX Bourbon, which is made from local grains and a proprietary yeast strain captured from a Texas pecan, and is distilled and aged on site. The first batch of TX Bourbon comprised 1,500 bottles and sold out in days.

It was clear, then, that the distillery needed to expand. So, Firestone and Robertson did what any small business owners would do: They bought a defunct 18-hole golf course, refurbished it, and built a 112-acre wonderland on the grounds called Whiskey Ranch, complete with a distillery, tasting room, event space, and barrel warehouse. It opened in late 2017.

Now, the plucky enterprise makes the best-selling craft whiskey in Texas and operates the largest whiskey distillery west of the Mississippi River. Measured by distilling capacity volume, Firestone & Robertson can produce up to 135 full-size barrels of whiskey per day, making it the biggest player outside Kentucky, Tennessee, and Indiana, which is home to liquor-making behemoth MGP Ingredients.

The company refurbished an 18-hole golf course to build its 112-acre Whiskey Ranch, which has a distillery, tasting room, event space, and barrel warehouse.

If you ask the founders, that’s just how they wanted it.

“We set our sights on the big guys,” Robertson says. “From the beginning, we wanted to compete at the highest level.”

Part of the company’s growth has been fueled by adoption across the state. TX Whiskey, especially, is a mainstay on bar shelves, from whiskey-heavy cocktail joints like the Standard Pour in Dallas to the Ritz-Carlton’s Rattlesnake Bar and even casual music venues. As of this writing, Firestone & Robertson products are sold in more than 1,100 bars and restaurants across the DFW metroplex and 3,500 accounts across Texas.

“If you’re in Texas, you’ve got to carry it,” says Brad Hensarling, proprietor of the Usual, a cocktail bar, and the Chat Room, a lovable dive, both in Fort Worth. “People call for it.”

Hensarling believes Firestone & Robertson has “seriously displaced” Crown Royal in his bars. “Crown sales have been cut in half, and most of those drinkers have gone over to TX Whiskey,” he says. “It’s about the same price point, easy drinking —especially if you’re new to whiskey — and their labeling is great.”

Distribution goes beyond Texas, too. Firestone & Robertson is available in 16 states, at U.S. Army, Air Force, and Navy bases across the world, duty free stores in DFW Airport, and even aboard Carnival and Disney cruise ships.

They don’t show any signs of slowing down. Master distiller Rob Arnold, a Kentucky native with degrees in microbiology and biochemistry, is currently hard at work creating a 100 percent rye whiskey from grains grown about 50 miles south in Hillsboro, Tex. Like the bourbon, the rye is aged on site and will only be released when he deems it ready. With the oldest barrels already four years old, Arnold is eyeing a 2020 release date.

Leonard Firestone and Troy Robertson founded the label in 2010. “From the beginning, we wanted to compete at the highest level,” Robertson says.

Visit the distillery now, and you might mistake it for one of Kentucky’s powerhouses. On Thursdays, Fridays, and Saturdays, the distillery welcomes the public in for tours, and the on-site bar pours samples and makes cocktails.

Still, Firestone and Robertson are determined to stay true to their brand DNA. Each bottle is still hand-corked with caps made of beechwood and repurposed boot leather, a practice that began in Robertson’s garage. Now, it takes a team of employees to handle the volume.

“We hadn’t done this before, so we didn’t have that scar tissue,” Firestone says. “We did things others didn’t because we didn’t know any better. And, for the most part, it’s worked.”