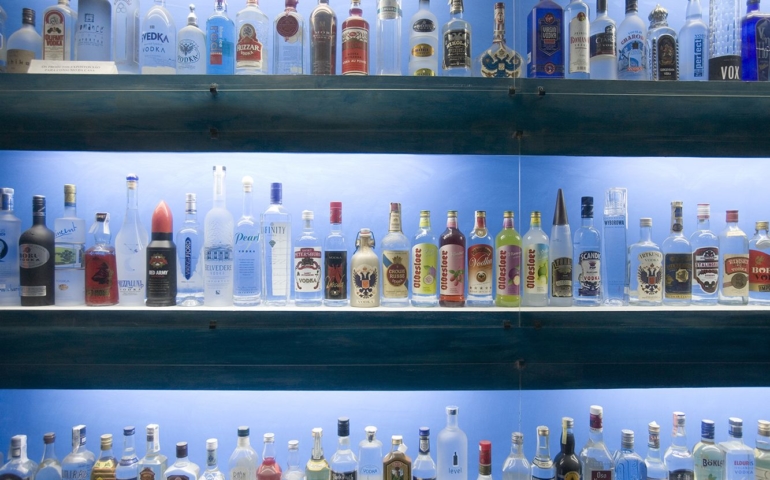 Flavored vodka has become extremely popular over the last decade. Like some long-lost room in Willy Wonka’s factory, if you can imagine a flavor, it is probably in a vodka somewhere. The flavors run the gambit from citrus-inspired infusions to heavier flavors like dark chocolate. Flavored vodkas come bottled, ready to drink but also can be created at home or the bar with infusions – usually consisting of fruits or herbs that have been kept in a bottle of plain vodka and then strained.

How Did Flavored Vodka Start?

Flavored vodkas can trace their origins to before the 13th or 14th century. Polish vodkas can trace “flavorings”, like herbs or local grasses, to an attempt to mask the harsh taste of the original vodkas. It was less an attempt at making vodka fun and a good cocktail base, and more about making it even tolerable. Many of the herbs or roots used in these vodkas were thought to be medicinal, adding further encouragement to drink the often frowned upon vodka. Once vodka distillation became more refined, the “flavored” vodka scene went dormant for quite some time. In fact, the first modern flavored vodka was introduced in 1986 by our friends at Absolut. Let’s take a look at the original flavored vodka and nine of the other strangest vodka flavors out there.

While bacon is often found in the Bloody Mary as an accouterment, I am not sure how it would do as a straight-up vodka flavor. Part of the fun of strange vodka flavors is challenging the creativity of barkeeps everywhere. Bakon branded vodka, a potato-based variety, will certainly put even the most creative more cocktail to the test.

A childhood favorite has crashed the alcohol scene in a big way with the PB&J inspired flavor from Van Gogh vodka. Mixed with some form of cream and served with a slice of white bread, this flavor could be a hit for those searching for a little bit of nostalgia. Otherwise, it may just be one of the strangest vodka flavors you have ever seen!

What’s the big dill with this flavor, created by Naked Jay? Well, it tastes like a pickle, so there’s that. While an unusual flavor, I could certainly see a pickle-flavored vodka being more than just a unique bottle on the shelf. Pickle juice has found its way into many cocktails like the Bloody Mary and dirty martinis. It does not get much easier than simply adding a pickle-flavored vodka to the mix!

Have you ever been to a hot wings place that makes you sign a fake disclaimer because of how hot their hottest flavor is? Well, welcome to the same principle in vodka form. The Hot Enough Vodka Company has brought all the heat to the table, using Naga Jolokia chilis and their outrageously hot flavor. Topping out at 100,000 on the Scoville scale of hot (while jalapenos sit at a measly 5,000), this is the perfect vodka for all those out there who like it hot, hot, hot. Otherwise, avoid this strangest vodka flavor at all costs.

Is there anything stranger than mixing the flavor of two distinct liquors together? Well, here we have it. A blend of vodka with the taste of brandy presents a unique blend. In this rare case, it is a vodka flavored with another spirit. Exclusiv vodka has become known for its interesting flavor combinations, and this is just one of many.

A vodka inspired by another childhood favorite, Loopy from Three Olives Vodka, provides us the taste even the toucan himself would love. With all the citrus notes, adding cherry and sugar cane, this vodka lends itself to a cocktail reminiscent of slurping the colored milk from the bottom of the bowl.

Skip all the inherent dangers of eating raw cookie dough and have a shot of vodka instead! This now-defunct option from Pinnacle Vodka brought a whole new flavor to the White Russian (think chocolate chip cookies and milk). While no longer in production, there may be a bottle or two out there somewhere to surprise your guests with your creativity as a fun nightcap.

As if single chocolate weren’t enough, 360 Vodka ups the ante with their Double Chocolate blend. While chocolate is definitely one of the strangest vodka flavors out there presented solo, it makes for plenty of great cocktail varieties. A chocolate-covered cherry drop or espresso martini could use the help of this fine double chocolate selection.

With a strikingly similar flavor to a certain gelatinous candy with a Nordic name, this flavor from Hard Luck Candy vodka brings a nice berry flavor to the mix. It’s not hard to envision a Red Fish martini, adorned with a Swedish Fish for a striking garnish.

While this may have been a list of the strangest vodka flavors out there, it can certainly inspire creativity for some show-stopping cocktails. Unique, or strange, flavors steal the show in cocktail bars nowadays, so don’t be afraid to take a risk or two with these outrageous varieties.