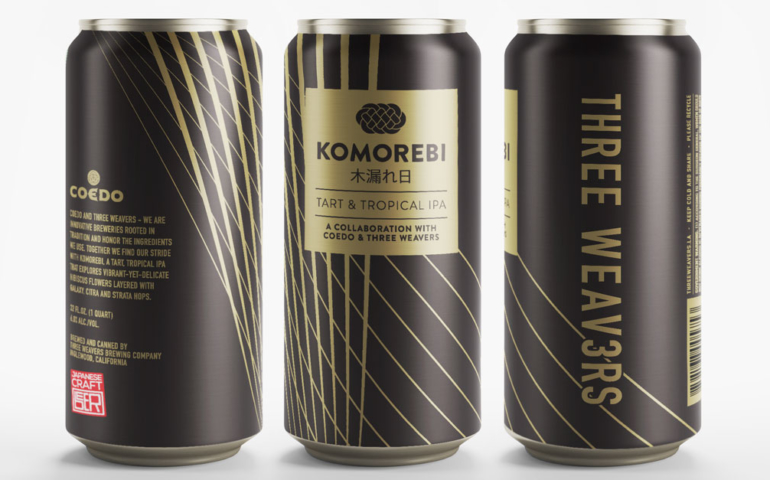 Three Weavers Brewing of California and COEDO Brewery Kyodoshoji Corp., Ltd. Japan recently released a collaboration beer, Komorebi IPA, in partnership with Japanese Craft Beer, an industry association devoted to increasing awareness and promotion of Japanese craft beer in the U.S. The collaboration was facilitated by the team here at VinePair, because who doesn’t love a collab, but also as a way to demonstrate the connection and shared knowledge between these two brewing communities.

The result of this collaboration was Komorebi IPA, a “tart and tropical” IPA brewed with hibiscus, lactobacillus, and a trio of tropical-fruit-flavored hops. It debuted at Three Weavers’ brewery in Inglewood, Calif., on Feb. 27. At the event, Three Weavers and COEDO were joined by more than 100 guests who celebrated the collaboration between the two breweries, as well as the creativity of craft brewers in the U.S. and Japan.

But how does a collaboration even happen in the first place? How do two brewers that are located in different countries actually come together to brew a beer? Let us explain:

According to Three Weavers brewmaster Alexandra Nowell, partnering with COEDO was “easy” because of the breweries’ unified vision. It was also a learning experience.

“The American brewing community can learn a lot from the Japanese in terms of restraint,” Nowell said. “Just because you add a lot of things to a beer doesn’t mean it’s the best beer, and what I think the Japanese have been really adept at is [creating] nuanced, delicate, beautiful beer.”

In preparation for brew day, Nowell and COEDO brewer Yasuki Mizunuma communicated over email to decide on a beer style, as well as choose ingredients that would highlight both American and Japanese craft beer. They decided on an IPA brewed with hibiscus, an ingredient native to Japan, lactobacillus, a microorganism that imparts tartness, and copious amounts of Citra, Strata, and Galaxy hops from the U.S.

“Yasuki was excited to use these American hops that he doesn’t get to see on a daily basis,” Nowell said. “The hops are outstanding, and it was really cool to see someone else as excited about them as I was.”

The collab happened at Three Weavers’ brewery in Inglewood, Calif., with Mizunuma joining Nowell in the brewhouse. “Alexandra emphasized the balance in every beer, and had great sense of beautiful taste,” Mizunuma said. “Moreover, she put importance on the cleanliness of the brewery. I felt that such a point is similar to our brewing method … Craftsmanship has been [a] long-inherited tradition in Japan, and Japanese craftsmen have dedicated seriousness, perfectionism, and cleanliness to manufacturing.”

COEDO and Three Weavers take a similar approach to ingredients. “[T]hey respect ingredients and how they’re used, and you can see the proper expression of those ingredients in the beer,” Nowell said. It also helps to get along personally. “He’s awesome,” she said of Mizunuma. “Super enthusiastic.”

In fact, her favorite part of the collaboration was “working with Yasu,” Nowell added, calling Mizunuma by his nickname. “It’s amazing to bring a new brewer into your brewery, and talk about how they make their beers versus how we make our beers … it always makes for a really great learning experience.”

“One of the designers at CANarchy just nailed it with the packaging,” Nowell added. “I’m happy for that.” The label was designed by the CANarchy Craft Brewery Collective, a collective of seven breweries including Three Weavers.

According to Nowell, the goal of the project “was to showcase Japanese craft beer in the U.S.,” and the partnership has been harmonious. “I take a very romantic approach to recipe formulation, and there’s something about the Japanese language that’s romantic as well,” she said. The beer name, Komorebi, refers to the Japanese word for “the feeling you get when you see light filtering through leaves.”

Beer collaborations don’t only depend on talented brewers, but those who are team players. COEDO is a member of Japanese Craft Beer, an organization including 23 Japanese craft breweries that encourages U.S. consumers to “drink in a new language.” COEDO has also collaborated with U.S. brewers including Stone, Ballast Point, Coronado, and Fieldwork.

“American brewers, innovators of craft beer, have always given us new stimuli. This time, we also learned lots from Alexandra, such as the fusion of hibiscus and tart IPA, which we were excited for the chance [to] brew,” Mizunuma said. “We hope people in the U.S. enjoy delicate and high-quality craft beers derived from the craftsmanship of Japanese food culture.”

This article is sponsored by Japanese Craft Beer.

*To gain more visibility and influence, 23 Japanese craft breweries, including COEDO Brewery Kyodoshoji Corp., Ltd., have banded together to form Japanese Craft Beer, an industry association devoted to increasing awareness and promotion of Japanese craft beer in the U.S.