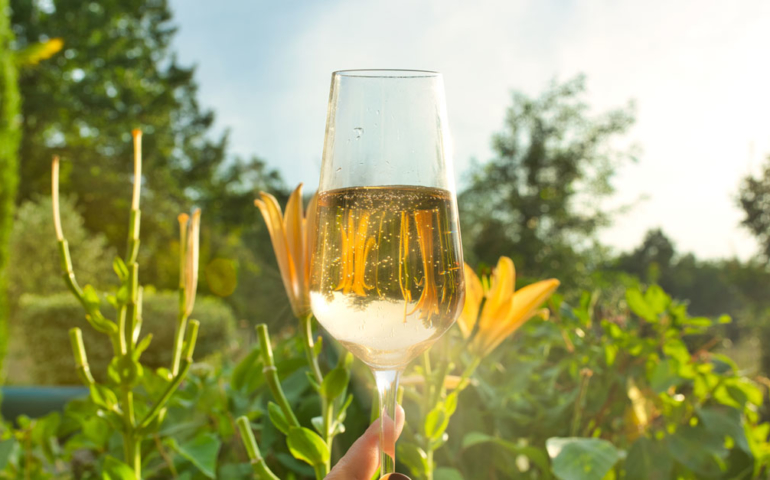 If you live in France and like sparkling wine, you can stop reading here because you’re already drinking all the Crémant d’Alsace. Seventy-five percent of annual production, to be precise, never leaves the country.

If you’re anyone else, this is a story about the ultimate alternative to Champagne. Read, find, consume, you’re welcome.

Like Champagne, Alsatian Crémants are made in the traditional, or classic, method. Secondary fermentation occurs inside the bottle in which its sold, plus aging on the lees, riddling, disgorging. In other words, if you like the creamy yeastiness that characterizes quality Champagne, crémants are for you.

Crémants are made like Champagne in method but not necessarily materials, meaning ingredients, meaning grapes. Crémant d’Alsace can be single-varietal or blends, and can be made from Auxerrois, Chardonnay, Pinot Blanc, Pinot Gris, Pinot Noir, and Riesling. Crémant d’Alsace Rosé is 100 percent Pinot Noir.

Another ingredient that differentiates Crémant d’Alsace from Champagne is terroir. Alsace and Champagne are in the same region, the Grand Est. It was created in 2016 when Alsace, Champagne-Ardenne, and Lorraine merged as part of a country-wide initiative.

Fritsch notes Colmar, one of the region’s major cities, is among the driest in France. And, he says, the northern climate is particularly suitable for the production of the primary grape varieties used in making Crémant: Riesling, Pinot Noir, and Pinot Blanc.

“To the west of the region is the protective border formed by the Vosges Mountains and to the east is the Rhine River, Germany, and the Black Forest,” Jennifer Wagoner, sommelier and wine director at Sepia, an American restaurant in Chicago, says. The region “has been shaped by war and a blending of cultures, but also by a mosaic of soil types that produce expressive whites and structured, elegant Pinot Noirs, many of which are used in the production of Crémant.”

Wagoner, who has been tasting, buying, and selling wine for 13 years, traveled to Alsace last June and fell in love with the local wines all over again. “Alsace itself is a gorgeous region with plenty of sunshine and producers who are making some stellar sparkling,” she says. “It’s a small region, 75 miles long and 3 miles wide, where you have the perfect blend of ripeness along with the mineral freshness that you want in bubbles.”

She adds: “The care that is put into the farming and the passion and history of the wineries is special. It comes through in the wines. They are very conscious of the environment and many producers embrace organic and/or biodynamics. The vineyards are truly alive.”

These factors are important to Philippe Sauriat too. He’s head sommelier and wine director at Gabriel Kreuther, a French-American-Alsatian restaurant in New York City with a casual lounge (tarte flambee!), and formal dining room.

“Crémant d’Alsace is often an interesting blend of grapes you wouldn’t find in other sparkling wines. This makes the flavor more special,” Sauriat says. “I also enjoy the direction of the farming practices of the region which allows for more experimentation from its producers.”

To this native Burgundian, the Alsatian soil variety (he called it a “mosaic,” too, for the record) is reflected in the varying styles of sparkling emerging from the region. “The style of this region is not singular due to so many producers with varying individual practices and styles,” Sauriat says. “A lot of exciting, unusual blends are much more common than you would think!”

Currently there are three Crémants d’Alsace on Gabriel Kreuther’s 1,865-SKU bottle list. Plus, says Sauriat, “We always have a Crémant d’Alsace by the glass that we change every season because we feel it’s important to offer different producers and styles of Crémant.”

At Sepia, where there are 475 wines to choose from, there are currently three Crémants d’Alsace by the bottle and one by the glass. “We currently have an Alsace feature that showcases the region’s wines and they have been very well received by our guests,” says Wagoner. She also manages the 30-bottle list at sister restaurant Proxi where Crémant d’Alsace is offered by the glass and is the featured fizz for Saturday and Sunday brunch.

“Many wine lists may have a Crémant or two by the bottle and possibly by the glass, but not necessarily from Alsace. I find a unique value in this region and a connection with the people and the land,” says Wagoner, adding, “These wines are highly versatile and are becoming more available in both restaurants and in retail.”

Wagoner likes Crémant d’Alsace in a simple white wine glass (more U-shaped than red) and Sauriat takes it a step further by specifying a Riesling glass as the ideal. Though only about a quarter of bottles produced leave France, both sommeliers note the growing availability of Crémants d’Alsace in the U.S., and recommend checking in with your local wine shop to source and order.

“Crémant d’Alsace is delicious and something that you can afford to enjoy on a regular basis,” says Wagoner. “It’s also nice to know that you are supporting a group of producers that are genuinely good people from a part of the world that is, in my humble opinion, quite magical.”

6 Bottles of Crémant d’Alsace to Try

Wagoner and Sauriat share some of their favorite bottles available in the U.S. The first three are Wagoner’s picks, the last three are from Sauriat.

The article The Ultimate Alternative to Champagne Is Versatile, Affordable, and Increasingly Available appeared first on VinePair.