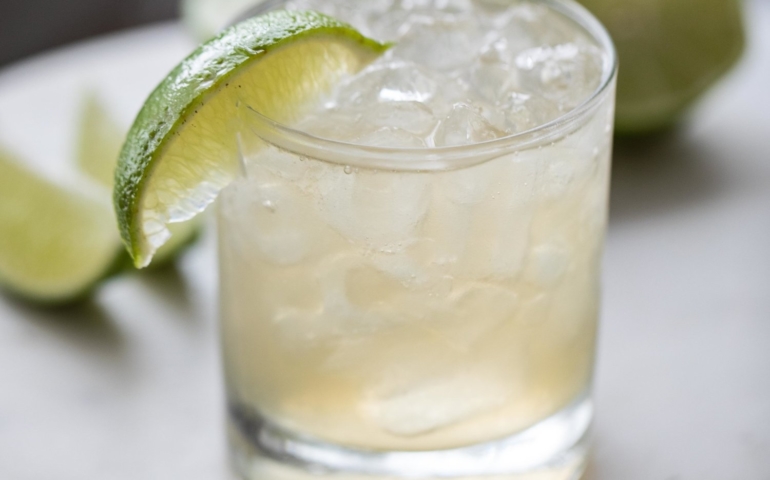 It’s National Margarita Day! After a heavy February full of rain and bone-chilling wind, the sun is shining in San Diego. As soon as I finish this post we’re headed to the local tortilleria for some fresh-made tortillas to go with our ripe California avocados and fresh Mexican salsa.

To the rest of you, still under a blanket of snow: pull the tequila out of the cabinet, slice open a fresh lime, and join us in spirit (pun intended).

Who Invented the Margarita?

What is a classic Margarita? Where did it come from? Well… that’s up for debate. As Dave Stolte observes in Home Bar Basics, “no singular cocktail has more people claiming its invention than the Margarita.”

The Margarita is essentially a tequila sidecar, with lime instead of lemon, and a glass rimmed with salt rather than sugar. With such a simple recipe, it’s entirely plausible that in the great age of cocktail experimentation, similar versions of the same recipe were simultaneously invented. It may have been born in Mexico, Texas, or California… or Great Britain. Here are two rather convincing origin stories:

London: in 1937, The Picador Cocktail (which has the same specs as a Margarita) was recorded in W.J. Tarling’s Cafe Royal Cocktail Book. Some speculate that the recipe was later copied and named “Margarita” by the Americans.

Mexico: David Wondrich explores the evolution of the Daisy in Imbibe, noting that soon after the repeal of prohibition, folks who traveled to Mexico came back speaking about a “Tequila Daisy”:

Unfortunately, nobody bothers to record what kind of Daisy they’re drinking, the old-school one, which was often served in Cocktail glasses with only a minimal amount of fizz, or the new-school one, like Agua Caliente’s Sunrise. This is important because of the Spanish word for “daisy.” If they were drinking them old-school, you see, they were drinking tequila, orange liqueur, lime juice… maybe a little splash of soda—and ordering the as Margaritas.

Regardless of its origin, I think it’s safe to say that the Margarita has become an enduring classic. It’s enjoyed around the world in many variations, though we prefer those recipes that are closest to the original, and least resemble something that comes out of a blender…

How to Make a Classic Margarita Cocktail:

Mixes: First off, (I just have to say it!) skip the margarita mix. And don’t reach for bottled sour mix unless you’re a nerdy bartender squeezing fresh limes for the day’s house-made sour. Get some real limes, cut them open, and squeeze out the juice. If you’ve never used fresh limes in your margaritas, this one simple change will open up an entirely new portal of sensory delight.

Tequilas: The second thing that’s worth noting is to be sure to use a tequila that is 100% agave. Many budget or bottom-shelf tequilas are not much more than flavored vodka. In a cocktail where the spirit shines so brightly in the spotlight, do yourself a favor and buy the real thing. Blanco, or silver tequila is the most basic kind of tequila, and the least expensive. Reposado (literally translates as “restful”) has been aged for at least two months, but up to a year. Añejo tequila has been aged for a year or more. Blanco tequila is ideal for mixed drinks, while reposado and añejo tequilas would be better for sipping… and also make incredible margaritas, lending depth to this very tequila-forward drink.

Shake well with ice to blend and chill. Strain into a chilled cocktail glass or serve over ice in an old fashioned glass. Garnish with a lime wheel. If you’d like to rim the glass with salt, we recommend salt on only half the rim – enjoy sipping from the naked side, and switching to salt to enjoy the two experiences.

There are quite a few delicious variations on the original Margarita recipe:

For those of you who like things a little sweeter, this recipe from Home Bar Basics adds a little sugar and reduces the lime:

Don’t have Cointreau? No problem. This recipe omits the triple-sec and simplifies both shopping and preparation. It’s just a Tequila Sour, following the classic 2:1:1: sour cocktail template. Many prefer this minimalist margarita, claiming the triple-sec hides some of the character of a really fun tequila. For a less-sweet version, cut the simple syrup down to 1/2 oz or to taste.

Like the minimalist Margarita, Tommy leaves out the triple-sec, but replaces sugar with agave nectar. This recipe was created by Julio Bermejo in the early 90’s for the cocktail menu at Tommy’s Mexican Restaurant in San Francisco. You can still go there and order it today!