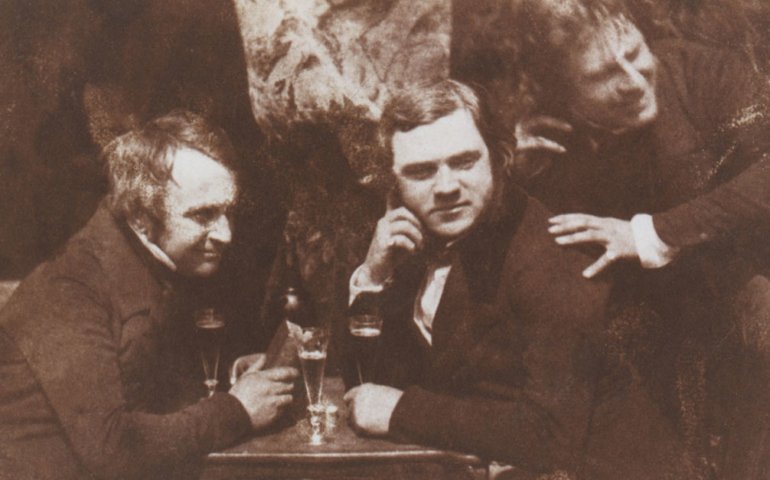 There are more than 58 million Instagrams tagged #beer to date. Reddit’s r/beerporn, a community dedicated to sharing envy-inducing beer snaps, currently has more than 74,000 subscribers.

These platforms are relatively new, but the phenomenon — drinking something awesome, wanting to capture its image — is not. Drinkers were immortalizing their boss pours long before smartphones or social networks existed. In fact, the practice is almost as old as photography itself.

The first known photo of people enjoying a beer is believed to have been taken in Scotland in 1844, just 18 years after Joseph Nicéphore Niépce took the world’s first photograph. Scottish photographers Robert Adamson and David Octavius Hill captured and produced the image.

The photo shows three figures enjoying a beer in an Edinburgh pub. Hill is the happy-looking man seen leaning on the right. James Ballantine, a writer, stained-glass artist, and son of an Edinburgh brewer, is the grinning figure on the left. A man named Dr. George Bell sits between the pair, gazing thoughtfully into the lens.

What are they drinking? According to a caption accompanying a copy of the photo in Edinburgh’s National Portrait Gallery, the trio sipped three glasses of Edinburgh ale, “a potent fluid, which almost glued the lips of the drinker together.”

As for the #properglassware, those are “ale flutes.” Popularized in the mid-18th century, these vessels were favored over tankards and mugs because the clear glass displayed the high quality of its contents. They’re noticeably smaller than the glasses we currently serve beer in, due to the potency of Edinburgh ale.

The photo seems to catch the drinkers casually enjoying the moment. It’s a stark departure from the rigid poses common to early photography. Given the extended exposure times necessary for early photography, however, chances are the seemingly candid moment was staged. Some things never change.