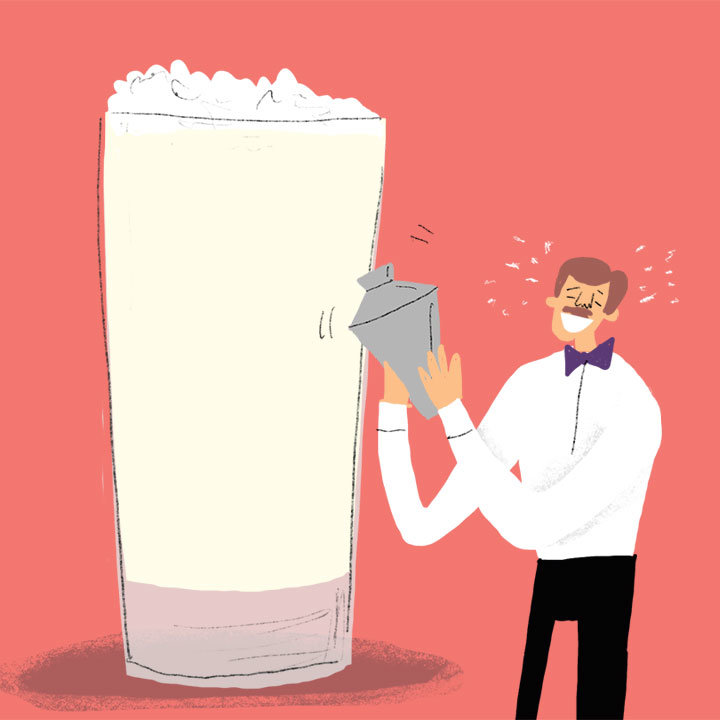 The Ramos Gin Fizz has many lovely distinguishable attributes: its frothy cap, its brunchy day-drinking designation, its traceability to New Orleans and one Henry Charles “Carl” Ramos at the late-19th-century civilized sipping station, the Imperial Cabinet Saloon. But it’s a drink that takes effort, and perhaps its most bemoaned, celebrated and talked about trait is the shake-shake-shaking.

As the story goes, Carl Ramos hired young men by the dozens to shake and shake only, most especially during festivals and high-tourist days, because the drink had to be agitated to the nth degree for 12 to 15 minutes. Twelve to 15 minutes?! I can barely stay on a treadmill or hold a thought in my head for that long. Fifteen minutes of shaking would require some kind of superhuman countenance (or, perhaps, a threatening labor policy—maybe Ramos wasn’t such a nice guy after all).

So how long should you shake a Ramos? “This is always a fun one to answer,” says NOLA barman Chris Hannah, whose time at French 75 brought in a James Beard Award and who now co-owns Jewel of the South and Manolito. “Honestly, between 25 and 45 seconds; and you can do this each way—new school and old, in that amount of time.”

What does he mean by new and old school? For the latter, he says, dry-shake (that is, without ice) everything—gin (London dry will do just fine, but if you’re a stickler for historical accuracy and often enjoy being that argumentative punk at parties, get yourself some Old Tom, as Ramos used himself), lemon juice, sweetening component, egg white, cream and soda water—for about 10 seconds, then another 15 with ice for proper chilling and dilution. To go new school, Hannah recommends shaking it all with ice for 15 to 20 seconds. So for both, “you still have the show of 15 to 20 seconds more that the guests like to see,” he says laughing. Extra shaking equals showmanship, an ingredient never to be discounted.

“Everybody else says it takes 10, 12, 15 minutes to make—not true,” says Paul Gustings, one of New Orleans’ stalwart bartending legends. “I make mine totally different. Everyone else dry-shakes; I don’t. Everybody else complains; I don’t.” Gustings made the very first Ramos Gin Fizz I ever had, on a Sunday morning when he was still behind the marble bar at Broussard’s. It was a frothy circle of pale sunshine, delicate and refreshing, and served in a petite glass. I can still taste and feel its cool, citrusy, creamy texture on my tongue.

Which is the other thing about the Ramos that’s just all wrong in some bars these days: It’s not a trough kind of brunch drink. Fill your generous pint glass with Bloody Marys or Backsliding Presbyterians, if you will, but the Ramos is not meant to be supersized. “Go to eBay and look for an old Ramos Gin Fizz glass,” says Chris McMillian, perhaps New Orleans’ most famous current Ramos maker. “If you’re lucky, you’ll find the vessel it was served in at The Roosevelt hotel, which was basically a six-ounce juice glass. The drink cannot taste as designed if not served in that glass, because the relationship of the ingredients to each other changes completely.”

Drinks author and historian Philip Greene sent me a recipe from a 1940 book with a mouthful of a name, “A Book of Famous, Old New Orleans Recipes Used in the South for More Than 200 Years.” It calls for a jigger of gin, scant teaspoons of other liquid ingredients and an ounce of seltzer. That’s not a big drink, people.

“The drink wasn’t such a large drink when it began, says Hannah. “Initially, it was served in what we consider a shot glass today: one ounce of gin, a quarter-ounce of sugar and lemon, part of the egg white, a half-ounce of cream, a couple of drops of orange flower water and a splash of club soda. Shake the first six ingredients in a cocktail shaker, splash some charged water and serve,” says Hannah. “Businessmen were said to have stepped up for one, shot it back and gone into their offices. It’s hard to imagine a shot like that before or after dinner, thus it was always an early-in-the-day drink.”

Part and parcel to the misguided largesse that the drink sports in some bars is an inordinate amount of froth. The froth, indeed, is a very important aspect of the cocktail, but that lovely capping layer isn’t supposed to approach the spectacle of a lemon meringue pie. “The drink is now judged on how high of a meringue there is, but that’s a parlor trick,” says McMillian.

According to Gustings, that’s one of the reasons he prefers to shake all the ingredients, including the soda water, together: It forms a froth with staying power. “If you add the soda water after it’s shaken, it goes to the bottom of the glass and pushes [the froth] up,” he says. “But then the drink separates really quickly, and that’s nasty.”

Some recipes call for simple syrup, and others employ confectioners sugar, which contains corn starch. While the latter is in minute proportions to the actual sugar, some bartenders find its binding properties helpful in maintaining the froth and keeping the drink from separating. Using syrup, of course, is a perfectly fine method, but it also adds a little more volume to the drink, which you may or may not be seeking in the final product.

“It’s a subtle drink. And everyone who has added stuff to it is trying to get it to punch above its weight, and that’s misguided to me,” says drinks historian Dave Wondrich. “It’s supposed to be a cloud you lay back on, sit back and float a while. It’s not some mano-a-mano experience. Make something different if you want to do that.”

The final, and perhaps most important, bit of cocktail dimension to this storied subtlety is the addition of a few drops of orange flower water. But this little piece can be the trickiest of all, because unlike other once-difficult-to-procure ingredients that flourished under the current cocktail revolution, a decent version or orange flower water has not been commercially resurrected with the same enthusiasm as, say, bitters.

The one product that was beloved and employed with great enthusiasm was A. Monteux orange flower water, but unfortunately the company went out of business in the 1990s. I have half a bottle, which I found on a shelf at a salumeria in Staten Island. Jeffrey Morgenthaler of Clyde Common in Portland, Ore., wrote about his own personal search for the stuff on his blog. He did indeed find a decent facsimile. Perhaps some enterprising young gun will read this and create another orange flower water outlet. One can only hope.

So, yes, the Ramos Gin Fizz is a little bit of a tricky drink to make, and maybe some bartenders do grumble about making them. Unlike a seasonal behemoth like the Tom & Jerry, the Ramos knows no blackout dates; its appearance merely favors daylight over night.

“For me, making the Ramos was a journey to learn how to do my job,” says McMillian. “Why do people come to bars? What do they expect? It doesn’t matter how nice a place it is. Everything we do is intended to create an emotional response, and that is pleasure, happiness and satisfaction.

“It means you have to put yourself into what you do,” says McMillian. “We’re privileged in the bar industry that people spend the most important moments of their lives with us—first dates, proposals, memorial services, birthdays. In New Orleans, there are 3,000 liquor licenses, and you can walk into 1,499 bars other than mine. So why walk into it? For me, it’s one simple thing: My guiding principle is that we care.”