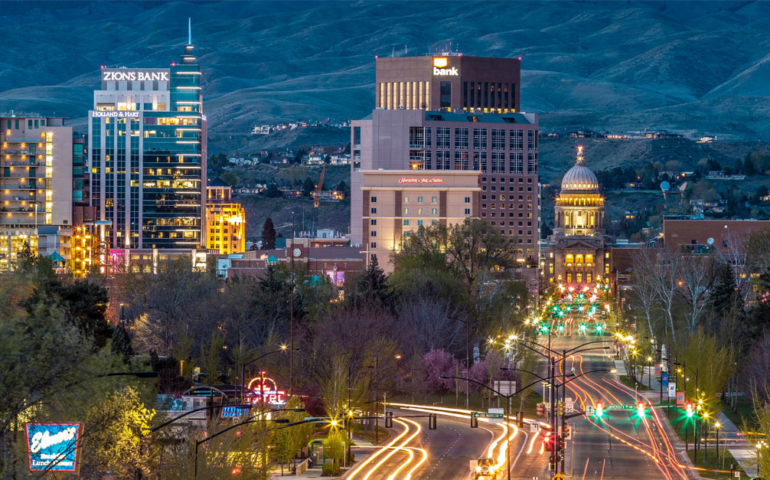 For many Americans, Idaho is synonymous with potatoes, but Boise is fast becoming a beer destination. Idaho had the third- highest employment growth in breweries between 2006 and 2016, after all, and the state is the second-largest producer of hops and No. 1 barley grower in the United States.

“Everyone in the craft beverage industry in Boise is super close, and there is a strong comradery and collaboration here,” Molly Leadbetter, co-owner of Meriwether Cider Co., says.

The city is incredibly supportive of beer and cider makers, Leadbetter says, and locals frequently share resources and expertise. Boise’s Barbarian Brewing, for example, uses hop hash from Mill 95, a nearby processing facility, to create a beer using a byproduct that typically goes to waste.

Granted, Boise does not have as many nationally known breweries as Denver or San Diego. What it does have, however, is accessibility. There are several great breweries located walking or biking distance from each other along the city’s Greenbelt, a massive trail that stretches some 30 miles along the Boise River. Downtown Boise is home to Woodland Empire Ale Craft, White Dog Brewing, 10 Barrel Brewing, Cloud 9 Brewery, Barbarian Brewing, Payette Brewing, Boise Brewing, and Clairvoyant Brewing.

Beer bars and bottle shops are plentiful, too. Bittercreek Alehouse pairs more than 40 beers on tap and 100-plus bottles with pub grub. PreFunk Beer Bar has 18 beers on tap, and at BRU, guests can sample self-pour taps of 30 different brews. The Handlebar is a bicycle-themed beer and wine bar, and Hop & Bottles sells hard-to-find beers. At Bier:Thirty, grab a fresh beer from the 10 on tap and browse through more than 400 bottles for something later.

Sheila Francis, Executive Director of Idaho Brewers United, has seen the number of breweries double since the organization formed in 2012. The group has three goals to enhance Idaho’s brewing community: education for brewers to learn their craft and the business of brewing, promotion of local breweries, and legislation. Recent legislative wins include better definition of contract brewing to make it easier to regulate, allowance for sampling in grocery stores, and allowance for minors in tap rooms.

Francis says the beer scenes in Boise and in Idaho are booming. “We have something for everyone,” she says.

Seven more breweries are currently in the works to open in Boise and the surrounding area. Spring Creek will launch in Avimor, just outside Boise, in September 2019 in a new community development on an underserved stretch between Boise and McCall.

A series of festivals has sprouted up to speak to the budding beer community here. Alefort is part of Boise’s Treefort, an energetic, creative multi-day festival spanning the city, highlighting music artists from around the country. The three-day event takes place in March and celebrates all things beer and cider.

“We think outside the traditional beer fest and focus on experience,” says Alefort organizer David Roberts. This is done in many ways, such as a nail pull area, where fest goers can get their pour right from the barrel. There’s also a live canning demonstration and breweries fermenting beers with different yeast strains so people can taste the difference.

Other beer fests in Boise include The Bash Music and Craft Beer Festival and the Beer+Friends Fest, which invites the industry’s cider-making friends, too. Destination:Beer, a festival taking place in February north of Boise, encourages breweries to bring their “big” beers — barleywines, barrel-aged, and imperial stouts.

“Boise is rapidly growing, and the beer scene is reflecting that, and it is thriving,” Francis says.

The article The Craft Beer Scene in Boise, Idaho Is Getting Bigger by the Day appeared first on VinePair.