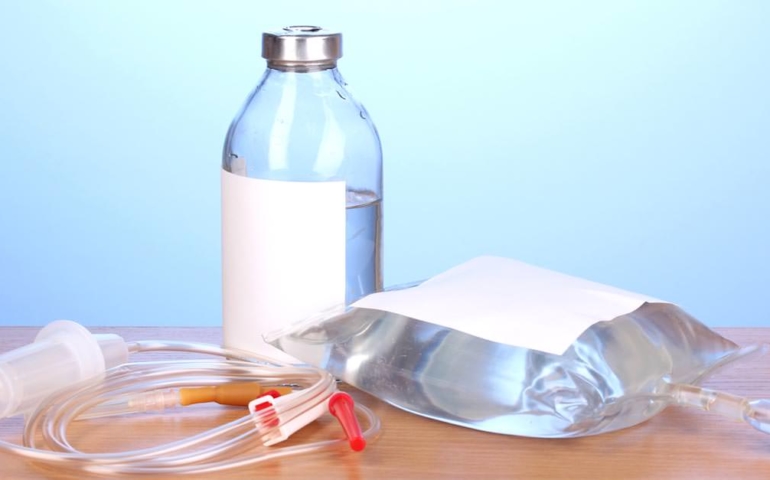 A newly 25-year-old New Yorker walks into an East Village clinic on a bitter Saturday morning in February. “I’m sorry, I know this sounds gross, but I just keep throwing up bile,” she tells the nurse. “I’m so hung over.”

As a birthday gift, the quarter-centurion’s friends paid for her treatment at the I.V. Doc, a hydration clinic in Manhattan’s East Village. The on-demand service, described as the “Uber” of hangover cures, offers hangover relief via needle filled with 1 liter of saline solution or electrolyte replacement fluids, and a carefully concocted prescription of nausea, heartburn, or anti-inflammatory medication.

“What could be a better way to bring in 25 than with an I.V.?” the patient says.

With names like “Cleanse,” “Detox,” “Refresh,” and “Revive,” the I.V. Doc’s services sound very similar to those offered at a spa. But these detoxifying treatments are specifically designed for those suffering from hangovers.

“To stick a needle in your arm and pump yourself with fluid seems outrageous, but, honest to God, it works,” Dr. Adam Nadelson, founder of the I.V. Doc, says. “There’s a reason why your doctors, nursing, and EMS friends all swear by this.”

Thanks to Nadelson’s I.V. Doc, and other businesses such as The Hangover Club and Miami-based Revivme, I.V. hydration is now widely available throughout the country and around the world. In Las Vegas, a 45-foot tour bus called Hangover Heaven drives the strip, ridding Sin City of the morning after, one drinker at a time. No matter where you are, you too can recover from hangovers the way medical professionals do — well, as long as you’ve got the cash.

Walk-in treatments at the I.V. Doc’s clinic in the East Village start at $199 for the Cleanse and $269 for the Revive. Prices climb higher when the I.V. Doc comes to administer treatment in the comfort and privacy of your home, hotel room, or, erm… office.

“I treated a guy who owns his own business down in FiDi,” Jess Gallucci, an I.V. Doc nurse who makes regular client visits, tells VinePair. “He’s at work, on the phone, he’s getting an I.V., and he looks at me and says, ‘I’ve got to make dinner with a client tonight.’”

Prior to ringing in the 2015 New Year, Neil Patrick Harris organized I.V. drips for his friends at a “hangover party” the following day. The ultra-premium equivalent of pre-stocking the fridge with Pedialyte, NPH’s outing got a lot of media coverage, marking the moment I.V. drips left the bloodstream and hit the mainstream.

Attended a New Years Day Hangover party today. Everyone wore PJs, and I brought @TheIVDoctor, who rehydrated us all. Highly recommended.

“We get some VIP famous people,” Gallucci says, as well as a surprising number of college students. “You’ll walk in to see six guys on a couch waiting for their drip, but you know they’re not paying for it because the name on the credit card doesn’t match their medical records.”

“On my last birthday, I had a big party planned on Saturday, but ended up also going out on Friday and partying until 4 a.m,” he says. “I woke up after a couple hours of sleep, and thought, ‘Shit, it’s my party tonight, I have a bunch of guests I haven’t seen in a long time, I have relatives coming, and I really need to do something to get back in decent shape.’”

One liter of fluid and a couple hundred dollars later, Leibowitz felt “instantly back to life,” just as he has the half-dozen or so other times he’s used the service.

Arranging at-home treatment is as simple as a phone call or visit to the company website, followed by a brief teleconsultation with a physician. The I.V. Doc guarantees a nurse will be by your side within a few hours (and it’s usually much faster).

On one occasion, a nurse was finishing an appointment in Manhattan at the very moment a request came in from the apartment next door. “I actually took a screenshot of that neighbor asking, ‘Are you sure that a person’s going to be here in 30 seconds? I don’t think that’s possible,’” Nadelson says. “Then, knock, knock, knock….”

After launching in New York City in 2014, the I.V. Doc quickly established itself in the Hamptons, Chicago, and L.A., all destinations where money and partying often coexist. Nowadays, the business treats patients in 25 cities nationwide, from NYC to Des Moines, Iowa, to Fort Lauderdale, Fla. Meanwhile, London and Ibiza are the first international locations in the I.V. Doc’s expanding empire.

Of course, some people will always be skeptical about voluntarily sticking a needle in your arm.

“Don’t worry, dad, it’s perfectly normal,” the woman in the East Village clinic tells her concerned parent over the phone. “There’s another guy here, and he does this all the time.”

I’m the person she’s referring to, though she’s mistaken in thinking this is how I normally tackle a hangover. (My usual treatment involves self-administered Pedialyte and Netflix.) What I had actually told her was that she needn’t worry because the I.V. drip really does work. I said it confidently because, earlier that same Saturday, I’d tried it for the first time, too.

That morning I had arrived at the clinic, 25 minutes late for my 10:30 appointment, with a pounding head and a 15 percent cell phone battery. Less than an hour later, I felt hydrated and energized, and the pitcher using the inside of my head for batting practice had (mercifully) called it a day.

There was one thing bothering me, though. One of the worst aspects of any hangover, I find, is the “hangxiety” that follows a night’s drinking.

“When am I going to stop me feeling like my family and everyone I love hates me?” I ask the nurse. Sadly, she says, we’re still searching for a cure for that one.