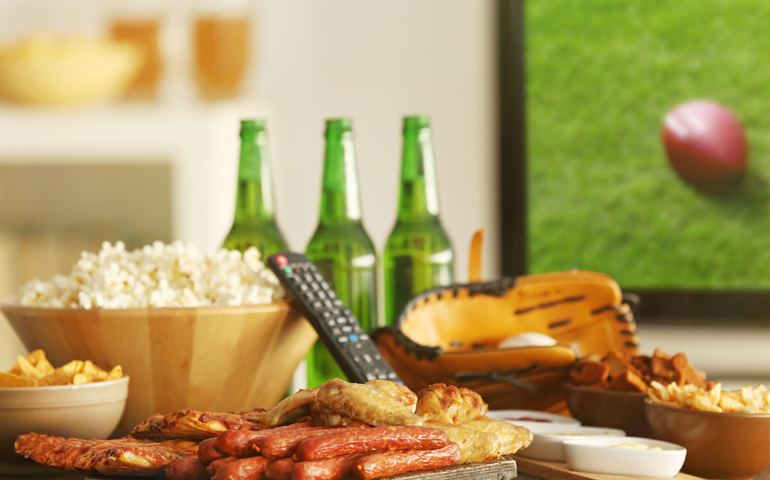 Super Bowl LIII came and went, but the most interesting part, the advertisements, are here to stay. Particularly interesting are the ads from alcohol brands, which aired nationally or in various local markets to promote some of the world’s biggest booze campaigns.

From corn syrup shade, to sad robots, to a 1901 athletic champion racing out of obscurity, here are the best and worst Super Bowl LIII ads, ranked.

This ad shows a dreamy succession of life’s happy, relatable” moments — beautiful people on a blind date, a bikini-clad woman swinging from a rope into a tropical ocean, a couple finding their wine glasses while unpacking after a move (ok, this one got us) — but it wasn’t much more than a stock video-esque montage of moments that sadly, do not inspire us to drink Yellow Tail wine.

Prohibition? Yeah, we’ve heard of it. We appreciate Beam Suntory following Yellow Tail’s savvy move of using local ad buys (in this case, in the nation’s top three media markets) to launch its first new global ad campaign since 2014, but a 1920s “our family rebuilt bourbon” story is one we’ve heard before. Sorry, Jim Beam.

We told you hard seltzer is coming for your beer. While we appreciate Anheuser-Busch excellently targeting its market here — women who are more mature than millennials, still beautiful and fun, and probably watch Shark Tank — the mermaid thing was a little weird. That said, spiked seltzer will slay at the country club this summer.

Stella Artois: Change Up the Usual

This 45-second spot could have been better at 30. We’ll give them the star power — for many viewers, The Dude and SJP are sights for sore, late 1990s-nostalgic eyes — and the classic cocktail idea is fun. But the awkward exchange at the end is hard to watch. It might be worth mentioning the Cosmopolitan and White Russian are among the world’s top 50 cocktails — for a reason. They’re better than Stella.

What’s with all the anti-robot propaganda this year? This sad ad posits staying fit is only worth it if you can enjoy the benefits. Are we that scared of technology? Robots may not have feelings yet, but we hope we can drink with them someday.

Then, there’s “The Pure Experience.” This ad is part smart, part sexist. It’s a technical achievement — the cinematography and sound editing are beautiful, as is Zoe Kravitz, who makes a very strong case for trying Michelob Ultra Pure Gold with her alluring ASMR. But we’re still using a woman’s sexuality to sell beer, just in a more subtle way. It’s an old trope in a tech-savvy package.

Budweiser’s new 100-percent-wind-powered messaging is positive, and the company’s efforts admirable. Plus, it’s hard not to love the Americana trifecta of a Dalmatian, the Clydesdales, and amber waves of grain, all while Bob Dylan croons “Blowing in the Wind.” But the ad has also been criticized for being less emotionally gripping than other Bud commercials, and we can’t argue that.

As this author admitted on Twitter last night, Anheuser-Busch’s Bud Light “Special Delivery” ad was more smart than silly. Educating consumers about the ingredients in their beer is a savvy move, and it was bold to call out Coors Light and Miller Lite for using the less-than-ideal adjunct of corn syrup in their beers. (Worth noting: Miller Lite clapped back on Twitter with a funny tweet, thanking Bud Light for giving Miller Lite its first Super Bowl air time in 20 years, and pointing out that while Miller Lite may use corn syrup, it also has more flavor and fewer carbs).

Joust, a hybrid ad that begins as another Dilly, Dilly commercial, then segues into a teaser for HBO’s “Game of Thrones,” was also clever.

If you weren’t paying attention, this ad might have whizzed right by you. In it, Hennessy celebrates Marshall “Major” Taylor, a seven-world-record-setting American track cyclist who was “the world’s most famous athlete” at the turn of the 20th century. Hennessy says Major Taylor embodies its mantra, “Never Stop. Never Settle.” The ad, voiced by the rapper and hip-hop artist Nas, shows Taylor, the only African American cyclist in his era, speeding past white competitors (on a very impressive period-era track). It’s the only ad that speaks to Black History Month.