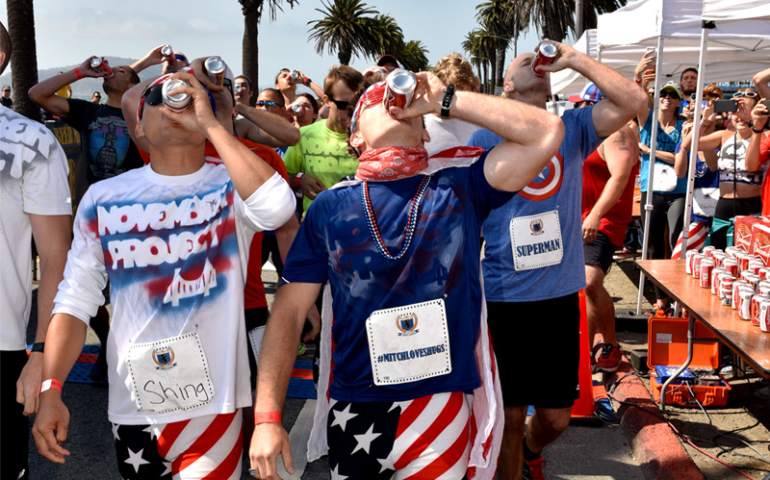 It’s a bright, blue morning and I’m in the bleachers, trying to look casual while I lace up my running shoes and cover the twelve-pack with a spare shirt.

Polite children, tween lacrosse players, and geriatric Sunday walkers dot the field. I stretch, taking it all in, and wonder if I will vomit on any of them.

The Beer Mile is exactly what it sounds like: a “gastro-athletic” competition that challenges those brave—or foolish—enough to drink a beer every quarter mile of a one-mile foot race. Four beers, one mile.

The rules are simple: Beers must be 5% ABV or higher. No wide mouths, no shotgunning. If you vomit, you run an extra lap. In possession of the what, but still confused by the why and how I reached out to the current world record holder for insight and advice.

And that is how I ended up in running shorts on a high school campus, with a rack of warm beer and a rising queasiness in my gut.

On a windy Thursday in 1954, Roger Bannister ran a (presumably beerless) mile in under four minutes, shattering a widely believed ceiling of human physiology. According to accounts, cheers drowned out the announcer as soon as he began to read the official time.

Last year in Marin, California, weeks shy of the 60th anniversary of Banister’s run, James Nielsen cracked open the first of four Budweisers, drained it in four seconds, and sprinted through another barrier: the five-minute beer mile. As Nielsen’s wife clocked his 4:57 finish, the empty college track was silent except for her giggly excitement and Nielsen’s heavy breathing. A year of training had paid off. It’s a strangely beautiful and intimate moment for a world record, especially in light of what was about to come.

Nielsen uploaded the video the next morning and threw it on Facebook, thinking maybe a couple of hundred people would watch it. Then he left for work.

The video has nearly a million-and-a-half hits on YouTube and has garnered Nielsen coverage everywhere from The Wall Street Journal to Runner’s World.

The Beer Mile’s roots go back to at least the 1980s as an end-of-season steam release for collegiate runners. In the beginning, rules were decided on the fly, records were anecdotal and regulations varied wildly.

So how did a vanguard of half-drunk, occasionally underage runners create a phenomenon? Patrick Butler of Beermile.com, the de facto authority on the race, credits the internet and social sharing. Once online, rules and times could be recorded, and perhaps more important, shared. Today, his site hosts over 90,000 entries and has seen traffic double each of the last three years. What’s next? Butler anticipates mainstream popularity for the Beer Mile, and maybe even Olympic recognition. It might just be a matter of rebranding: what we know as the Winter Olympics Biathlon was originally just Nordic military patrol training and, he says, “shotgunning a beer [is not] any more ridiculous than running than shooting a shotgun—although maybe they’re equally dangerous.”

The Moment of Truth

Meeting the disapproving glares of parents with cheerful “Good mornings!” and a disarming wave, I set my Budweisers on the side of the track, and recalled the champion’s three central pieces of advice:

Warm Beer is Your Friend

The warmer the beer, the more CO2 you release when cracking the tab. The more you release, the less you consume, which brings us to…

The booze in beer isn’t what gets you—it’s the 48 ounces of foam sloshing around in your gut. Burp out as much as you can in the first 10 seconds after each beer.

Start the can at a 45-degree angle to help with air displacement, before proceeding to full tilt. Oh, and practice chugging while winded.

The first beer goes down easy and I’m off. I know I’m no record breaker, but I start to think I’ve got a shot at this thing. The second beer is slower but manageable. The third beer is the tipping point.

I begin to get nausea. I begin to feel the fear. My pace slows to a crawl as I frantically scan the field for a place to puke. None reveals itself, and there is no choice but to continue. The fourth beer and lap take place in hellish slow motion, but some primordial instinct pushes me on. If the police haven’t already been called, regurgitating four beers on to a soccer practice will fix that.

I make it. And I don’t vomit. Even though my time is more than double what James Nielsen threw down, I still feel a sense of pride. I set no records, completing a relatively obscure competition with only the bare minimum of competency, but I did it. Back in the bleachers, I eat a sandwich and look at cell phone footage of my pained chugging, and think about how I will never, ever do the Beer Mile again.