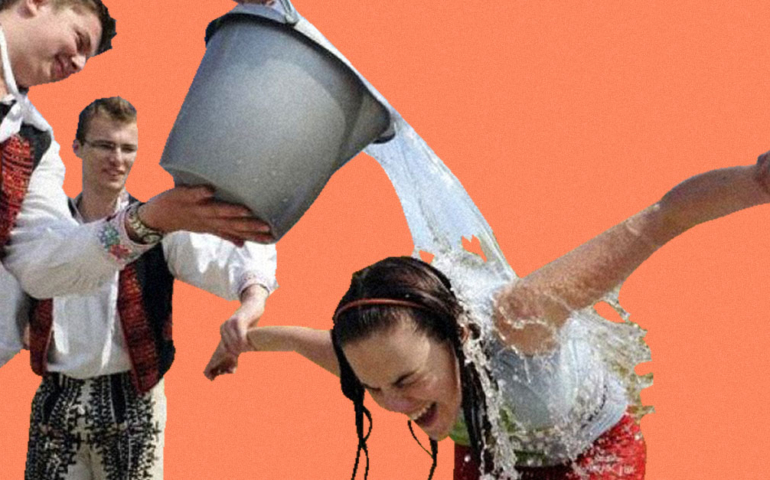 In Slovakia and other parts of Eastern Europe, including Hungary, Poland, and the Czech Republic, Easter means vodka. Specifically, a longstanding Easter tradition combines the second coming of Christ with traditional folk costumes and a ritual involving dousing women with ice water and giving men shots of vodka.

The festivities occur on Easter Monday, the day after Easter, or Veľká noc, which translates to “big night” (signifying Christ’s resurrection) in Slovak. In keeping with Slovakian folk tradition, men and boys douse women and girls with ice water, supposedly to preserve or invigorate their health (the science gets spotty here). In return, the girls reward the guys with dyed eggs and a shot of booze.

The daylong fete is meant to signify the coming of spring — and, more specifically, young women’s fertility and beauty — but what may have begun as a courtship ritual is mostly celebrated among families and neighbors today, and acknowledged among Slovakian women as bizarrely one-sided.

“The tradition goes that young guys shall visit every house in the village where they have single girls … sprinkle them with water and spank them with whips made of willow branches,” Maria Kecsoova writes in Welcome to Bratislava. The water-throwing ritual is called oblievačka, and the spanking is called šibačka. “Please note that ‘sprinkle’ is a mild word here,” Kecsoova writes. “Sometimes the guys come with water buckets.”

The severity of oblievačka ranges based on location and, to a certain extent, generation. In larger cities, buckets of ice water have evolved to kinder tools, such as water guns and spray bottles.

In her youth, Jana Kasperkevic would wake up “drenched in ice cold water as my brothers stood over me grinning,” she wrote in The Guardian in 2015. “To say that I hated Easter Monday as a child would be an understatement.” Her mother grew up in a small village. “As a girl, she was often dragged into the yard and doused with buckets of water or dumped into a full bathtub of water.”

Maria Kecsoova writes that some women today opt to leave town during the holiday to avoid the so-called festivities. “Who would blame them, right?”

The article The Ancient Easter Ritual That Starts With Ice Water and Ends With Vodka appeared first on VinePair.