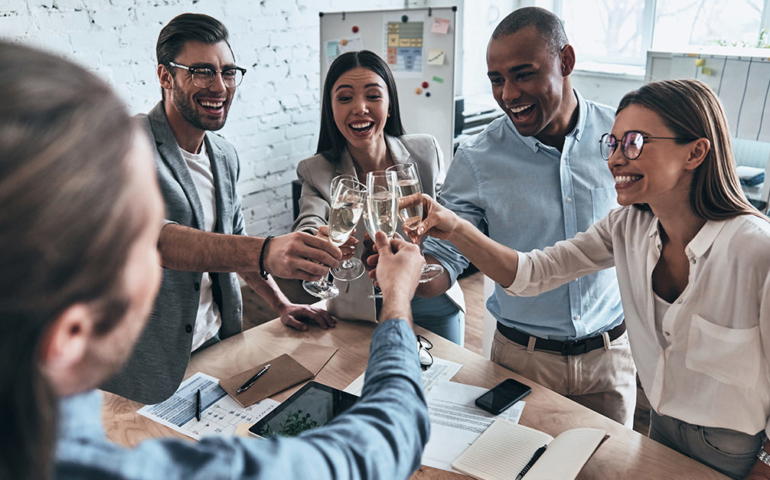 A study examining drinking in the workplace determined the top five industries where alcohol is consumed the most. They are:

Beer was reported to be the most acceptable alcohol to drink with coworkers, followed by wine, Champagne (that’s also wine, comrades), whiskey, and vodka. Shots were deemed the least acceptable, and the average number of acceptable drinks to have with a coworker was two.

Nearly 50 percent of respondents across industries agreed that drinking with their boss or coworkers will improve their relationship; and 24 percent said drinking alcohol was part of team bonding events.

Although not included in the list, “workers in the legal field were most likely to report boozy holiday parties,” and “lawyers often view firm events as a chance to blow off steam relating to the stress of their profession,” the report said. We feel for you, lawyers.

Silicon Valley tech companies are infamous for lax alcohol policies. Twitter and Glassdoor, for example, offer free beer all day, and GitHub and Yelp have beer on tap, the Ladders reports.

All in all, the study shows alcohol is largely present at holiday parties and other events — not expected or encouraged during the day-to-day grind. Plenty of respondents (35 percent) said they preferred not to drink alcohol and work events. However, respondents who overindulged admitted to the consequences, spanning spilling secrets (14.2 percent) to sexually harassing a coworker (2.2 percent).