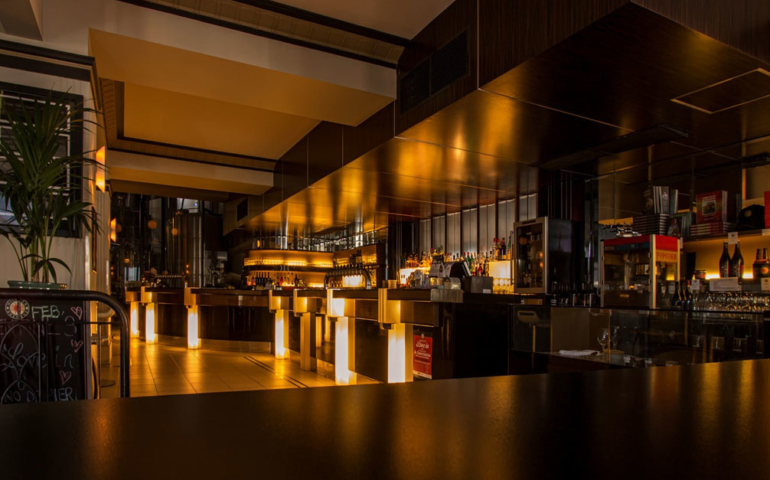 Remember when gift cards were going to save America’s bar and restaurant industry?

The solution was first touted by major news outlets during the third week of March, after state governments mandated that bars and restaurants close their on-premise operations. It came during a period of extreme and rapid change, a pre-face-mask Covid America when most people were still unaware of, or perhaps unwilling to accept, the enormity of what lay in front of us.

Of course, those promoting, purchasing, or selling gift cards should be praised and not faulted. Every dollar given helps toward ongoing costs like rent and insurance. But as days have turned into weeks, it has become clear that no amount of gift cards will offset the financial losses bars and restaurants endure while sitting closed and empty.

Subsequent lifelines, including the much-maligned Paycheck Protection Program (PPP), proved equally fruitless for many operators. Now, in the absence of a vaccine and without clear guidance from the government on what the coming months hold, bar and restaurant owners are left wondering when they can reopen and how they will return to profitable business.

To learn how bars and restaurants are thinking about the future of their businesses — and the hospitality industry as a whole — VinePair connected with industry leaders around the country.

One thing we heard repeatedly is that significant changes are needed to make the industry more sustainable. From government-subsidized financial aid to overdue updates to old legislation, industry professionals are calling on the government to step up. Restaurants and bars closed their doors to on-premise customers to help curb the spread of Covid-19. Without help, the reward for that compliance looks like a large portion of independent operators going out of business across the country. The industry must find its collective voice, and hold elected officials accountable. Now, more than ever, it’s time to bring politics to the table.

The Shortfalls of PPP

With The Dead Rabbit set to receive PPP funds, the Manhattan bar’s co-owner Jack McGarry is running the numbers — and they don’t add up. While many bars are using the funds to reopen and pay employees (turning the loan into a grant), McGarry doesn’t believe that’s an option in the current landscape. “The stipulations that they have set are just naive,” he says.

Instead, McGarry plans to accept the funds as a low-interest, long-term loan and use them to reopen the bar when it’s safe to do so, which he thinks may realistically be in 2021. In the meantime, he’s focusing on merchandising — something the bar has already been ahead of most hospitality brands on — and developing a new business model that is watertight, so when the bar does reopen, it is better prepared for unforeseen events in the future. “I’m treating it like we’re opening a new business,” he says.

McGarry isn’t alone in the industry in highlighting the shortfalls of PPP. The largest, most vocal opponent to date has been the newly formed Independent Restaurant Coalition (IRC). Just over a month since its inception, the coalition boasts over 51,000 members, led by high-profile names such as José Andrés, Tom Colicchio, Nina Compton, Ivy Mix, Naomi Pomeroy, Andrew Zimmern, and many more.

The IRC is calling on Congress to provide a $120 billion stabilization fund to help “independent” restaurants, which it defines as those that aren’t publicly traded and those with fewer than 20 locations of the same name. During a recent video conference, TV personality and restaurateur Andrew Zimmern highlighted the contributions of these restaurants to the U.S. economy.

“That macroeconomy of independent restaurants is necessary for a full American economic recovery,” Zimmern says.

Skeptics might question why such an imbalance is only being raised now, at a time when almost every other industry in the country is asking for federal support. For Portland, Ore.-based Naomi Pomeroy, an IRC member who owns a restaurant (Beast) and cocktail bar (Expatriate), the answer is simple: “We tend to work 16 hours a day. We were so busy surviving, we forgot to ask for what we needed,” she says. “I think now we need to start asking.”

Sam Kass, a political advisor who served as President Obama’s senior policy advisor for nutrition policy, believes the IRC has a fighting chance. During the video conference, Kass explained that just as every other industry is pushing its agenda to politicians on the Hill, it’s time for the restaurant community to raise its collective voice. “Even though it’s a long shot, it’s still a real shot,” he says.

Others believe the government needs to be held more accountable for its handling of the Covid-19 pandemic.

Erick Castro, a bar owner with locations in San Diego and NYC, believes the issues facing independent bars have been exacerbated by the federal government. With better access to hand sanitizer, masks, testing, and ventilators; and if contact tracing was done on a larger scale, Castro believes businesses might have been able to reopen already.

“Our economy has been booming for the last five or six years from a Wall Street standpoint; we should have been building a cash reserve for a situation like this,” he says. Instead, “we have a leaky bucket and now we’re trying to fill it with water to put out a fire — that’s a lot more difficult than it had to be.”

Beyond government aid, Castro believes bars will look to cutting costs and adapting menus in the short and medium terms. For example, faced with fewer patrons in his bars, Castro is considering simplifying his cocktail menus to a shorter list of “greatest hits,” he says, focusing on simple, classic cocktails that have higher profit margins.

Los Angeles-based Matthew Kaner co-owns two wine bars (Augustine Wine Bar and Bar Covell) and a wine club. Kaner is wondering how his businesses can navigate near-certain capacity caps, which could range from 25 to 50 percent. He plans on converting his bars’ event spaces to extra seating — “no one’s having a party anytime soon” — and offering his wine inventory for retail online.

For the latter, he’s aided by a special liquor license that allows his bars to sell wine for off-premise consumption. During Covid-19, all bars within the state have been granted temporary permission to do likewise — as in many other states. But when stay-at-home orders are lifted, Kaner plans to lobby the California Department of Alcoholic Beverage Control (ABC) to ensure all businesses with on-premise licenses enjoy a similar privilege.

“If [the California ABC] doesn’t allow that to stay the norm moving forward, then no matter how much [on-premise] alcohol we’re allowed to sell, it’s not going to be enough,” he says.

While the calls for government intervention are loud and numerous, not everyone is waiting for or expecting help from the federal government. “The people here understand, ain’t nobody coming for them,” says New Orleans-based activist and beverage consultant Ashtin Berry. “[Hurricane] Katrina already proved that. No one’s coming to save us.”

Berry also believes there are more pressing issues at hand than a restaurant stabilization fund, such as impending food and housing insecurity. And while she respects some of the chefs who make up the IRC, she doesn’t feel the organization properly represents the independent restaurants across the country.

Berry says independent restaurant owners should do more in the future to ensure their employees are covered by health insurance. She points to creative solutions, like forming S corps with other small businesses in their communities. “[The IRC is] leaning into charity, not solidarity. There’s a huge difference,” she says.

Portland-based bartender and author Jim Meehan says he worries that the bar and restaurant industry’s lack of unity prior to Covid-19 leaves it too far down the pecking order to receive aid from Washington. He likens the situation to calling for “air support” that’s never going to arrive.

“One of the reasons we have so little power in Washington is because we’re not engaged with the political process the rest of the time,” Meehan says. “When you don’t vote or engage in politics, and then suddenly you need politicians to save your life, it’s not a huge surprise that they don’t come running to help you.”

Meehan believes there will never be a “tent big enough” to cover the full diversity of America’s bars and restaurants. Even if there were, it wouldn’t stand a political chance against the financial muscle of the airline industry or gun lobbying groups. Put simply, the National Restaurant Association will never equal the NRA.

When asked how bars and restaurants can instead hold elected officials accountable, he says they should vote. “There’s an election in November, with many more after, and we need to unite as many hospitality workers, including producers, distributors, and the patrons who support us, to vote as one big powerful block moving forward,” Meehan says. “We’ll never have the money to influence politics, but we have the numbers and the venues.”

Prior to Covid-19, there was no one-size-fits-all business model that worked for every bar and restaurant. The same will likely be true of the path to rebuilding. But while large-scale governmental aid may be necessary to get the industry back on its feet, one could question how that measure addresses the lack of profitability that plagued the industry prior to Covid-19.

The U.S. Bartenders’ Guild (USBG) was formed in 1948 with the aim of promoting the role of the bartender as a profession versus a transitional job. In 2014, some of its members formed the USBG National Charity Foundation (USBGNCF), an adjacent entity that aims to provide a safety net for bartenders. In times of crisis or tragedy, bartenders can apply for grants up to $2,500.

During a typical month, the foundation receives five to 10 applications and gives out around 12 to 25 grants per quarter, founding director Kim Haasarud explains. In the past weeks, USBGNCF has received close to 300,000 applications to review.

The need for a fund like the USBG’s raises a key question: Why aren’t hospitality jobs treated like most other professions, with health insurance and paid time off? The simple fact is that the entire business model of bars and restaurants needs to be reconsidered.

On a governmental level, legislative concessions must be made to allow independent bars and restaurants to thrive. Those businesses, in turn, should reinvest those profits in their workers, providing benefits and a living wage. And as consumers, we need to come to the realization that it costs more to eat out — and that we need to pay our fair share. We can also help the industry by making more informed decisions about who we vote for, and hold elected officials accountable when they fail the industry.

Without bars and restaurants, we lose a key thread in the fabric of our society. We lose the third place — a space that provides “happily anticipated gatherings of individuals beyond the realms of home and work,” as Ray Oldenburg describes in “The Great Good Place.”

Now, more than ever, as restaurants and bars reopen, we must recognize that every plate of food we eat and sip of alcohol we savor is inherently political. We are what we eat. We are what we drink.

The article Struggling to Survive, Bars and Restaurants Must Bring Politics to the Table appeared first on VinePair.