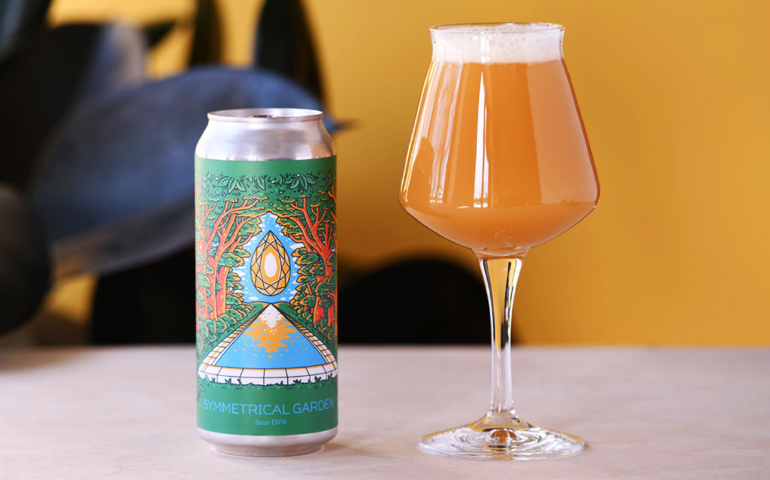 Somewhere between the surge of sour beers in the U.S. and the relentless hazy IPA craze, a handful of the nation’s trendiest brewers started releasing sour IPAs. The tart, hoppy brews are made with the softest malts, the trendiest hops, and the most luscious fruit purées.

Now the sour IPA style is becoming a nationwide cult favorite. In January 2019, Hudson Valley Brewery, a New York operation heralded for its sour IPAs, celebrated its second anniversary. That same month, Colorado’s Wiley Roots Brewing announced that it plans to expand its sour IPA program, due to popular demand.

For breweries devoted to the style, sour IPAs represent more than just another IPA trend. It’s a whole new way of approaching beer.

Though not officially defined, sour IPAs are commonly understood as New England-style IPAs with added tartness. That flavor primarily comes from lactobacillus, a microorganism used in the kettle souring process. Additional flavors come from barrel aging, or from adjuncts like fruit, vanilla, and lactose.

Jason Synan, Hudson Valley Brewery co-founder and brewer, is a sour IPA innovator. He was inspired in part by the explosive popularity of New England IPAs (NEIPAs), which, he felt, had one obvious deficit.

“I didn’t understand why acidity isn’t used as a control point in this style,” he says of NEIPAs. “Juice is sugar and acid.” And so, he and co-owner and brewer Michael Renganeschi made plans. “We basically set out to introduce acid to New England IPA,” he says.

At the time, Synan was brewing at New Paltz’s Bacchus restaurant and brewery. As he set out to reconfigure NEIPAs, he found himself looking down the river to such iconic New York City cocktail bars as Death & Co., Nitecap, and Please Don’t Tell.

“For me, it really started out with a fascination for making cocktails,” he says. “Cocktails have an ability to be so exact, so precise, so scientific. How do 10 to 12 ingredients combine into a single, beautiful, mysterious elixir? That was the original inspiration.”

Like a mixed drink, he breaks down the process for making sour IPA into three primary components: residual sugar, acidity, and bitterness.

The sugars come from soft grains like wheat or oats, as well as milk sugar, also known as lactose, which “creates a supple, lush mouthfeel,” he says. Lactose, and sweetness in general, “acts as a perfect counterpoint to the profile of acidity. That vibrant, quenching high tone from the use of lactobacillus in preliminary fermentation accentuates the perceived juicy quality often used to describe New England IPA.” Hops, used at lower temperatures, provide a “botanical character” that completes the equation.

If sugar, acid, and bitterness create the base for a sour IPA, “the next step is elevation and embellishment,” such as oak aging, blending, and adding fruits and herbs, Synan says. “It’s mixed fermentation but under a controlled environment.”

Of course, there are multiple ways to make sour IPAs. “We define a sour IPA as a beer that has an acid component as well as a hop component,” Kyle Carbaugh, Wiley Roots Brewing CEO and head brewer, tells VinePair. However, “bitterness, for us, is rarely ever a relevant factor,” he says.

Wiley Roots’ Cobbler series “explore[s] the interplay between traditional pie adjuncts, juicy and citrus-forward hop varietals, and a soured hazy IPA base,” Carbaugh says. Adjunct additions are “heavy handed,” he says, but “no single component dominates the overall impression of the beer from start to finish.”

A mixologist might say the same. “For most of the sour IPAs we make, there are definite underpinnings of citrus-forward cocktails. Mai Tais, French 75s, and the Penicillin cocktails have all been recent imbibements that have steered our focus with regard to sour IPAs,” Carbaugh says.

One of Hudson Valley Brewery’s popular concoctions, Bloom, is described as a sour double IPA with raw wheat, malted oat, milk sugar, cherries, dark chocolate, and chamomile, hopped with Citra and Simcoe. “On paper, it sounds like a hype beer. It sounds ridiculous,” Synan admits. “But then you have the beer and you’re like, ‘Oh, sh*t, this is actually saying something.’ It’s not just a list of ridiculous ingredients.”

Although Hudson Valley is credited with developing the sour IPA style over the last two years, other tart, hoppy beers preceded it. In 2015, New Belgium Brewing of Fort Collins, Colo., released Hop Tart, an American sour pale ale the brewery described as a “sessionable, fruity spin on the typical American sour.” It was brewed with Belgian pale malt, lactobacillus, and Nelson Sauvin, Galaxy, and Experimental Hop 522.

Also in 2015, Almanac Beer Co. kicked off its Hoppy Sour Series of single-hopped sour ales such as Hoppy Sour: Citra, Hoppy Sour: Amarillo, Hoppy Sour: Equinox, and Hoppy Sour: Mosaic. “With one foot in the barrel-aged sour world, and the other in the land of IPAs, this style-breaking exploration of flavor is a blast of aroma followed by a complex funky oak finish,” Almanac wrote on its website. It described the technique as “a delicious contradiction of flavor and style.”

Wiley Roots took inspiration from Casey Brewing and Blending’s Brett Loves series, a line of hoppy farmhouse ales such as Brett Loves Citra, Brett Loves Mosaic, and Brett Loves Simcoe. Carbaugh “wanted to see how this inspiration could be executed with a kettle sour as opposed to a barrel-aged farmhouse sour,” he says. In 2016, Wiley Roots debuted one of its first sour IPAs, Tyrannos Morisette, followed by One Hop In My Pocket.

Earlier that year, Epic Brewing of Salt Lake City pinned a name on the style when it released its Tart ‘n Juicy Sour IPA. “While ‘sour’ and ‘IPA’ would normally be an oxymoron, our brewers have dialed in the flavor profile,” Epic Brewing told New School Beer at the time. And thus, a style was born.

At that time, Hudson Valley Brewery was still in its preliminary stages. Synan and his partners secured a space in Beacon, N.Y., in 2016. The following January, they officially opened to the public — and opened the region’s eyes and palates to a new beer style.

Now, the brewery releases about three to four interpretations per month, and its bimonthly can releases see lines of fans wrapped around the taproom. “It’s amazing to see how people react to it,” Synan says.

Wiley Roots celebrated its fifth anniversary in January 2019 with its largest can release yet. Five new labels hit the market, including the much-anticipated Peaches & Cream State Fair Cobbler. The beer is an imperial version of its Peaches & Cream County Fair Cobbler, a kettle-soured milkshake sour IPA made with whole-fruit peach purée, graham cracker, vanilla, cinnamon, and lactose, dry-hopped with Mosaic and Galaxy. Carbaugh believes the series “earned Wiley Roots a reputation for the style pioneered by Hudson Valley Brewery.”

Sixpoint Brewery has also refreshed its portfolio in recent months with a smattering of sour IPAs, including Stun Gun, a sour IPA with mango and pineapple purée; Dreamsicle, a sour IPA with blood orange, tangerine, vanilla, and lactose; and Party Piñata, a sour IPA with pineapple, toasted coconut, and vanilla.

Sour IPAs speak to both ends of a spectrum. They are fun for those who love nostalgic flavors, and fascinating for those who like pondering the microbial intricacies of our drinks. Despite their extensive ingredient lists and esoteric intricacies, sour IPAs might be the most approachable IPA style yet.

“It balances precision and a sense of real brewing technique with sheer joy and playfulness,” Synan says. “Because of that, the nerds can enjoy it and engage with the product on a technical level, and yet on the other hand, you don’t need to know anything about brewing or the craft beer industry, or have any context whatsoever, to enjoy one of our beers. At the same time that it’s doing all that academic stuff, it’s just really fun to drink.”

This sour IPA is a fiesta in a can, brewed with pineapple, toasted coconut, and vanilla. ABV: 8.4 percent. Average price: $9 (draft)