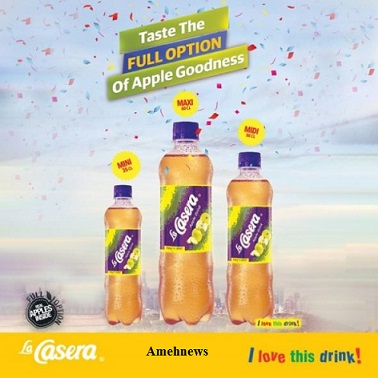 The Nigerian soft drinks industry is on a growth path after experiencing declines in the last few years, said Mr. Chinedum Okereke, Managing Director of La Casera Company, one of the leading players in the sector.

Okereke disclosed this recently in a wide-ranging interview with the media covering the performance of the sector and his company’s activities over the last year as well as projections through 2019.

The veteran of the drinks industry said that the sector witnessed a 9% growth in 2018 after posting declines in 2016 and 2017. According to him, 2019 is projected to grow about 15% if the socio-political and macroeconomic environment remains positive.

In terms of trends, the MD said the industry is witnessing a marked shift to PET bottles from the traditional returnable glass bottles (RGB) which has been a fixture in the industry for the past 60 years.

According to Okereke, La Casera Apple drink, the company’s flagship brand had a good run in 2018, with a slow and steady improvement in market share, adding that its second brand, Smoov Chapman is also becoming a household name.

He said that the company has a very aggressive plan for the year, adding that consumers should feel the strong presence of La Casera Apple in the market.

The MD noted that the soft drinks industry is clustered, with about four players in the apple drink segment. He added that there have been wild claims made by some industry participants on the level of apple content in their offerings. However, he said that La Casera Apple drink is a brand that wants to establish a point in the area of differentiation in the market. The brand is not just offering concentrates or extracts, but 5% real apple content.

Okereke challenged any other brand with proof to claims of anything close to 5% apple in their offering. The company’s brand health checks and information it receives from different sources show that La Casera Apple still remains the drink to beat when consumers are looking for the real taste of apple satisfaction in a soft drink.

“La Casera Apple is a premium brand, which is built on trust and commitment”, he said.

For 2019, the MD pledged the company will continue to give its consumers and trade partners the desired attention and experience they deserve from a premium brand like La Casera Apple, adding that it wants to ensure that it drives commercial aggressiveness, by ensuring that it has La Casera Apple and other brands from the house of La Casera acceptable, available, affordable and accessible to all its consumers.