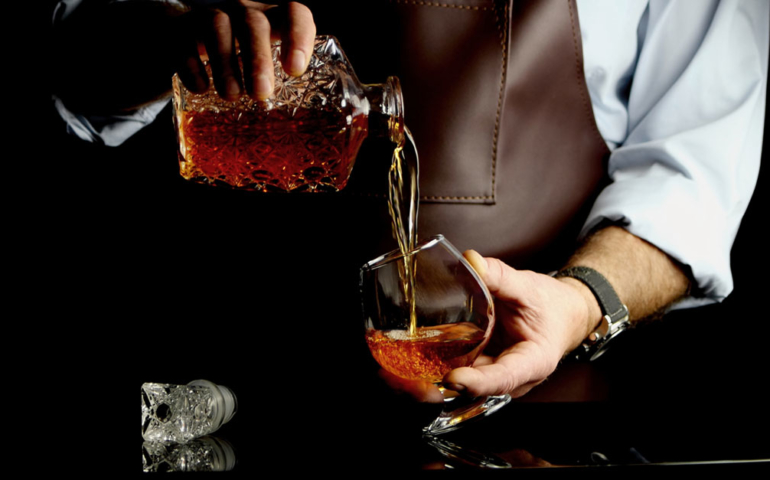 In craft distilling circles, brandy is a dark horse with major momentum. According to the Distilled Spirits Council, Americans bought 13.7 million 9-liter cases of brandy in 2017, to the tune of $2.3 billion. We bought less than 10 million cases of gin, and 9.3 million of Scotch.

“Brandy has become a quiet giant of the liquor industry,” Clay Risen wrote in The New York Times in 2017. Risen was highlighting craft brandy specialist Copper & Kings, which opened in Kentucky in 2014. Shortly thereafter, Neversink Spirits, a craft distiller that makes gin and fruit brandies, launched in New York.

Meanwhile, industry luminaries Jeff Bell (PDT) and The NoMad’s Thomas Pastuszak are courting cocktailers with their new brandy label, Bertoux. Steven Grasse, the mastermind behind Hendrick’s and Sailor Jerry, released blended and bottled in bond applejacks under his Tamworth label.

Unlike French brandies Cognac or Armagnac, which must be made in certain geographical regions with specific grapes, American brandy is a far-reaching, freewheeling affair. It can be made from wine grapes, apples, pears, plums, and so on. The category spans subtle digestifs and bartender-friendly bottles perfect for classic cocktails like the Sidecar and Sazerac.

VinePair tasted an array of new and established American brandies to compile our top picks. The list is as diverse as brandy itself, featuring everything from New Jersey apples to California wine grapes to Oregon-grown stone fruit.

Here are six of the best American-made brandies you can buy now.

With its burnt caramel color and black label, you’d be forgiven for mistaking this for a bottle of Tennessee whiskey. Copper & Kings has a leathery, campfire nose, which is likely a result of its aging in Kentucky bourbon and American white oak barrels. Its bold flavor reminded us of “fruity bourbon,” making it well suited to cocktails. “I’d love to try this in a Sazerac,” one panelist said. Average price: $35.99

Made with California wine grapes, this 80-proof brandy also appears to be courting bourbon drinkers with its black-and-gold packaging and bold, boozy taste. It’s less smooth than Cognac, leading one taster to compare it to Californian versus Burgundian Pinot Noir. “The California brandy is just bigger,” they said. It would be an excellent substitute in bourbon or whiskey cocktails — we’d especially love a Bertoux Old Fashioned. Average price: $39.99.

The O.G. of all-American applejack, Laird’s bottled in bond apple brandy is aged for four or more years in charred oak barrels, giving it a lovely dark-toffee color and spicy nose. It’s impressively smooth at 100 proof, and tastes like baked apples, nutmeg, and allspice, with subtly nutty leathery notes. We love it in cocktails and mulled wine, but it’s also a good sipper. Average price: $31.99.

A spicy, fruity nose gives way to notes of vanilla, baking spices, and the lightest hint of black pepper in this New Hampshire applejack. It’s smoother than its 90 proof might have you believe, and made from a blend of 80 percent barrel-aged New England apple brandy and 20 percent grain neutral spirits aged in oak. It’s subtle enough to sip straight, but would be a great trade-in for rye in cocktails. Old Hampshire also offers a bottled in bond version. Average price: $54.99.

Bottled at 80 proof, this unaged apple eau de vie strikes a lighter note than bourbon-adjacent Bertoux or spicy Laird’s. It is crystal clear with a bright, vegetal nose. “It reminds me of sawdust, and I mean that as a compliment,” one taster said. (Astor Spirits, a retailer in NYC, uses the infinitely more appealing term “woodshop.”) It is a bit harsh on its own but would be excellent in cocktails, which is probably why the Manhattan bar Up & Up reportedly used it in a rye and vermouth drink, the Town & Country. Average price: $54.99

Slivovitz, or plum brandy, is an Eastern European eau de vie so popular that Serbians “are advised to build houses near the best places to grow plum trees,” Blake Bailey writes in The Wall Street Journal. Clear Creek, a 1985 Oregon distiller, uses Pacific Northwestern fruits in its iteration. Its herbal nose has notes of anise and petrol, followed by a floral palate. In 2007, distiller Stephen R. McCarthy told The New York Times that he is not interested in seeing his slivovitz in cocktails. “Maybe I’m dead wrong, but I’ve sought out the fruit and gone to great lengths to insure their purity,” he said. We’re inclined to agree. “This would be a great digestif,” one panelist said. Average price: $41.99.