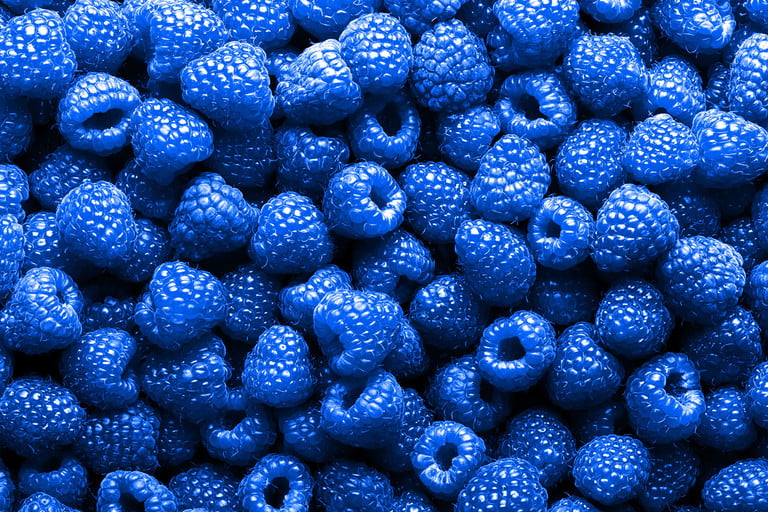 There are few flavors more head-scratching than blue raspberry. Fruit sophisticates know that such a thing simply doesn’t exist.

Yet, blue raspberry as a cultural phenomenon persists today. No packaging or shelf placement can hide its eye-catching and somewhat confusing hue. It makes its way into everything from fruit snacks and sports drinks to cotton candy and even vodka.

According to foodie lore, blue raspberry got its start in the mid-20th century. In 1958, Cincinnati food outfit Gold Medal created the stuff, looking for a way to draw attention to raspberry. The fruit, as we know, is almost always red in the wild. Giving it the blue treatment would separate it from the pack. Red was already reserved for popular fruit flavors like cherry, strawberry, and watermelon. Outside of blueberries’ claim to the color, blue was mostly there for the taking.

Strangely enough, there is actually something like a blue raspberry in nature. Also called the whitebark raspberry, the plant exists west of the Rockies in North America, from Alaska to Mexico. But it’s a relatively rare species that produces a berry that’s sometimes blue, sometimes purple, or somewhere in between.

The blue raspberry concept is one invented to capture your attention and imagination. It has become a fixture in the sweet realm especially, injected into Slurpees, ice creams, candies, and gummy treats. Its popularity begs the question: Why isn’t red banana or purple pineapple a thing?

When it came about in the ’50s, food coloring was a booming business. It upped the color intensity of unnatural ingredients and made things like candy all the more attractive to youthful eyes especially. It found a permanent home in the land of amusement venue food, at places like ballpark concession stands, carnival snack shacks, and ice cream trucks.

The color is typically created using Brilliant Blue FCF, a colorant created during the heyday of sibling additives like Red No. 3. It’s not entirely reserved for kids’ foods, as the blue dye shows up in things like curaçao. As this interesting Bon Appétit piece points out, it wasn’t until the ’70s, with the creation of blue-flavored treats like Otter Pops and ICEEs, that the blue raspberry movement really took off (the story also touches on the really interesting psychological effects of blue and how it relates to flavor perception).

It may have seemed like a funny juxtaposition at first but blue raspberry clearly stuck. Most of the major brands responsible for sweets or drinks have embraced it entirely. It remains ICEEs top-selling flavor. In short, from a consumer standpoint, we can hardly tell blue and raspberry apart anymore. City-grown kids are as likely today to be confused by a wild red raspberry sighting.

Whatever your thoughts on the flavor, blue raspberry is undeniably fun. It’s also surprisingly consistent, having never really taken its foot off the gas since its first big breakout in the early 1970s. Bartenders and chefs may chuckle or scoff at the idea but it’s had a stronghold on concessions for generations. If chefs are looking to create high-end spinoffs of iconic Americana dishes like fast-food burgers and, hell, White Zinfandel is even coming back to life, why can’t blue raspberry be taken more seriously?

Time will tell. But don’t be entirely surprised if someday soon, when we’re frequenting bars again, your barkeep throws a little blue raspberry in the mix when you ask for a bespoke cocktail.