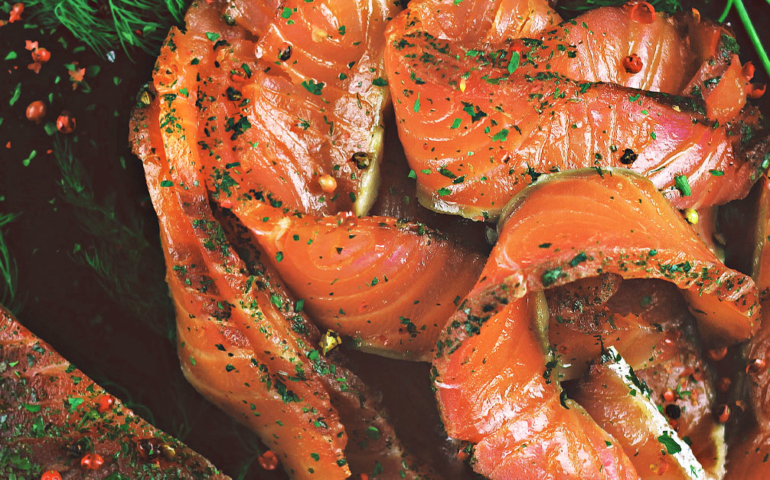 Gravlax, gravadlax, or gravlaks (depending on which country you’re in and which spelling you use) is a simple preparation of cured, seasoned salmon. It’s one of the easiest Nordic dishes to make, and is guaranteed to impress and inspire your dining companions.

The term gravlax means buried salmon and relates to the dish’s traditional preparation, by which fishermen would bury fish in the sand and leave it to ferment (and therefore preserve) over the long Scandinavian winter. In Sweden, “grav” is taken from the verb to dig, and “lax” means salmon. The sailors may also have wrapped the fish in birch bark and pine needles, possibly to help mask the pungent flavors that develop during fermentation.

Today, the fermentation part of the process has (thankfully) been eliminated, and modern cooks preserve the fish by curing it with salt and sugar. The process draws moisture out of the fish, making it inhospitable to microbial bacteria.

A number of herbs and spices, including dill, caraway seeds, and occasionally juniper berries, might now stand in for the bark and pine. Many (though not all) Scandinavian chefs also flavor their fish with such spirits as vodka, gin, whiskey, and, most notably, aquavit.

Aquavit is a neutral spirit distilled from a potato or grain mash, and is characterized by the botanicals and spices with which it’s infused. In Sweden, fennel, anise, and citrus take center stage, while distillers in Denmark tend to favor dill, coriander, and caraway. Most Norwegian aquavit spends some time aging in oak casks, giving it a distinctive golden hue.

Norwegian chef, restaurateur, and farmer Morten Sohlberg uses aquavit to flavor the gravlax at his restaurant, Smörgås Chef, in Manhattan. Before adding the alcohol to the fish, Sohlberg boils down the aquavit (or reduces it, in kitchen parlance) to lower its ABV content. He does this to balance the flavors and curing process. A small amount of alcohol can help cure, but a full-strength, 40-percent-ABV spirit “would cook the salmon and make it pale,” Sohlberg says. In its ideal preparation, gravlax should have an intense translucent orange hue.

Reducing the aquavit also intensifies its flavor, Sohlberg says, and “concentrates the extraordinarily complex profile the liquid has.”

Emma Bengtsson, the Swedish head chef at the two-Michelin-starred Aquavit in New York, sits on the other side of the fence. “I’ve seen a lot of people use vodka and aquavit when they make gravlax,” she says. “I do not cook the dish with any alcohol; the only thing I use is salt, sugar, white pepper, and dill.”

What about the flavors that gin and aquavit can impart on the fish? Bengtsson argues it’s just as easy to use the ingredients that give those spirits their character. “When it comes to alcohol, I’d rather just drink it,” she says. To each their own.

Gravlax can be served in any dish in which cold smoked fish shines, and also works well in bagels and on top of pumpernickel bread as a canape. For the most authentic Nordic experience, serve with a cold, creamy new potato salad, and a dill and mustard sauce.

The article Raising a Glass to Gravlax, an Occasionally Imbibing Scandinavian Classic appeared first on VinePair.