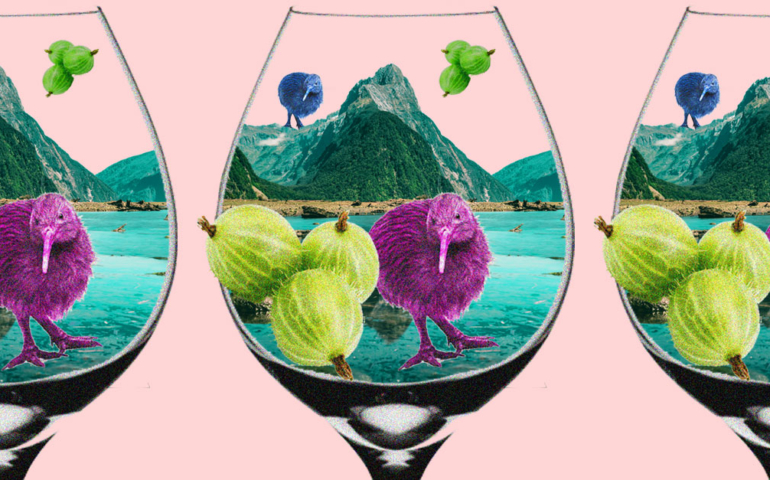 When Napa Valley luminary Robert Mondavi released his first Sauvignon Blanc vintage in 1968, he didn’t include the variety on the bottle. Instead, Mondavi called the wine Fumé Blanc.

The name paid tribute to the variety’s French heritage, and the Loire Valley subregion — Pouilly-Fumé — where it historically played a starring role. Naming the wine Fumé Blanc also distanced it from Sauvignon Blanc’s unfashionable reputation, and its association with cheap, sickly-sweet white wines.

Fast forward 50 years, and the aromatic white grape is a household name that goes toe to toe with Chardonnay and Pinot Grigio. Sauvignon Blanc is ubiquitous in supermarkets, on by-the-glass restaurant wine lists, and in this writer’s mother’s fridge, all year round.

It’s a radical shift made all the more impressive by how it happened. Sauvignon Blanc owes its success to a small, two-island nation with a population of 4.7 million. (That’s less than 1.5 percent of America’s populace.) New Zealand’s wine output counts for little over 1 percent of the world’s total, and yet it turned a scarcely known, little-loved grape into a global powerhouse.

This is the story of how Sauvignon Blanc became Kiwi Savvy B. It demonstrates the fluidity of trends, potential of certain wine regions, and massive gulf between critical and commercial success. Those who write about wine for a living might not be excited about New Zealand Sauvignon Blanc, but the millions of people buying it sure are.

According to the New Zealand Winegrowers 2018 Annual Report, Sauvignon Blanc accounts for more than 60 percent of the country’s planted vines, and 77 percent of its white grape plantings.

Until the early 1970s, however, all grape growing in New Zealand took place on the country’s North Island. Producers like Montana Wines, then the country’s largest, focused on low-quality, bulk wines. In 1973, founder Frank Yukich wanted to start producing quality bottles for export, but land in the established North Island regions came at a premium. And so he cast his sights across the Cook Strait toward Marlborough, and boldly purchased more than 1,000 hectares in the untested region.

“Wines from here will become world famous,” Yukich declared at a ceremony marking the planting of its first vines. He was right, in a way. Two producers eventually found enormous success in Marlborough. (Montana Wines was not one of them.)

In 1986, Ernie Hunter entered his oak-aged Marlborough Sauvignon Blanc to compete in the “best non-dry Chardonnay white wine” category of the U.K.’s Sunday Times Vintage Festival. Hunter’s won the gold, besting 350 entries from 13 countries. The wines went on to win the award for three consecutive years, an unparalleled achievement in the competition’s history.

Meanwhile, Cloudy Bay, another Marlborough winery, started exporting to the U.K. It earned rave reviews from U.K. critics and was suddenly in such high demand that the boutique winery had to start selling to retailers on allocation, a system normally reserved for extremely desirable, low-production regions like Burgundy.

While these two wineries were developing a global fan base, two other forces aligned to bring Kiwi Savvy B to the masses. In 1985, a major wine glut prompted the government to sponsor a vine pull. Many growers took the opportunity (and cash) to replace their then-common Müller-Thurgau and Chenin Blanc varieties with more profitable Sauvignon Blanc vines.

The vine pull coincided with an outbreak of phylloxera in New Zealand, which forced growers to replant vines with pest-resistant rootstock. For many, it was the perfect opportunity to switch from no-longer-desirable varieties to Sauvignon Blanc.

With that, New Zealand Sauvignon Blanc was off and running. New Zealand wine exports have been growing for 23 consecutive years, and Sauvignon Blanc makes up 86 percent of its $1.16 billion wine industry. Luxury conglomerate LVMH acquired Cloudy Bay in 2013. In 2010, Pernod Ricard purchased Montana Wines and renamed it Brancott Estate.

Nichole Simpson is an American wine professional with more than 11 years of industry experience. Until recently, she worked as the senior adult beverage buyer for Walmart. She says the key to New Zealand Sauvignon Blanc’s success is its distinctive taste.

“That freshness and those grassy notes are aligned with what people are looking for from their wine today,” Simpson says.

It is well positioned for the future, too. Unlike producers of similarly profitable styles, like Italian Pinot Grigio, those making and exporting New Zealand Sauvignon Blanc are not racing to the bottom of the bargain basement. Labels like Kim Crawford might share shelf space with Trader Joe’s “Two Buck Chuck,” but Kim Crawford’s flagship range commands a respectable $14 per bottle.

Don’t expect those prices to fall any time soon, either. Some estimates put the remaining amount of productive, commercially viable land in Marlborough at just 5,000 hectares. The limited land supply has led to increasing vineyard and grape prices. Which is actually a good thing for consumers, as it forces grape growers and winemakers to provide consistently high quality to remain competitive.

In wine, commercial success doesn’t guarantee critical acclaim. The same critics who celebrated New Zealand Sauvignon Blanc’s arrival in the 1980s are now keen to distance themselves from the style.

In 2013, The Guardian’s David Williams said that he fell for New Zealand Sauvignon Blanc when it first burst onto the scene, but now finds himself “unmoved” by the category. In March 2018, Tim Atkin, MW, wrote, “As several of my colleagues flew to Marlborough to attend the first International Sauvignon Blanc Celebration two years ago, I discovered a pressing engagement with my sock drawer.”

Apart from the fickle nature of wine trends, these comments demonstrate how out of touch critics can be with the money-spending public. After all, according to Wine-Searcher data, three of its top five most searched for Sauvignon Blancs come from Marlborough. Cloudy Bay and Kim Crawford occupy the Nos. 1 and 2 spots.

When Campbell likened a taste of Kiwi Savvy B to a plunge in a gooseberry bush, was that a compliment? Or was it a snipe at the style’s lack of complexity? Does wine need to challenge drinkers to be good?

How you answer those questions probably comes down to your purchasing and drinking habits. With 23 consecutive years of sales growth, though, it really won’t matter to New Zealand winemakers either way.