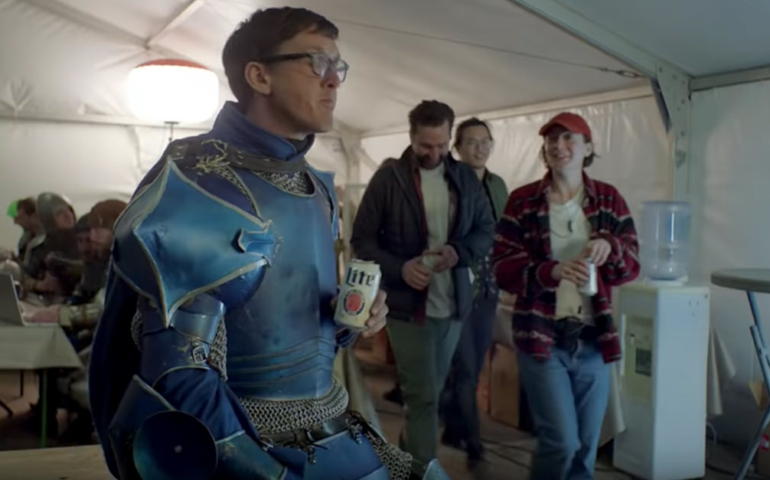 The new ads will air on television and online during the college basketball tournament, MillerCoors’ corporate blog Behind the Beer writes. They include two 30-second spots, as well as 15-second and 6-second spots.

Miller Lite’s ads pick up where Bud Light’s Super Bowl ads left off: The Bud Light knight lays slain in a field. Only this time, a director calls “cut!,” and actors proceed to their tent for a wrap beer.

“We all love a good fantasy, but people drink beer in the real world. And in the real world, more taste is what matters,” Anup Shah, vice president of the Miller Family of brands, said in the statement. “So while Anheuser-Busch is living in a fantasy world, we’re focused on making sure people here in the real world know Miller Lite has more taste, fewer calories and half the carbs of Bud Light.”

The second, below, is called “Snow.”

“I’ve been made aware of your recent advertisement,” he says. “I brought you your shipment of corn syrup, and this is how you repay me? Look: if you’re this set on imitating our kingdom, may I suggest also imitating us by putting an ingredients label on your packaging? People want to know what ingredients are in their beer! But what do I know? I’m just the king of a kingdom that doesn’t brew beer with corn syrup.” (Insert high-five here.)

Is it just us, or is the real #corntroversy that Bud Light and Miller Lite are working together, and we’re the ones being duped?