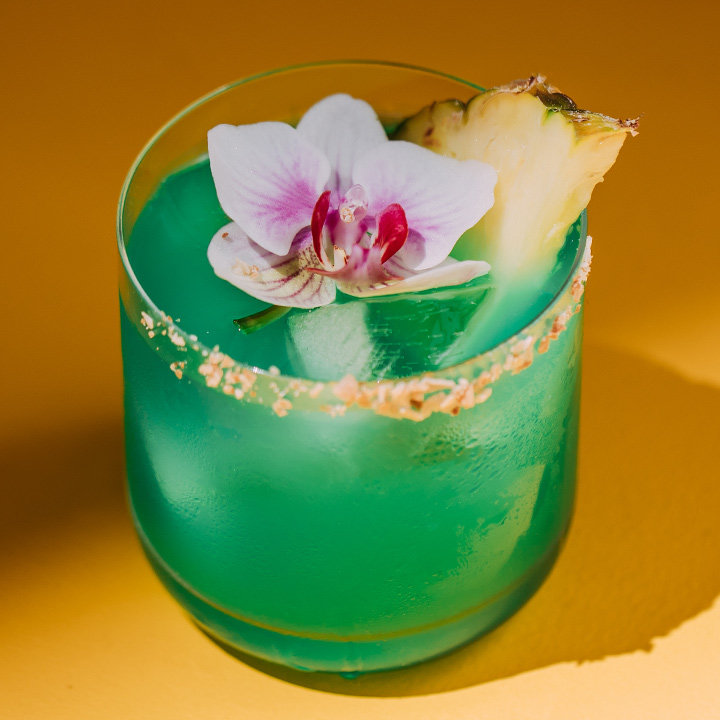 It’s a poolside sipper and a musical rom-com starring a then-skinny, ebony-haired postwar Elvis Presley. Blue Hawaii is one of those iconic cocktails that encapsulates its namesake location every bit like the backdrop of Diamond Head volcano crater on Waikiki Beach. Now a modern take at the very location where the original was first mixed pays homage to its creator and to contemporary cocktail culture.

Blue Hawaii was created in 1957 at Honolulu’s Kaiser Hawaiian Village (now Hilton Hawaiian Village Waikiki Resort) by legendary head bartender Harry Yee. The story parallels that of the Moscow Mule, in which the genesis of the recipe was to promote and sell a boozy ingredient, in this case, blue curaçao.

A sales representative of Dutch distiller Bols asked Yee to design a drink that featured this shocking azure citrus liqueur. After experimenting with several different versions, he settled on one that shook (or blended, depending on guest preference) vodka, light rum, curaçao, pineapple juice, and sweet-and-sour mix, served in a tall glass garnished with a pineapple and a cherry.

The cocktail predates Hawaii’s statehood by two years, and it’s not Yee’s only claim to fame. “He’s also credited with being the first to add banana to a Daiquiri and is also remembered for his signature garnishes,” says Benjamin Lihn, the beverage director at Hilton Hawaiian Village. “My favorite is a unique and memorable wooden back scratcher to accompany the highly potent Tropical Itch.”

But back to his timeless tipple, which made its way all over Oahu in versions that may stray far from the original. In September 2018, in honor of Yee’s hundredth birthday, the hotel hosted a reception for his friends and family, along with a bartending competition where a half-dozen local bartenders offered elevated riffs on the classic.

The Sea Blues are the Hilton Hawaiian Village’s own inspired take available at the property’s Bali Steak & Seafood. It starts with a base of Ocean vodka, which is distilled on Maui using organic sugar cane and deep ocean water, and mixed with Malibu coconut rum, Bols blue curaçao and freshly pressed lemon and pineapple juices. It’s presented over an ice sphere made with coconut water and cream of coconut in a glass rimmed with toasted coconut flakes and garnished with an orchid. As the ice melts, the drink takes on a creamy mellow flavor and silky texture that is both pretty irresistible.

As Lihn says, “There’s nothing comparable to enjoying a Blue Hawaii (or any of its thoughtful incarnations) looking out over Waikiki’s widest stretch of beach and the place that started it all.” Mahalo, Yee.