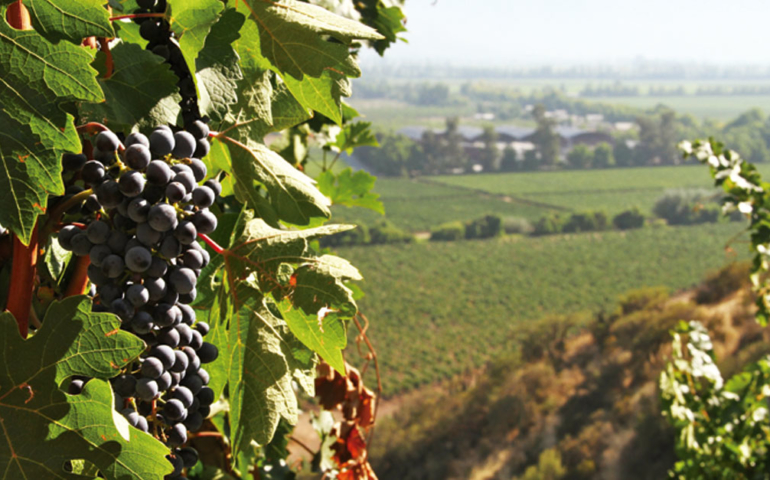 When a magnitude 8.8 earthquake struck off the coast of Chile in 2010, damage was severe. Buildings collapsed, water lines burst, and blackouts ensued. In the aftermath, winemaker Andrés Caballero wandered into the cellar of Vina Santa Carolina, where he crafts award-winning Cabernet Sauvignon, to survey the damage. That’s when he discovered something extraordinary.

“Our underground cellar is a national monument, so I had to check out some problems down there,” Caballero says. “The stairs had shifted, and in the cracks, I found old bottles of Santa Carolina.”

Those bottles listed vintages 1959, 1962, and 1967, among others, so Caballero did what any curious winemaker would do: He tasted them. “The wines, they were beautiful,” he says. “Really, really good. I said to myself, ‘I need this recipe.’” This set Caballero down a new path in his winemaking career, eager to discover how Chileans made wine in the mid-1900s, and how to recreate the elegance of the old wines he found that day.

Established in 1875, Vina Santa Carolina is one of the oldest wineries in Chile and produces some of the country’s most iconic wines. Its vineyards run from the Maipo Valley to the Colchagua and Maule Valleys in the south, growing red wine grapes like Cabernet Sauvignon, Carménère, and Petit Verdot as well as white wine grapes like Sauvignon Blanc and Chardonnay. Caballero is also collaborating on a project, called Vinos del Desierto, making wines from the old vines of the desert. Caballero has been making wine at Viña Santa Carolina for 13 years, leading the charge on the various bottlings of Cabernet Sauvignon, a grape he believes produces Chile’s best wines.

Chilean winemaking history dates to the mid-1800s. In the 1850s, wealthy Chileans began traveling the world. Those who went to Europe brought an array of influences back with them, including music, food, and, of course, wine. Chile’s original plantings (and winemakers) came from France, and the first recorded Chilean winery debuted in 1850.

As with most wine regions, the first bottlings were not very good by today’s standards. Chileans kept planting vines, but not necessarily the best ones. Meanwhile, phylloxera ravaged Europe, but never quite reached South America. Chileans kept plugging along learning about vineyard management and winemaking, and, by the 1960s, the wines offered a lot to the drinker. This is what inspired Caballero to make modern Chilean wine in an older style.

Caballero is the perfect example of the dynamism that can currently be seen in the Chilean wine industry, as many winemakers and wineries continue to push the industry forward in order to make the best Cabernet Sauvignon in the world. He is the head of many innovative projects, such as Bloque Herencia, rescuing pre-phylloxera old-vine material. For three years, Caballero and his team studied the wines they discovered in the earthquake, learning about the processes and plant materials used by winemakers before them. In 2012, Caballero crafted his first wine incorporating these influences, blending Cabernet Sauvignon from various traceable vineyards and bottling it under the Icon label.

“In the old times, they blended from different places, so I blended mine,” Caballero says. “Every time I serve the wine to people around the world who really know about wine, they say that this doesn’t feel like Chile. This is like an old Bordeaux. That is in the spirit of the old times, because when they started making wine in Chile, they did produce it like Bordeaux. It’s really a beautiful history in terms of how we make it and where it comes from.”

Caballero is one of Chile’s many winemakers finding inspiration in the past. From the vinification methods and field blend planting approaches to heritage grape and blends, Chile’s rich and almost forgotten winemaking heritage is driving much of the category’s innovations. Caballero also spends a lot of time planning for the future, particularly as it relates to climate change.

In efforts to combat small changes in the microclimates of different areas, Caballero and his team pay close attention to clones planted in various regions and how they farm each. They have also begun adding experimental blocks and playing with techniques like dry farming and late harvests. Caballero has moved Cabernet Sauvignon vines around the vineyards to produce an optimal ripening schedule, learning that they need three weeks between the first selection harvest and the last. He has let mold cover Sauvignon Blanc, then harvested it as a dessert wine.

He has made natural wines and tried spontaneous fermentation as well. “I work with seven winemakers who really, really push the system,” he says.

Caballero and his team even discovered a little-known grape called Romano mixed in rows of Cabernet Sauvignon in the Colchagua Valley. Practically extinct, Romano hails from Europe, but only a few hectares of the grape still exist in France. Caballero compares the grape to Pinot Noir, praising its fresh, fruity flavor.

Naturally, he wanted to experiment with it. “When I think about Merlot with 5 percent Romano, I think that would be a hit in terms of how it improves the Merlot with the fruiter notes,” he says. He has since planted more Romano in the vineyard.

Caballero is also inventing grapes by making his own crosses, just like winemakers did years ago to create now-mainstream varieties like Cabernet Sauvignon. (What we call “Cab” today is technically a cross between Cabernet Franc and Sauvignon Blanc, dating to the 17th century.)

Caballero produced 1,700 seeds from five crosses, and then planted 1,300 of them. He started tasting the resulting grapes and decided that 25 of them were worth propagating. “My goal is in three to four years to turn them into wine,” he says. He plans to use the new grapes in blending.

For Caballero, some of the toughest hurdles come from within. “It’s very hard to change the way you think,” he says. “I had to throw everything that I learned for many years of study, watch, and study again. Everything that was good was suddenly now bad. Everything that was supposed to be bad was now good. But I just love to be in the vineyard. We have all these possibilities.”

This article is sponsored by Wines of Chile. Taste the Unexpected.

The article Meet the Unexpected: This Winemaker Is Studying Old Vines to Create New Wines appeared first on VinePair.