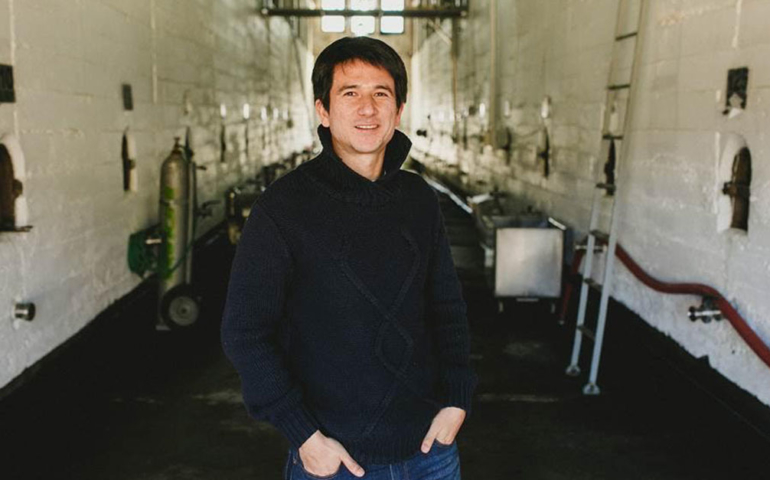 “When I was 16, I lied about my age,” Christian Sepúlveda, Bouchon Family Wines chief winemaker, admits. Unlike most of us, who were looking to score a beer or pack of cigarettes, he lied to get into his first wine tasting course in Santiago.

Today Sepúlveda is in charge of Bouchon’s many labels. He is making his mark here and on the national wine scene by combining his scientific expertise with a deep love for old, often-forgotten vines and a passion for helping develop Chile’s unique enological identity.

A Santiago native, Sepúlveda spent his weekends on his family’s vineyard near Curico, north of Maule. His family sold its fruit to winemakers, but Sepúlveda knew he wanted to make wine when he was just 14 or 15, he says. So he enrolled at the University of Chile where he received a masters in enology and viticulture. His first job out of school was in New Zealand, followed by a stint in Burgundy.

Still, Chile beckoned. Within two years, Sepúlveda returned to his home country to work as a winemaker at Viña Tabali, helping the winery produce Chardonnay, Sauvignon Blanc, Pinot Noir, Syrah, and, of course, Cabernet Sauvignon from the Maipo Valley. The latter flourishes in Chile, and the full-bodied and tannin-rich wine has become the country’s enological calling card.

In 2016, however, Sepúlveda was looking for “a bit more freedom” and to work with older vines, he says. “The north has incredible terroir and soil, but all young vines,” he says. “I love to work with old vines because you’re working with history.” It’s also given him an opportunity to try new approaches to making wine with once-forgotten grapes like País, Muscat, and Semillon, celebrating the country’s lesser-known fruits.

He was drawn south to Maule, an area that hugs the coastal mountain range a few hours south of Santiago. The “history of Chile is in the Maule area,” he says. At Bouchon, he emphasizes the soil. “The idea is to make Cabs with [the] character of the place, more than my hand or special winemaking techniques,” he says. “I try to make Cabernet Sauvignon that talks about the place.”

That sentiment also applies to another area of his work that he’s particularly passionate about: rescuing old vines in the region like those that bear Cinsault, Carignan, Semillon, and País grapes. “I love to work with old vines because you’re working with the history. I feel much more responsibility,” he explains.

Until recently these grapes were largely used for blending or entirely overlooked. Carignan’s presence in Maule is down to just 840 hectares, but those vines produce a fruit that has high acidity and a great capacity to age. Similarly, Semillon, which has citrus, floral, and waxy honey notes was nearly forgotten, but is now featured in three wines from Bouchon, he explains.

These grape varieties have persisted in the region through dry farming, meaning they aren’t irrigated. País vines, for instance, which concentrated near Bouchon, are hearty. Some survived years of being left to their own devices. Their long roots stretch 2 to 4 meters (6 ½ to 13 feet) into the soil, allowing them to weather hot temperatures, dry seasons, and climate change.

Thanks to those deep roots, you “feel the terroir much more,” Sepúlveda says. He’s grateful for the age of the vines, likening their maturity to the wisdom a person gains as they age. The resulting wine, which is gaining both national and international acclaim, is “gentle and elegant,” says Sepúlveda, and manages to be light and fruit-forward while maintaining complexity.

Sepúlveda speaks of his work with these vines as a rescue mission. “For me, the only way to rescue [them] is to make this wine and have people drink it,” he explains. And they are. Old-vine wines make up more than 10 percent of Bouchon’s sales. “For Chile, that’s a lot,” he says.

But Sepúlveda’s mission isn’t just about rescue work; it’s about helping Chile develop a new and unique identity in the wine space. In the past, Chilean wines were often praised for their value on the international stage, but now, “more people are working with old vines and and dry farming because it represents much more the identity of Chile,” he says with pride.

And Sepúlveda isn’t the only winemaker in Chile focused on this. Roberto Henriquez is “working with old vines, and trying to respect how they made wine 200 years ago,” Sepúlveda says. Meanwhile, De Martino, a winery that has worked with 347 vineyards since its inception in 1934, is also currently focusing on producing wines with a strong sense of origin.

At Bouchon, Sepúlveda’s vision is a collaborative effort with the entire team. In 2014, siblings Juan and Maria joined their brother Julio Bouchon at the winery. Together, they are bringing the winery into its fourth generation of family ownership and introducing a new vision for their wines. Sepúlveda joined them two years later and says, “The big question was, ‘who are we are and what [do] we represent?’”

Today, the answer is clear: a winery that celebrates Chile — both past and present.

This article is sponsored by Wines of Chile. Taste the Unexpected.

The article Meet the Unexpected: This Chilean Winemaker Works With History to Create the Wines of the Future appeared first on VinePair.