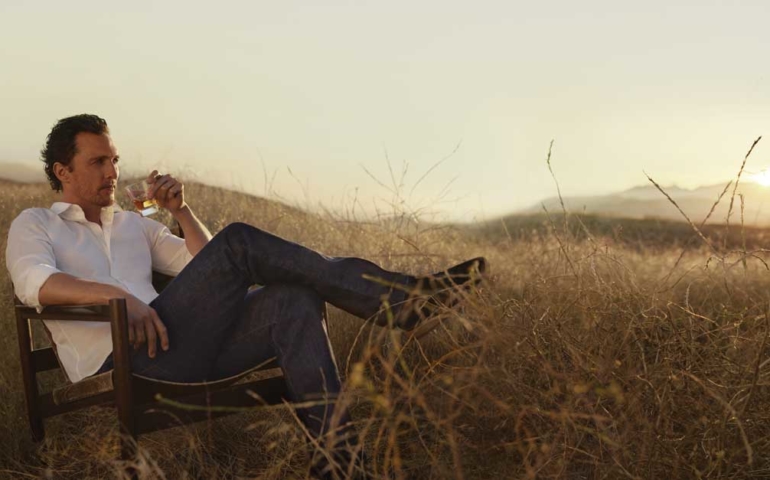 Matthew McConaughey is no stranger to the spotlight. Whether you prefer to think of the Academy Award- winning actor in “alright, alright, alright” form or as the purveyor of “time is a flat circle” wisdom is up to you, though he may prefer you to think of him instead as a guy who’s passionate about good drinks and, more specifically, great bourbon.

Since 2016, McConaughey has served as the creative director for Wild Turkey. As the chief storyteller, he both directs and stars in commercials for the brand meant to serve as a foray into his work with the distillery.

The tandem took the next step forward in 2018, when Wild Turkey debuted Longbranch, a bourbon made in collaboration with McConaughey. McConaughey says he was actively engaged in the bourbon’s creation, tasting alongside master distiller Eddie Russell until the duo landed on the result: an eight-year-old bourbon that undergoes two charcoal filtrations, the first with American white oak, and the second with Texas mesquite wood. The latter adds a unique smoky layer to the whiskey while paying homage to McConaughey’s Lone Star roots.

VinePair spoke with McConaughey to learn about his devotion to bourbon, what he drinks when he’s not drinking whiskey, and the time whiskey saved him while duck hunting.

1. What’s your go-to type of drink when you’re just hanging out at home or with some friends, and why?

Something simple and not overly complicated. The goal is to not distract yourselves with making your cocktail. Start with bourbon neat, and end with bourbon rocks.

2. Beyond bourbon, then, what type of drink is your next choice? How or when do you enjoy it?

A good bottle of wine. I prefer a red, like a nice Cab. Caymus and Darioush are two that I enjoy.

3. How have your drinking tastes changed over the years?

They got a lot simpler. No need to bring on too many mixers or add-ons. If the product is good, it doesn’t need much more than a few ice cubes. If that.

4. What’s your desert-island drink — the one bottle, cocktail, or beer you’d choose?

Longbranch bourbon, co-created by myself and master distiller Eddie Russell, is my favorite bourbon on the planet. I like it with a few ice cubes early, and neat later on. After two years of tasting and fine-tuning to get to the final product, I tasted the juice that ended up being the final product on my birthday on what one may even call a deserted island. It was perfect.

My father played ball in Kentucky, and my parents met there, too, so whiskey is something that holds memories for me. But I was never a disciple of the brown spirit until I fell in love with the process of making Longbranch bourbon with Eddie.

5. What’s the first drink you remember ever enjoying? What’s the story behind it?

You know what, [longtime master distiller] Jimmy Russell’s got a great quote on this. He says, “Yeah, most people’s first introduction to Wild Turkey 101 was a crash course. One bottle, one night. But that’s not how you’re supposed to drink it!” That was mine as well.

It was a camping trip with a bunch of buddies when we were younger. We took the 101 crash course. The second time, I was duck hunting with Dad in Arkansas. It was about 13 degrees, and we were wading through the swamps. I had a hole in my waders, and the water filled both my legs, my crotch, all the way up to my abdomen. I was freezing. There wasn’t an option of going home. So they pulled out a bottle of Wild Turkey. And that’s what kept me warm and got me through that morning without freezing my ass off.

6. What surprised or impressed you the most while learning about the whiskey-making process?

The science behind the process and how many different types of juice you can taste before you find just the right one.

7. What’s your favorite drinking destination, and why?

Wherever’s easy; whoever’s not. The best drinking destination is with the best company, whether that’s at Mardi Gras, a BBQ with friends, or on your own.

The article Matthew McConaughey Drinks Bourbon Neat, on the Rocks, or While Duck Hunting appeared first on VinePair.