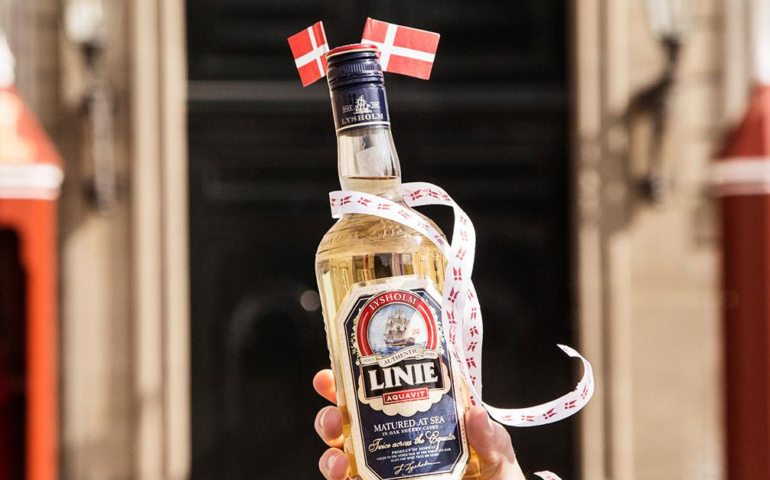 For a liquor that isn’t found much outside of Scandinavia, it’s ironic that the most important ingredient in the recipe for Linie, Norway’s best aquavit, is a trip around the world.

Aquavit, a Nordic spirit distilled from grain or potatoes and flavored with caraway, dill seed, and other herbs, has existed in Scandinavia at least since the 16th century. According to its earliest recorded reference, in a letter from 1528, “aqua vitae,” meaning “water of life,” was believed to be a health tonic that could “alleviate all ills a man’s body can have.” To this day, aquavit is often drunk to ease digestion.

The most important discovery in aquavit, however, occurred almost 300 years later. As legend has it, in 1805, a Norwegian trading family, the Lysholms, loaded a boat with northern foodstuffs headed for Batavia, today’s Indonesia. Among the cargo was five casks of aquavit. By the time they got to the hot East Indies, however, the aquavit was less appealing than local drinks made from rum and arak. The barrels were returned to Trondheim.

Something amazing happened during the nearly two-year journey from Norway to Indonesia and back again. The roiling sea, changing temperatures, and shifting humidity on the trip had accelerated the maturation of the spirit and caused it to assume more distinctive sherry aromas from the shipping barrels. In short, the globetrotting aquavit was more flavorful than it had ever been before — and the people of Trondheim loved it.

In the late 1830s, Jorgen B. Lysholm’s Trondheim-based distillery began stowing its aquavit in oak barrels on ships loaded with dried cod headed for Rio de Janeiro and other South American ports. Lysholm named his product Linie, or “line,” in homage to the equator, which was crossed not once but twice in order to produce his distinctive spirit.

Technically, “linie” is a style of aquavit, not a brand; Lysholm simply assumed the name for his own distillery’s intrepidly traveling spirit. While some, like Norway’s Arcus distillery, have reportedly gone so far as to subject their aquavit casks to extensive rocking and various types of weather while still on dry land to bypass the need to cross the equator, it’s been to no avail — the experimental liquor reportedly came out too light in color and taste to be a true “linie,” suggesting there truly is something about the voyage that makes it special.

Every drop of Linie still travels across the globe before being bottled and sold. It’s stored in 10- to 15-year-old oloroso sherry barrels and then loaded onto a Wilhelmsen cargo ship, where it fills around 5 percent of the vessel’s shipping containers. Over a four-month journey, the ship stops in more than two dozen ports in the U.S., Latin America, and Asia, and crosses the equator twice before returning home. Back in Norway, the spirit, now a light amber color with a delicate vanilla nose, is bottled and marked with the date of its sea journey.

Linie Aquavit, distilled from potatoes and flavored with caraway, aniseed, and orange peel, has taken its seat at the head of the table of Norwegian drinking culture. There, imbibers sip or quickly down shots of aquavit, often served at room temperature and preceded by a gulp of beer. It’s drunk year-round, but is especially popular alongside fatty roasted pork and lamb dishes served on Christmas and Easter.

The Norwegian tradition varies somewhat from those of its northern neighbors. Whereas aquavit in Denmark and Sweden is often light in color, aging aquavit in an oak cask for a minimum of a year is common in Norway, resulting in a darker, more distinctive character.

Germany, too, has its own aquavit, hailing from the state of Schleswig-Holstein, which was part of Denmark until the 19th century. Typically distilled from fermented grains instead of potatoes, German aquavit also has a slightly lower alcohol content (38 percent) than Scandinavian aquavits, which tend to be as much as 45 percent alcohol (Linie is 41.5 percent).

Aquavit has yet to find its sea legs in the U.S., though it is slowly gaining popularity. Almost 50 distilleries produced aquavit in 2017, up from fewer than 10 in 2012.

Whether Linie is, in fact, Norway’s best aquavit is debatable — Loiten and Gilde are also well-loved brands — but the spirit has won heaps of metals for its well-balanced flavor. And its future looks rosy: As the world’s only “linie,” Norway’s equator-hopping spirit will continue to have its passport stamped regularly.