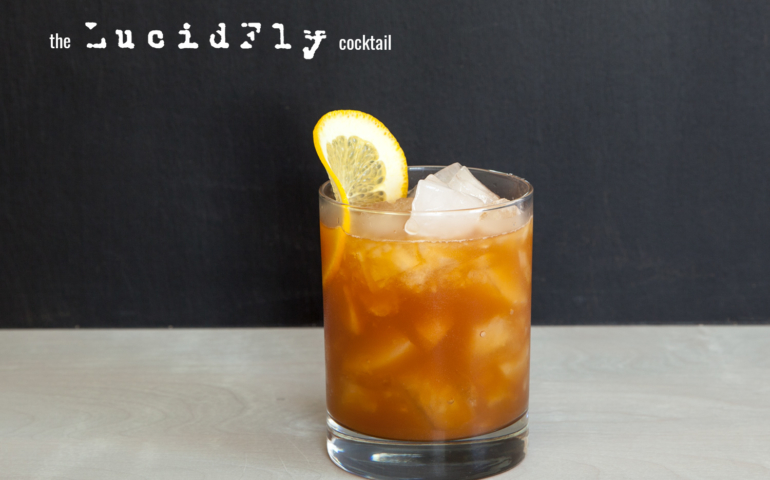 Admittedly, I’m not the world’s foremost authority when it comes to music. Hell, my musical taste falls somewhere between “what now” and “uh, ok.” Alice, on the other hand, she knows music. That’s why back when we started working together and she told me that her officemate Doug had a band and that they were good, I knew they were gonna be good. That was my introduction to Lucid Fly and (drum roll) they’re finally releasing their first studio album! Doug asked if we could come up with a cocktail for their album, who was I to say no? Introducing the Lucid Fly Cocktail!

First things first: go check out their album Building Castles in Air and buy a copy or three (you’ll love it, promise).

Second things second: Doug decided he wanted to task us with some challenges for this Lucid Fly-inspired cocktail. As if it wasn’t enough of a challenge already? Fine by me. I like a good challenge.

Our challenges were that this cocktail would have to be something that they could pre-make into a batch for serving from a pitcher or dispenser and they wanted a non-alcoholic version for, uh, reasons escaping me, but I’m sure they are very good reasons.

For inspiration, I riffed off the meaning behind their band name with space, space flight and astronauts (now you see where I figured it’d be as easy as a piece of astronaut ice cream).

To that end, there was only one base this cocktail could have — the drink of the spacemen, Tang!

From there, it was a matter of thinking like a rock star. What good rock star doesn’t appreciate bourbon? None that I can imagine. Near as I can tell, if a Jack on the rocks good enough for the Chairman of the Board (that’s Frank Sinatra for you non-Sinatra folks out there), then every musically inclined star approves of bourbon as a rule.

Now that we had a solid base of Tang (epic!) and bourbon, I wanted to play with their album Building Castles in Air and the first single, “Visions of Grandeur.” Those both have dreaming, imagination and vision in common. The tool to help? Absinthe.

After toying around with the flavors, we added cherry liqueur and cherry bitters to round everything out nicely.

Oh, and the non-alcoholic version? Done and done. Tang plus cherry juice plus star anise simple syrup. Won’t give you visions. Or a buzz. But tastes pretty good.

Now, onto the Lucid Fly Cocktail!

Add all of those in your pitcher without ice (you don’t want to water it down). Stir, shake, rattle, roll or whatever you want to combine. Toss in some orange slices to look awesome. Then distribute to whatever drinking glasses you use. Those will have your ice. Oh, garnish those with orange rounds too if you’re feeling super decorative.

If you want to make the boring non-alcoholic version, that’s 3 parts Tang, 1 part cherry juice, 1 part star anise simple syrup (take one part water and one part sugar, boil them with a bunch of star anise in it). If you’d like more volume, I’ll let you handle that math.