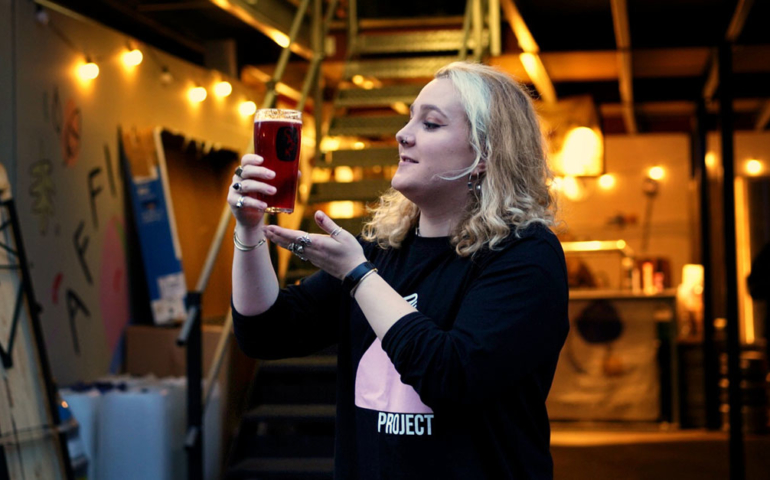 On Friday, April 26, 2019, at approximately 6 p.m., 40 bars and taprooms across the U.K. celebrated the simultaneous launch of Queer Royale, the first beer released by the Queer Brewing Project.

The Queer Brewing Project (TQBP) was created by Lily Waite, an artist and beer writer seeking to raise awareness of LGBTQ issues in the beer industry. A transgender woman, Waite wants to initiate change.

“It’s hard for me to think of another individual I’ve met as radical, relevant, and deeply needed as Lily Waite and the Queer Brewing Project,” Gabe Barry, Brooklyn Brewery’s education manager for Europe, tells VinePair.

The Queer Brewing Project is planning an ongoing series of collaboration beers with breweries designed to raise awareness of queer issues in the beer industry. While the project is queer-focused, Waite is intentionally working with a variety of breweries, not just those with queer leadership, in an effort “to reinforce the idea that inclusivity is an issue to which everybody has a responsibility,” reads the company website. A portion of each beer’s sales will go to different charities.

Through one-off brews in the U.K. and abroad, the Queer Brewing Project is giving a voice to queer and other marginalized groups, one conversation-starting beer at a time.

“Now is the time to actively move towards dissolving the binary and systemic heteronormative gaze as we build the community that we want to live in,” Barry says. “Lily Waite and the Queer Brewing Project are that change.”

Barry first encountered Waite’s work in an article published in Good Beer Hunting in January 2018. At the time, Waite was working as a content creator for a U.K. beer events company, as well as freelance writing and authoring a personal blog, Craft Queer.

In June 2018, Waite collaborated with Manchester’s Marble Brewery during Manchester Beer Week to host an art exhibition examining the ways queer and trans identities intersect with intolerant communities. The instillation and its companion beer were both called “Dinosaurs Will Die.” The beer was a tropically flavored gose brewed with passionfruit, guava, and papaya. It came in a bright pink can. But what struck people most was its message.

“It felt like a really big deal to put the words ‘queer’ and ‘trans’ on a beer label,” Waite says.

It turns out, it was. Several months later, Waite received a message with a photo of the empty beer can on a bedside table. The sender said “it just meant too much to them to throw it away,” Waite says.

Others sent her messages “saying ‘this is incredible, it feels great to have a queer beer in the world,’” Waite recalls. Twitter followers thanked her “for being a visibly trans person in this backwards, sexist industry.” One person was even inspired to come out.

It was time, Waite decided, to put her words into action. In February 2019, she approached Affinity Brewing Co., a small brewery in London, to be her first brewing partner.

Together, they created Queer Royale, a blackcurrant pale ale, pledging to donate 10 percent of sales to MindOut, a U.K. LGBTQ mental health charity. The Queer Brewing Project officially launched on April 26, 2019 with a launch event at Affinity Brewing Co. An estimated 300 pints were sold on one of the brewery’s busiest nights.

Although Waite’s work seeks to normalize “taboo” topics among mainstream audiences, her efforts speak to a need for better representation within the beer industry itself.

“One place I believe the industry has work to do is in making sure folks from the LGBTQ community are visible to those looking in on the industry,” Toni Canada, a writer for Beer Kulture, writes VinePair in a message.

Canada believes the Queer Brewing Project is a good example of this visibility and shows “that there is room for us in the industry, and can encourage people to pursue hobbies or careers in beer,” she says.

“You can’t be what you can’t see. Including more people from marginalized groups helps foster diversity of thought, which will further help with outreach and expanding the consumer base in beer or any other industry that makes inclusion a priority,” Canada says.

Waite’s efforts join others in the beer community eager to create better representation and equality for all beer drinkers. “I’m just doing my bit,” she says.

When Rebecca Sandidge and Kate Summerill started Queers Makin’ Beers in 2015, “we wanted to make beer but also make friends,” Sandidge tells VinePair. The LGBTQ homebrewing group launched in Oakland, Calif., with two members and now has nearly 1,000 members across chapters in California, Florida, and Oregon.

“Because we are queer and our membership is racially diverse, a diverse array of queer people who have no brewing experience want to join,” Sandidge says. “I always say that brewers should be just as diverse as beer is. We’re making that happen.”

At Local Brewing Co., a women- and lesbian-owned brewery in San Francisco, the taproom design, soundtrack, and beer offerings are all thoughtfully inclusive, with “[e]verything from lagers to IPAs, to nitros, to fruit and coffee beers,” Regan Long, co-founder and brewmaster, told The San Francisco Chronicle in February 2018. “We’re really creating a spectrum of beer,” she said.

Annual acknowledgements (and creative acronyms) are certainly better than none, but Waite and her collaborators hope to impart a more permanent change.

As diversity and inclusion become central to discussions in the beer industry, from London taprooms to U.S. trade events like the Brewers Association’s Craft Brewers Conference, Waite believes normalizing these topics through beer “just makes it a little easier for everyone.”

The article Lily Waite Is Making the Beer World a Better Place, One Collab at a Time appeared first on VinePair.