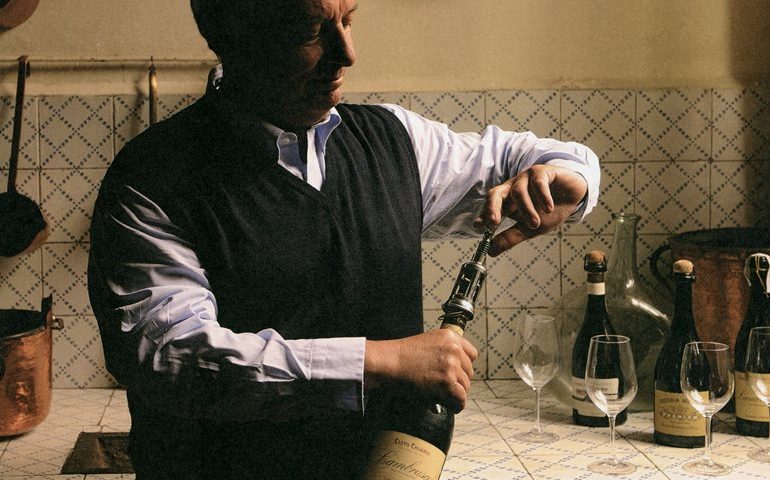 Wine fans have had a complicated relationship with Lambrusco. But, as sweet styles step aside, Damien Gabet finds a new wave of wines are appealing to a new audience

Not sweet, red not white, and nothing at all to do with Lambrini – few categories have as much work to do in debunking myths and clawing back a tattered reputation as Lambrusco. It’s largely our fault. And the Americans’.

In the 1970s and 1980s rapacious winemakers from Emilia-Romagna recognized an appetite in both the UK and the USA markets for white Lambrusco. Which, to be clear, isn’t really Lambrusco. Or rather, it shouldn’t be. Patchy production statutes allowed for this low-quality, super-sweet fizzy drink to be labeled ‘Lambrusco’ – and off it went. Propose ‘Bianco’ to an Italian consumer however, and you’re likely to be received with incredulity and suspicion. Duty reforms made low-abv products cheap and so the market shifted again to accommodate, creating a new partially fermented froth and calling it ‘Lambrusco’.

In the first few years, Britain and the USA’s puerile palates couldn’t get enough, and there was a deluge. This, exclaims Tommaso Chiarli of Cleto Chiarli winery, was a ‘disaster’.

Prices dropped so far the market imploded. With retailers keen to maintain volume, they found a new friend in the syllable-stealing Lambrini, which isn’t wine at all, but perry – made in the UK. And so the erroneous association was born.

Consumers did then what they’re doing now with bottom-quality Prosecco – turned their noses up at Lambrusco. But Lambrusco proper, the frizzante DOC label stuff, can be dry, and balanced, and interesting. Made using mainly five indigenous varietals, it’s been vinified and drunk by carousing Italians since time immemorial. There are youth and celebration in its DNA, but its roots are brut and there are dainty tannins hiding in those thin skins.

This means Lambrusco allies joyously with the terroir’s innumerable porcine treats: Parma ham, Culatello, or Cotechino (stuffed and sliced pigs trotters). Generally, it loves cutting through fatty, flavorsome bites, cleansing as it effervesces. Matteo Montone, the arch barkeep at The London Edition hotel, loves it with Grana Padano or ‘anything spicy’. And that’s why Emilians – proud denizens of ‘Italy’s larder’ and sentinels of localization – love the stuff. So, is this a story of redemption? Sort of. The vast majority of exports still conform to the same insulin-spiking recipe that Thatcher’s Britain so adored. Stack-‘em-high cooperatives in the region aren’t helping. But the category has an increasing number of quality zealots – like Chiarli – who are bent on paving a ‘path towards a true quality Lambrusco market’.

Things in the UK are looking up, too. ‘In the current drinks market our tastes have veered away from sweeter wines and are tending towards the drier and crisper. It’s a sign of us appreciating the core aromas, taste, and feel of wines. Old-school style Lambrusco just won’t cut it,’ says Sunny Hodge, the Londoner behind Diogenes The Dog and the new natural-wine focused Bar Aspen.

Of the various appellations, Lambrusco di Sorbara, made principally with the namesake grapes, has Rolls-Royce status. Fragrant, light-hued, and with the bracing acidity needed to penetrate
a cured sausage. Other grape varieties of note include Lambrusco Salamino, Lambrusco Grasparossa, Lambrusco Maestri, and Lambrusco Marani. Some producers in these regions are moving beyond big-tank Charmat fermentation, returning to in-bottle ‘ancestral’ yeasting, thus conjuring cloudy, curious expressions.

Others are bent on producing wines of notable complexity and even – dare we say – elegance, à la Metodo Classico. Hodge takes pleasure in defying expectations and is currently flaunting Lambrusco’s versatility with a bone-dry Medici Ermete Phermento, served, ‘cool, young and at the beginning of it all’. Unfiltered Radice by Paltrinieri (from Sorbara) is the other preferential drop chez Sunny. Most importantly, though, it’s the attitude with which one should approach the wine. ‘Tumblers, flutes or red wine glasses all do the job – it’s a drink to be enjoyed without too much contemplation.’

‘Some regions have bad reputations they don’t deserve, so it all comes down to the producer,’ says Tom Beattie, somm-in-chief at P Franco. He’s currently serving bottle-fermented Quarticello Ferrando, but at no point do customers read or hear the word ‘Lambrusco’. ‘Perhaps I’m subconsciously avoiding it, but I prefer to focus on the producer and the region.’ John Baum at The Winemakers Club admits that a lot of his customers don’t recall the taste. ‘With wines like Lambrusco, the only way to get people to re-taste is almost to force it upon them. Here that’s done by offering small samples. Or listing it as the sole sparkling wine of that week.’

Charlie Blightman, head somm at Noble Rot, does something similar by regularly having an ‘eclectic and irreverent wine’ on offer by the glass between the regulars – Champagne and an English sparkler. ‘You can have something traditional or something more out there – up for it?’ But, this is audience-specific. A ‘certain market’ – hipsters – are more open minded about non-traditional wines – orange, natural, skin-contact, etc. ‘Lambrusco seems like less of a crazy prospect to them,’ he says. Rather than a red-trouser fan who came to wine via, say, ‘their grandad’s cellar’. Baum meanwhile remains optimistic: ‘Hopefully, in time, people will have a little more faith in this humblest of wines.’