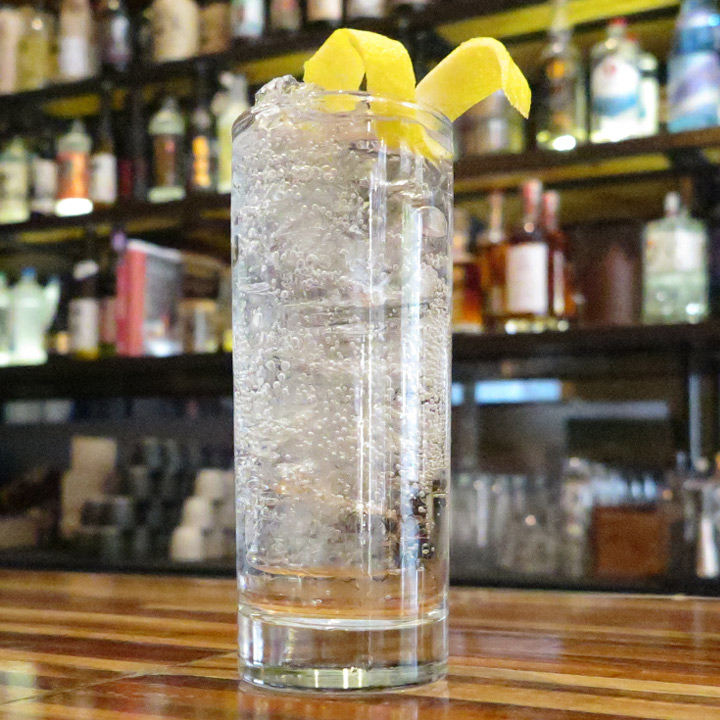 Whether it’s a symptom of the low-carb, low-calorie beverage blitz or a result of our ceaseless affection for Japanese cocktailing, one thing seems certain: These are high times for the highball. The spirit-soda mix is sweeping the country, one cocktail menu at a time. Enjoying its own rise is Japanese gin, with brands like Kinobi, Nikka Coffey and Suntory’s Roku, gaining popularity stateside. So it’s unsurprising that more people today are enjoying a new low-sugar version of the Gin & Tonic, the Gin Sonic.

The name suggests something big and powerful. But at its chiseled core, the Gin Sonic is a somewhat healthier version of the Gin & Tonic, comprising 1 1/2 ounces of a quality gin with 2 1/4 ounces each of soda water and tonic water. It not only reduces the amount of sugar and some of the quinine’s inherent bitterness but also allows for the botanical flavors to shine through.

“Gin & Tonic can be too sweet,” says Victoria Vera, the general manager of sake and shochu bar and restaurant Tsunami Panhandle in San Francisco. “When you do half soda, it balances it and brings out the flavor of the gin.”

Vera first tasted a Gin Sonic at Bar Trench in the Shibuya ward in Tokyo last summer and was immediately taken by it. So much so that when she returned to San Francisco, she added a Gin Sonic, made with Roku gin, to the cocktail offerings at Tsunami.

“People don’t get that correlation of ‘sonic’—soda and tonic—right off the bat, but when they do, they want to try it, especially gin and highball lovers,” says Vera. “It’s one of my favorite cocktails. I like to recommend it to my guests.”

As with a Gin & Tonic, Vera will change up the garnish depending on what botanicals comprise each gin. With Roku and Nikka Coffey, she uses a yuzu peel; with citrus-forward Kinobi, she’ll use a lemon wheel to add some bitterness. She has experimented with Hendrick’s and used cucumber.

“The Gin Sonic allows for simple and subtle garnishes to play a supporting role in the flavor of the drink,” says Simon Ford, the founder of Ford’s gin. “Just a slice of lemon, orange or grapefruit works wonders, or floating an herb like a sprig of lemon verbena adds a subtle and bright freshness.”

Masahiro Urushido, the owner of New York City’s Katana Kitten, which was named best new American bar at the 2019 Tales of the Cocktail in New Orleans, agrees with Ford. He prefers using a juniper-forward London dry style along with a fresh citrus peel or lime wedge to balance the drink’s piney notes.

But it’s also how it’s made that can make or break a drink, in his opinion. Urushido tasted his first

Gin Sonic almost 20 years ago but admits it likely didn’t have a name back then. He was living in Japan and working in an upscale restaurant after high school where they had smaller bottles of higher-quality soda water and used hand-carved ice with well-selected spirits, he says.

“It’s always about the right vessel and ice and those details,” says Urushido. “If you just use shitty ice, it just melts right away, so it kind of tastes like flat tonic water. In the right context, you can actually taste the difference between gin and tonic and what’s so great about the Gin Sonic.”

In addition to taste, a possible reason people enjoy a Gin Sonic is that it’s a bit healthier than a higher-sugar Gin & Tonic. By cutting the sweetness of the tonic water and adding soda, the Gin Sonic could catch on at a time in America where people are more health-conscious.

“It runs perfectly parallel to what drinkers desire at this point in time: a little bit healthier for a little sacrifice in flavor,” says Danny Shapiro, a partner in Chicago’s Scofflaw Group, which owns the popular gin-focused bar Scofflaw. “Soda has the power to soften gin’s edges; it can bring out flavors that might have been too acute otherwise,” he says. “I’d go with higher-proof gins, above 45% ABV, for the Sonic treatment.”

While the Gin Sonic has gained popularity in Japan, whether it will catch on in America still remains to be seen. But as the U.S. has followed Japan with enjoying that country’s super-popular whiskey and also highballs, the Gin Sonic may be next.

“The highball has been popular in Japan for years, with the trend hitting the U.S. only relatively recently,” says Gardner Dunn, a senior Japanese whiskey ambassador for Beam Suntory, which produces Roku gin. “Sonic is more widely enjoyed in Japan but could easily continue to grow in the U.S. as more people try the delicious drink.”