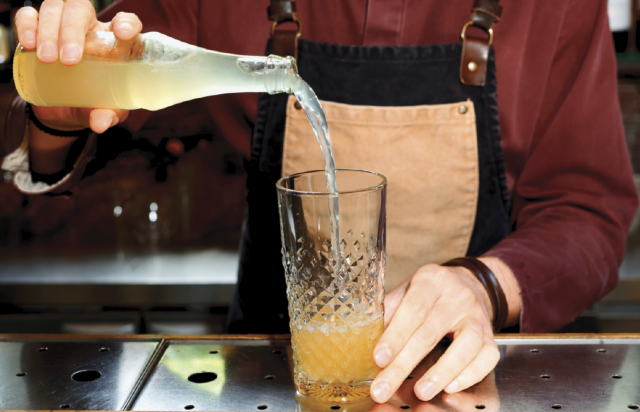 Low and no-alcohol serves have become a major force in the drinks industry. But while beer, cider, and spirits have taken off in this sector, wine is lagging behind. Edith Hancock discovers what is powering this revolution.

It’s a strange thing when, for the past six months, we’ve had over 1,000 people visiting our website every day just to read a slideshow feature on non-alcoholic beer.

Food and mocktail matching, sober raves and mindful festivals are in vogue. No longer just for designated drivers or killjoy gym bunnies, it is now a “ridiculously exciting” time to want to order a low-ABV drink at the bar, according to Shilen Patel, co-founder of the Diageo-funded accelerator Distill Ventures.

Distill has worked with all kinds of craft beverages, from Australian whiskey distillers to German vermouth brands, but arguably its greatest success is its support of non-alcoholic ‘spirit’ brand Seedlip. Launched in 2015, today it is served in over 6,000 cocktail bars, hotels, restaurants, and retailers in 25 countries, and last month became the official partner of the Michelin Guide in the US.

Distill published a white paper on its research into the non-alcoholic drinks trend this year. Launched in May, it broke down low-ABV drinks growth from three perspectives: restaurant and bar owners; consumers; and producers.

The latter also included bartenders, highlighting the appeal of a multi-layered beverage that has been crafted in the distillery and on the counter, and how Distill Ventures is treating the category like any other alcoholic product, with its own flavor profile and target audience.

Patel says while Seedlip has been the runaway success story for low-ABV drinks in the off-trade, as the category matures, “there is a lot of space in this area to target different occasions and consumers. There isn’t just one type of person looking to cut down on alcohol consumption. After an initial flurry of Seedlip lookalikes, we’re seeing more coming through.”

Seedlip is well aware of this, and has already brought a sister brand to market; Aecorn Aperitifs, designed to solve the problem of what to drink at dinner if you’re not drinking alcohol. Rich Woods, drinks development manager at Sushisamba Group, and now the co-owner of east London cocktail bar Scout, works closely with Seedlip and DV, curating a menu of alcohol-free drinks that were paired with a three-course dinner at a recent DV launch event.

Two of these bore a likeness to wines; a lightly carbonated, pale lemon “wasted wine”, made with grape skins, banana peel, and wild chamomile; and a pale pink still strawberry-scented beverage with a mouthfeel very close to light rosé wine. As the category grows and consumers become more comfortable with the idea of a substitution that is as good as the original, brands find more occasions they can cater for and problems they can solve. Once the first drink of the night is done, the next is often found at the dining table.

This presents a problem for some of our readers. Last year, sales of beer and cider with an ABV of between zero and 1.2% grew in volume and value by more than 40%, according to retail figures collated by Kantar, but wines in that alcohol bracket haven’t had the same success. Value growth has stagnated, and volumes fell by 2.1% in the same period.

Another research firm, Nielsen, recently released figures of its own that showed wine is “a sizeable category within no- and low-alcohol drinks, and has sold just under £40m, or 6.1m 75cl bottles in the last year”, but sales for low-alcohol wine showed a “small level of growth”, it said. Nielsen added that it “comes without any of the big fanfare launches that we’ve seen in beer”.