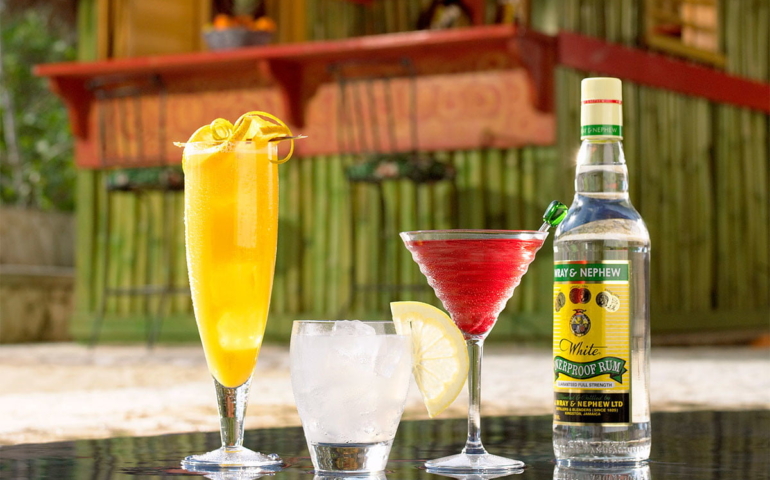 To understand Jamaican overproof rum, open a bottle and inhale—just not too deeply. It clocks in at 126 proof, or 63% alcohol. You’ll get the point without sticking your nose too far into the bottle.

“One of my favorite things about Jamaican overproof rum is that you smell what it’s going to taste like,” says bartender Jen Akin of Seattle’s Rumba. “I like to pour it when I teach someone what an ester is, what funk is. It’s a concentrated punch in the face of flavor.”

Rumba’s back bar houses 40 to 50 Jamaican rums, a third of which are overproof. Akin uses rums like salt in cooking. “Sometimes you need a little salt; it makes everything better,” she says. “I’ll often add a quarter-ounce or a few dashes of overproof rum to cocktails that need a little oomph.”

Akin’s approach, while familiar to American bartenders, is all but unimaginable in Jamaica. “I never drank white rum. I thought it was something for old men,” says Christelle Harris, the marketing director of Hampden Estate, the distiller of overproof Rum Fire. “Only in the past few years has the perception changed, and now you see more young people drinking it.”

Historically, overproof white rum has been a working man’s drink. Older generations drink it with water (never with ice), milk (to coat the stomach), or a bite of cheese. Rum is part of Jamaican funeral rituals and sometimes passes as medicine.

Zan Kong’s grandmother would soak a cloth in Wray & Nephew and rub it on his forehead to help clear congestion. Kong, who’s the export manager of Worthy Park bar and its Rum-Bar line, also swears by the “Jamaican flu shot”: Drink two shots of overproof rum with honey and lime, wrap yourself in a blanket, and sweat it out. Harris’ grandmother kept a flask of it on her bedside table—not to drink but to inhale like smelling salts.

Esters Are the Key to Its Distinctive Flavor

White rums from the island of Jamaica are potent queens of funk, a title earned from the quantity and combination esters found in each bottle. Esters form when an acid combines with alcohol. Aromas like pineapple, overripe banana, stone fruit, and even cake occur when foul-smelling vinegar mingles its molecules with booze.

Just as whiskey nerds know how many parts per million (PPM) of peat there are in a bottle of scotch, rum heads measure ester PPMs in Wray & Nephew, Rum Fire, and Rum-Bar, the three major Jamaican overproof brands. While there are other styles of rum with a proof to match Jamaica’s white rums—among them Bacardí 151, Lemon Hart 151 and bottles labeled as overproof or navy strength—they don’t have the same depth of flavor.

“On paper, Jamaican overproof rums are all very similar. We’re making 63% white rum. We all do two- to three-week fermentation, but we’re different based on a few variables,” says Kong. Those variables include yeast strains, molasses, the use of a muck pit (more on that in a moment), and still type.

Wray & Nephew is synonymous with Jamaica overproof rum. Made by Appleton Estate and its master blender, Joy Spence, it’s the best-selling rum on the island. Of the three brands, it’s the only one made by blending rums distilled in both pot and column stills. The latter still type produces fewer esters, so the blend isn’t quite as aggressive as its peers. “It’s still assertive but not so crazy-over-the-top,” says Akin.

“Jamaicans understand rum from a Wray & Nephew point of view,” says Harris. “They understand the strength and how to use it socially and in different cultural practices.”

Harris is a member of the Hussey family, who took over Hampden Estate in 2009. Up until they arrived, Hampden distilled high-proof rum exclusively for export to Europe, where it’s aged and incorporated into rum blends. “We were told that Hampden rum was famous all over the world, but we’d never heard of it,” she says.

Part of the mystique of Hampden is that it’s one of the few distilleries producing rum as if it were the 1700s. It uses vintage copper double retort pot stills, relies on spontaneous fermentation from wild yeast, and cultivates acid-producing bacteria in muck pits. (Remember: Acid plus alcohol equals esters.) The muck pits sit 8 feet below ground and house dunder (or waste left over from distillation), spent sugar cane, lees, lime, and other substances. When the team at Hampden distills rum, they add fermented molasses, fresh cane juice, dunder, and a bit of luck to each batch.

“Without the muck pit, you can’t make Hamden rum,” says Harris. “It can’t be picked up and moved.” While the Hampden is capable of making rums with esters of up to 1,600 PPM, Rum Fire’s ester count registers at 500 to 570 PPM, which is still more than double that of Bacardí or Havana Club. “It’s a flavor bomb,” she says.

Exports still make up the bulk of Hampden’s business. Though Hampden won’t confirm it, Smith & Cross rum is widely recognized as Hampden juice that has been shipped to England for aging and blending. It has all the funk you’d expect from a Jamaican rum with a slightly less fiery 57% alcohol.

Worthy Park is the only distillery on the island that grows and processes all of its own sugar cane. The estate dates back to 1670 and runs one of three remaining sugar factories on the island. (Gruppo Campari, which owns Appleton and Wray & Nephew, also operates a sugar factory.) Historically, most of Worthy Park’s rum was sent abroad to age and blend, and its stills sat dormant from the 1960s until 2005 when the owners built a new state-of-the-art facility.

Worthy Park’s Rum-Bar overproof is a blend of three marques, or recipes, each with varying degrees of esters and alcohol. While all the marques are distilled in double retort pot stills, each one relies on a different yeast strain for its character. Depending on the marque, molasses are fermented with dry activated yeast, proprietary yeast strains, or wild yeast propagated in vats of molasses, sugar stalks, and cane juice. The Rum-Bar line, which also includes lower-proof silver and gold rums, launched in 2007. Along with Rum Fire, the brand marks an evolution in selling (if not making) overproof rum. “Brand development in the Caribbean and Jamaica is a relatively new thing,” says Kong.

How to Use It in Cocktails

Back in the States, bartenders have fully embraced the rums. At Queens Park in Birmingham, Ala., owner Laura Newman carries Wray & Nephew, Rum-Bar, and Smith & Cross. (Rum Fire isn’t available in Alabama.) Her cocktail program focuses on the classics, and she tweaks drinks like the Hotel Nacional by introducing Smith & Cross in lieu of a Spanish-style añejo rum.

“Jamaican rum is fun to float on top of a drink because of its powerful aromas,” says Newman. “It’s usually pointless, but in the case of overproof rum, the float has a sensory effect. You really get that nose.”

Akin makes sure drinks don’t go down too easily. A chuggable overproof rum cocktail is a dangerous drink. She also adjusts tried-and-true ratios to accommodate the rum. “You might need more mixer, more sugar, more juice or soda—whatever you’re making,” she says, noting that you often can dial back the rum in the drink recipe from 2 to 1 1/2 ounces.

To start mixing with overproof rum at home, you can do as Jamaicans do and keep it simple. Kong makes overproof Daiquiris and mixes Rum-Bar with cola or Ting, the Jamaican grapefruit soda. Harris drinks Rum Fire with soda and lime.

“My suggestion for nascent home bartenders using the rum for the first time is to recognize that a small amount gives an unusual depth of flavor to any cocktail. It’s the experienced bartender’s flavor standardizer for their cocktails. It gives a touch of class to any cocktail. I even use it in my lemonade at home,” says Spence, who’s arguably the grand dame of Jamaican rum.

More advanced home bartenders can concoct a Rum Punch or make a Paloma riff using Ting and overproof rum. Akin suggests building drinks that complement the esters found in each bottle—think Rum Fire with banana liqueur or Rum-Bar and pineapple.

Whatever you make, there’s no hiding Jamaican overproof rum. “The flavor of the rum speaks to quality,” says Harris. “Jamaican is the birthplace of flavor, as far as I’m concerned, with overproof rum.”