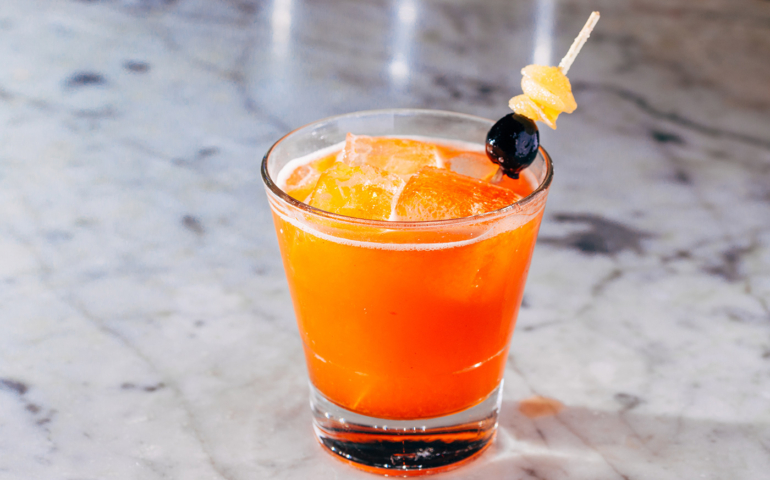 Ohm Suansilphong drank alcohol for the first time as a 15-year-old. His poison: Mekhong and soda. He got carried away drinking with friends and stumbled home drunk. “My parents didn’t really yell at me, though. What were they going to say? They were selling it,” says Suansilphong.

Now chef and co-owner of Fish Cheeks in New York City, Suansilphong was born into a Chinese-Thai merchant family in Sukhothai, a province about five hours north of Bangkok. The family business, started by his grandfather, sold a little of everything and a lot of Mekhong.

First produced in 1941 in a distillery once run by the Thai government, Mekhong essentially is a spiced rum. It’s named after the Mekhong River that flows from China through Myanmar, Laos, Thailand, and Cambodia to Vietnam, and it’s the closest thing Thailand has to a national spirit.

Mekhong is distilled from a co-ferment of 95% molasses and 5% rice and then blended with native herbs and spices and sweetened with honey. Its characteristic color comes from added caramel rather than barrel aging, and generations of Thai drinkers have erroneously referred to it as whiskey. (If you Google “Thai whiskey,” you’ll find the confusion persists.)

“People saw Mekhong as a brown spirit and associated it with Johnny Walker,” says Suansilphong. “For the longest time, everyone just called it whiskey and drank it like whiskey.”

Mekhong was long considered an old man’s drink or the spirit of choice for students on a budget. “When you went to college and your parents transferred your money, you’d drink scotch at the beginning of the month and beer and Mekhong at the end,” says Boong Boonnak, the owner and chief drink maker at Mahaniyom in Boston.

Even as cocktail programs emerged in Bangkok’s hotel bars and upscale restaurants, they borrowed from Western drink-making traditions. “There were no menus with Thai spirits,” says Asawin Rojmethatawee, the owner of Tep Bar in Bangkok’s Chinatown. “Every bar and restaurant was trying to be someone from New York or England or some other imported brand. We were the only ones daring enough to celebrate who we are.”

Rojmethatawee opened Tep Bar in 2015 as “a cultural bar of Thailand” with Thai-rooted drinks, decor, textures, music, and food. He stocked local rice wines, Iron Ball gin, Phraya rum, Sangsom, Issan rum, and Mekhong, among other Thai spirits. At first, the business was rough. He had only convinced one investor to support the bar. His own mother predicted he would fail within six months. “We could only afford 12 bottles of Mekhong at a time. It’s 4,000 baht a case. Back then, we needed cash flow,” says Rojmethatawee.

Despite his mother’s warnings, Tep Bar has thrived, and from its success, Mekhong and other Thai spirits have begun to emerge on cocktail menus across the globe. At any given time, Rojmethatawee features four to five Mekhong drinks on his menu, most of which pair the rum with local, seasonal fruits like guava, lychee, mangosteen, or passion fruit. The Thong cocktail includes Mekhong, mango, wild honey, dill, lime, and gold; the Musketeer has gooseberry-infused Mekhong, makrut lime leaves, clove, and tonic.

“In Thailand, it’s very hot, and drinks that give you refreshing feelings are ideal for us,” says Rojmethatawee.

As a general rule, Tep Bar does not serve classic cocktails. The Mantra is an exception, born from a “sneak attack” from a well-known bartender who came into Tep Bar one night and ordered a Negroni.

Bowing to hospitality, one of Tep’s bartenders combined ginger- and date-infused Mekhong with Campari and sweet vermouth. Guests initially found the drink’s aroma “unbearable,” says Rojmethatawee, but a few tweaks, including adding a few drops of herbal Thai bitters, cured the cocktail’s nose and cemented its future menu status.

The Spirit Crosses the Pacific

At Mahaniyom in Boston, Boonnak serves Thai-ified classic cocktails, including a Thai tea-infused Sazerac, a chrysanthemum Gin & Tonic, and an Aviation riff with butterfly pea flower extract. Mahaniyom is just a few months old, and Boonnak is still petitioning his distributor to add Mekhong to its portfolio, but he’s looking forward to serving a Mekhong-based Gold Rush or Jungle Bird—the latter enhanced with a cinnamon-clove syrup to play up the rum’s spice.

Rojmethatawee says most pineapple drinks take well to Mekhong, and infusing the spirit with tropical fruits or subbing it in for cachaça in a Caipirinha works well also.

Dev Johnson of Employees Only fame developed the cocktail program at Fish Cheeks, and most of the drinks lean fruity and refreshing to accompany Suansilphong’s bold and spicy cooking. The only spirit-forward drink on the list is the Thai Old Fashioned, built with bruised makrut lime leaf and lemon peel; Mekhong; and Angostura, orange, and spiced chocolate bitters.

The spicy flavor profile of Mekhong (officially including ginger, chiles, star anise, and cinnamon, and likely lemongrass, galangal, cloves, and more) naturally pairs well with Thai food. “In a cocktail, you can juice it up or let Mekhong speak for itself, as in our Thai Old Fashioned. It’s an intensely flavored cocktail that works with our intensely flavored food,” says Suansilphong.