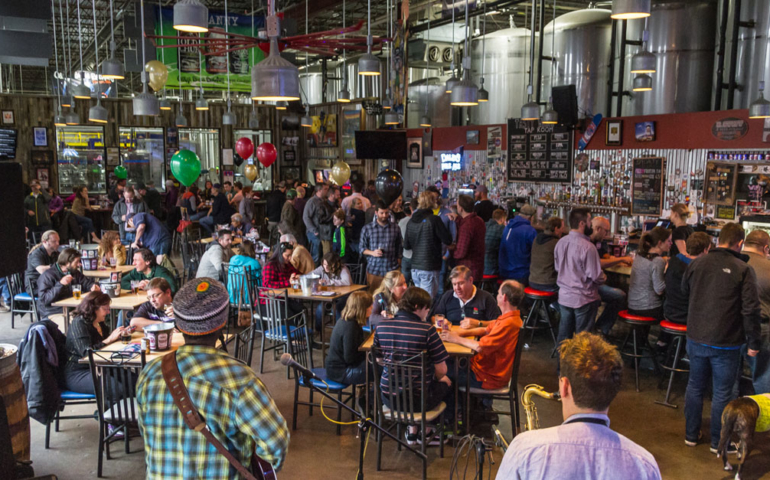 Brewing operations originally launched in nearby Lyons in 2002, but in 2008, Oskar Blues expanded to Longmont, which is now home to Oskar Blues’ hybrid brewery and taproom, plus a fleet of OB restaurants.

Longmont’s destination Tasty Weasel Taproom pours such Oskar Blues classics as Old Chub alongside newcomers like the Can-O-Bliss Tropical IPA. There is live music Thursday through Sunday and, when it’s nice out, the garage-style doors open to the breezy outdoor patio.

Yes, you came for the beer, but dining at one of Oskar Blues’ Longmont restaurants is also essential. There’s CHUBurger, a design-your-own burger spot; Homemade Liquids & Solids for Creole and Southern-influenced comfort food; and CYCLOPS Bike Cantina is equal parts bike shop and taqueria.

Cans may be trendy now, but Oskar Blues was an aluminum innovator. The first craft brewery to can rather than bottle its brews, Oskar Blues aimed to package its beers in a vessel that you could easily transport while hiking, biking, or doing any other outdoor adventure.

Canning also made recycling easier. Oskar Blues’ Crush It Crusade partners with communities to launch local recycling programs, and the equivalent of more than 33 million cans have been recycled so far. The brewery even hosts the Burning Can Festival every summer, a celebration of breweries that have also embraced the can.

As part of the Can’d Aid Foundation, the OB team does a lot of good to promote bike culture, from building bicycles for low-income children around the country, to maintaining multi-use bike trails, to and encouraging children to get outside more.

Oskar Blues is distributed in all 50 states and in 17 countries. So when you’re here, use the opportunity to taste something you can only get in the taproom. Every first Thursday of the month, a small-batch beer is released as part of the specialty Barn Burner series. These rare beers are brewers’ chance to break loose and experiment, like with the recent dry and crisp Gypsy Squid Extra Brut Pilsner or the Check Yo’Self Golden Double IPA.

Keep your eyes out for the limited-released Ten Fidy Imperial Stout, or its boozier cousin, the Barrel-Aged Ten Fidy. The latter hangs out in bourbon barrels for at least eight months, giving it flavors of oak, vanilla, and, of course, bourbon. Another limited-release fan favorite is Death by Coconut, an Irish porter with an inviting balance of dark chocolate and coconut.

Instinct might tell you to skip Dale’s Pale Ale since it’s available nationwide and is probably one of the most widely found beers on menus throughout Colorado. However, there’s something about having the beer that started it all at its birthplace that makes a visit to a brewery really special.

Instead, skip Mama’s Little Yella Pils. While it’s truly a great drinkable brew, and it’s a winner of a Great American Beer Festival silver medal, it’s also found year-round nationwide and among many taps in Colorado.

Summer is the optimal time to visit Longmont and the brewery so you can appreciate the close proximity to the mountains for biking and hiking and take part in some of OB’s iconic events.

The G’Knight Ride is an annual city-wide biking celebration that starts out with a 1-, 5.5-, or 13-mile ride and ends at a beer garden with live music and food trucks. (The dates for the 2019 G’Knight Ride are pending, but it’s usually in June.)

Hotel options in Longmont proper are limited, so either check out an apartment rental or, if you’re minding budgets, the Best Western Plus Plaza Hotel. It’s less than a mile from the Tasty Weasel Tap Room, Oskar Blues Homemade Liquids and Solids, and many other drinking and dining spots.

Slightly farther afield lies the St. Julien Hotel and Spa in Boulder. It’s about a 25 minute drive from Longmont but has 201 plush rooms (many with mountain views) and a 10,000-square-foot spa.

The article How to Get the Most Out of Your Visit to Oskar Blues Brewery appeared first on VinePair.