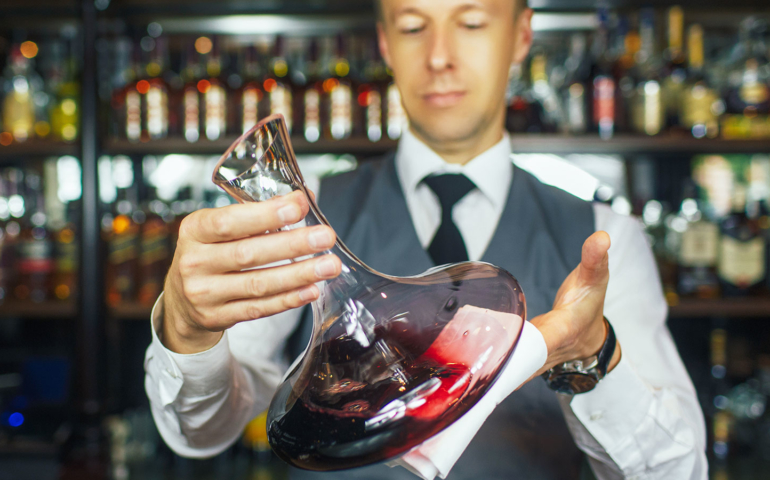 Coronavirus means many of us are stuck at home but that hasn’t stopped some inventive sommeliers from reaching their customers. But is there more that can be done?

Take the team at Elephant & Castle’s wine mecca Diogenes the Dog, for example, who have just launched a home delivery sommelier service to help people pair their wines with what they’re cooking at home.

Guests can call up the restaurant, describe what they’re making, and the team will talk them through pairings, styles and preferences, before delivering two bottles of the callers’ choice.

The simple yet ingenious idea came from Diogenes the Dog founder Sunny Hodge. ‘We’ve always been about not making service transactional,’ Hodge explained to Imbibe. ‘Everything that we have done for the last year is about interaction and… making strong, meaningful relationships with all of our guests.’ ‘I’ve got all my guys who are trained to the eyeballs, and have so much information and knowledge to share.’

It’s a clever idea, and yet Hodge seems to be one of a very small number of people talking about it loudly to consumers. Why does he think that is the case? ‘People’s idea that we can’t do it. It’s about planting the seed that instead of going to Sainsbury’s, they can come to us. If someone comes into the shop for a bottle of wine, I’ll ask what they’re having for dinner and suggest what would pair nicely – why can’t we still do that?’

And it seems his initiative is working – he’d already received seven or eight calls on the day that we spoke to him.

Of course, apart from keeping business afloat, another reason for creating initiatives like this is that sommeliers across the country aren’t working in their natural environment. In particular, young sommeliers who spend most of their time in a restaurant or bar floor are no longer able to, losing their connection with their customers.

‘Sommeliers are a little bit like both cats and dogs,’ laughs Jan Konetski, director of wine at Ten Trinity Square. ‘We love company, but we also like being able to put our identities in front of people. I got into wine because I loved customer interaction. I was a waiter in a fine-dining restaurant and did my apprenticeship [alongside] an MS in Germany. He was full of knowledge but he was also an amazing entertainer –he knew when to make a joke or tell a story… It’s why i got into the job initially.’

Sommeliers are a little bit like both cats and dogs. We love company, but we also like being able to put our identities in front of people

While Konetski’s senior role now sees him spending more time in meetings, planning lists, inspiring his team (arguably, tasks he can still do at home), younger workers are the ones who spend more time on the floor – a floor which no longer exists. ‘If you are removed from a restaurant, in a junior role,’ he continues, ‘it’s quite tough because you’re used to running your service every day, interacting with people, seeing all the things that inspire you day-in-day-out.’

Hodge also cites being out of a natural environment as a stumbling block for service professionals: ‘People are either out of jobs or being furloughed, so there is no sense of creativity.’

One of the biggest movements within the wine service industry since the covid-19 pandemic shut venues is the wine delivery market.

‘I think this is a really positive thing because it will encourage the public to order more wine from independent businesses  [in the future] rather than your classic high street shops and supermarkets,’ says Melody Wong, wine specialist and former head sommelier at Cambridge’s Midsummer House.

Among them is Top Cuvée, a partnership between chef Brodie Meah and bartenders Max Venning. ‘Without being egotistical, I don’t think our customers realize how much they rely on us [when it comes to selecting wine],’ says Meah.

Without being egotistical, I don’t think our customers realise how much they rely on us

Having spent the last week or so offering wine delivery, the pair are now launching set menu deliveries with the option of adding on the suggested wine pairing. They will also be launching online wine tastings for Meah to run on Instagram Live. He’s slightly nervous about this new way of working: ‘I’m not one to look to be in the spotlight, so it will be interesting.’

Indeed, social media is quickly changing how the wine world is interacting, with tastings moving online – check out Wine Hour at Home – as well as general communication and information sharing.

Konetski goes live on Instagram three or four times a week to talk to his followers and numerous peers. ‘People can tune in and have a chat. We haven’t had any drinks or wine topics yet – it’s a lot about getting together and having a laugh – but in the coming weeks I’m going to have winemakers calling in as well as saké producers [and professionals who deal with] tea and coffee.’

He also cites Wine Folly as being a community- and knowledge-gathering resource on social media for helping the likes of commis sommeliers navigate through these strange and difficult times.

We may only be in the premature stages of what is thought to be a few months of closure, but Konetski, Hodge, and Wong already have thoughts on how this unprecedented situation will change the world of the sommelier.

‘As an industry, I’m in shell shock over how many well-funded companies have turned on their teams,’ says Konetski. ‘We should keep how [employers] reacted in mind when we look out to who is going to be our new boss in the future… We never know what shit is going on in the company, but it is really about how they said goodbye to you.’

Wong sees the future of young sommeliers as being in the balance.

‘I’ve been thinking about this for several days,’ she laments. ‘I’m very fortunate to be in a senior role, so when it comes to laying off [staff, we] are not an obvious choice. It will be junior team members, or part-time staff who are spending more time studying WSET diplomas… showing passion for the industry…. there’s been a lot of heartbreak.’ As a result, she thinks that junior sommeliers will in the future be looking to work for larger venue groups or hotels, rather than small or independent restaurants.

She also thinks customers will become savvier when it comes to restaurant prices of wine when venues reopen. ‘I think there will be a very big difference in buying patterns,’ she laughs, giving the example that customers won’t want to pay £45 for a bottle of wine they bought and had delivered for less than £20.

For me, I’m hoping the next few months will be a time for customers to really appreciate what goes into the profession of being a sommelier. Wong has even had friends texting her, asking her what wines to order online: They know one or two that they like, but when they’re buying a case they don’t know which other [wines] to choose.’

With lockdown in full force, I may just follow their lead.