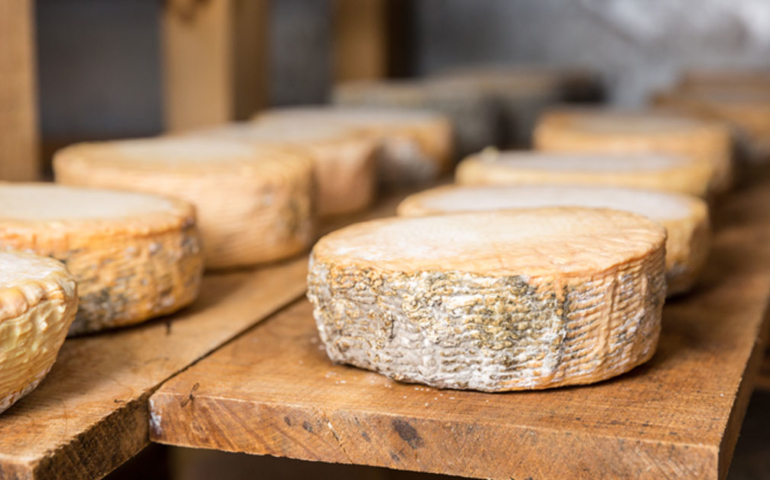 “There were only a handful of American cheeses that you’d really want to eat” in the 1970s, says Ruth Reichl, author and former restaurant critic of The New York Times. Sure, we had Vella Dry Jack, Cabot Cheddar, and “maybe a few more,” she says; but generally speaking, American cheese was forgettable, mass-produced stuff.

Laura, who everyone called Laurie, was a scrappy young idealist who got into cheesemaking with no money or lofty goals. Her cheesemaking room in Sonoma, Calif., “couldn’t have been more than eight feet square,” Reichl recalls. Chenel knew her goats by name and would greet each one with a kiss. “It was so sweet,” Reichl says — but it also became “game-changing.”

Chenel was one of the “goat ladies of the eighties,” or American women cheesemakers who began making quality goat cheese in the 1980s. Others included Judith Schad, founder of Capriole Goat Cheese, who grew her business out of a 4-H program for her children. Jennifer Bice of Redwood Grove grew up in a goat-dairying family and “wanted to offer something new to our loyal customers” when she took over in 1978.

For Vermont Creamery founder Allison Hooper, making goat cheese was born out of a passion and skill she learned while traveling in France. “When we started, profit and making money wasn’t top of mind. We just wanted to do this thing,“ Hooper says. “We didn’t have a growth plan, we were just trying to see if we were going to be in business the next week and the next year.”

“I wasn’t worried [about the big picture],” agrees Schad. “I was too busy milking goats, making cheese, and trying to be a businesswoman, the least of my talents.”

Cypress Grove founder Mary Keehn was a “serious hippie” who was in search of quality milk for her four children. According to Cypress Grove’s website: “She asked her neighbor if she could buy two of her goats and the neighbor replied with a grin, ‘Honey, if you can catch ‘em, you can have ‘em.’ So a determined Mary went out with grain each day and eventually lured her first two goats: Esmeralda and Hazel.”

“It really was that spirit then, that’s what animated that first wave of cheesemakers,” says Reichl. “They loved cheese and they were naïve.”

Learning to actually make the cheese required a lot of trial and error, but selling it proved even more challenging. Laini Fondiller, owner of Lazy Lady Farm in Vermont, called the American market for goat cheese in the early 1980s “awful” in The New York Times.

“People had a lot of problems with the cheese,” says Hooper. “Everybody needed a little hand-holding.” The cheese had to be sold, but “we did not have the resources to create the category.”

Their saving grace? “Restaurants like Spago and Chez Panisse that embraced it pretty quickly and put it on the table for people. Usually in the form of a salad,” Reichl says.

In 1981, then-10-year-old Chez Panisse placed a standing order of 50 pounds of Chenel’s cheese per week. It was baked, breaded, and served alongside simply dressed mesclun greens.

Hooper started working with French chefs in New York City, who were thrilled to have American-made products of the same quality they’d been buying from France. “Chefs really created these food trends,” Hooper says, “and with goat cheese, it was the salad that did it.”

“We had traveled to Europe and eaten the food there, then come back and thought, ‘Why can’t we do this here?,’” Reichl reflects. “But then, of course, we could do it here.”

One of the ways the goat cheese pioneers became so successful was eschewing competition for community. “We had to start [a community] and really rely on collaboration.” Bice says. She also cites the 1983 founding of the American Cheese Society for its community-building efforts.

“We didn’t know what we were doing, and we had problems that we didn’t know how to solve, so we’d call each other up and talk about it and try to figure it out. We worked together with the regulators so they’d understand our milk and our cheesemaking process,” Hooper says.

The movement spawned national appetites for American-made goat cheese, certainly. But its impact was even bigger than that. The combined efforts of these goat ladies led to “an explosion of American cheesemaking” in the ’80s, Reichl says. Hooper agrees, saying the goat cheese producers essentially launched the specialty cheese movement in the United States.

“Goat cheese was the beginning of it,” Reichl adds. “That was the moment of, ‘Oh! There’s no reason why we can’t make great cheese in America.’ It wasn’t just goat cheese that happened, everything else was spurred on by that.”

“It changed the way we eat in America.”