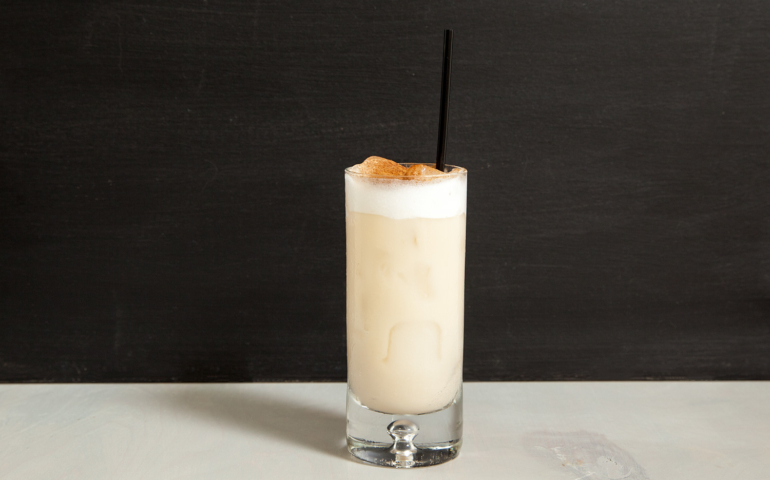 Whenever I get Mexican food (a favorite, but growing up in Southern California that almost goes without saying), I always, without fail, every single time order horchata. If you’re unfamiliar with horchata, it’s a magical elixir of tastiness — think of it as rice pudding, but in drink form and lighter. It’s refreshing. Knowing that, it was only a matter of time for me to tackle this most amazing of drinks in booze form, let’s get down with the Horchata Cocktail!

The first thing to know about horchata is that it’s a rice drink — you basically soak rice in water overnight, with some cinnamon, then blend the hell out of it, strain and you have a rough approximation. There are variations with almonds, other spices, etc. I tend to prefer a little bit of almond flavor, so I started there.

My experimentation began with almond milk. I didn’t want it to be too heavy, hence avoiding milk, cream or anything similar. With the Horchata Cocktail, I was looking for a refreshing, yet slightly boozy, rendition. If you want pure dessert, check out the Tres Leches Martini — that’ll satisfy your inner sweet tooth.

From there, it was about hitting on the other big flavor in horchata: cinnamon. I knew that just tossing some cinnamon on top would look nice (and hey look, we did!), but it wouldn’t infuse the cocktail with enough flavor. Time for one of our favorite tricks: infused simple syrup.

To make the cinnamon infused simple syrup, you just take one part of sugar to one part of water, bring to a boil with a cinnamon stick or three, then let hang out until cool. The longer it hangs out, the more infused it’ll become.

After I’d locked down the base flavor (almond milk) and accent flavor (cinnamon simple syrup), it was a matter of picking the alcohol. Well, we are talking a Mexican favorite here, there really wasn’t any choice. Hello Mr. Tequila. Oh, and as a background play, let’s bring in some almond liqueur as well.

Now we’re cooking with tasty, refreshing, elixir of the gods!

Onto the Horchata Cocktail!