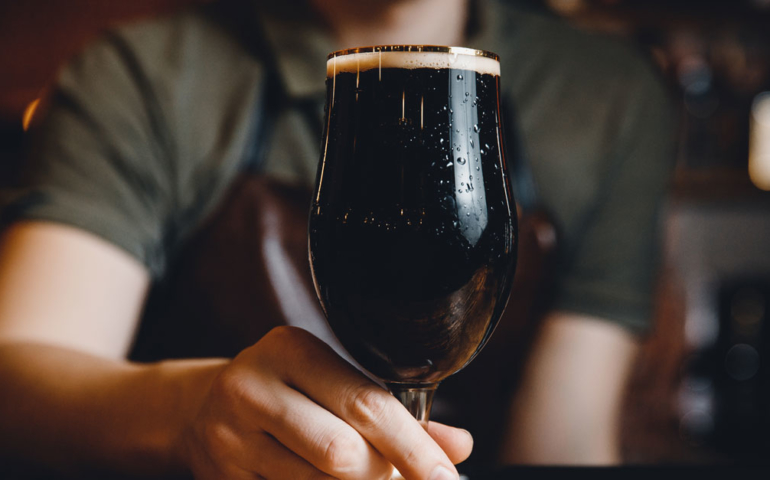 In a Facebook post on Tuesday, Hyndman wrote, “I have something very serious to talk to you about today. It’s about the discrimination that I have observed in the craft beer industry. Specifically, the discrimination against black beers.” It then mimics Martin Luther King Jr.’s “I Have a Dream” speech (“I have a dream of a world where beers are judged not by their color…”) and accuses those who have not tried this beer of being “anti-black-ite.”

The final, painful punchline: “I am renaming Sultry Black – Black Lagers Matter.” Signed, “the most woke brewery in town.”

This “woke” brewery also produces beers with such names as Crazy Stupid Bitch and Genocide.

Twitter and Facebook users reacted quickly, calling Hyndman out for being on his bigot bullsh*t for longer than this post’s brief existence. The posts were deleted, but several people, including a VinePair staff member, saved screenshots of the originals. We’ve shared one above.

Later, Hyndman posted a lengthier reply, saying he is “incredibly sorry,” “would do anything to take it back,” and “the fact that people are calling me a racist is hurting me to the bone.” He notes that it “didn’t occur to [him] that it would be harmful or offensive.”

In his second statement, Hyndman joins a long line of people who apparently feel victimized when they’re made aware their racist, sexist, or otherwise offensive actions impact others. I couldn’t help but think of a similar sentiment written by Louis C.K. after a series of sexual assaults became public: “There is nothing about this that I forgive myself for. And I have to reconcile it with who I am.” (For what it’s worth, I don’t think Hyndman is as much of a psychopath as Louis C.K.)

I would have thought it would go without saying that a brewery should never, in any case whatsoever, promote itself or its beer by making light of Black Lives Matter.

I love black lagers and can think of many ways to get people excited about them. None involve making extremely hurtful “jokes” about black Americans who have been killed in their cars, in front of their children, and in the street. That does the opposite of make me thirsty for schwarzbier. It makes me ill.

After a recent announcement that it would be revamping its “World’s Most Refreshing Beer” bit, MillerCoors is launching a “creative agency review” for Coors Light, AdAge reports.

MillerCoors cited “the stated need to better connect with younger legal drinking age consumers” for the review. The current agency, 72andSunny, has worked with Coors Light since 2015.

Although Coors Light is the second best-selling beer in the country, right behind Bud Light, its sales have been declining, with shipment volume decreasing 6 percent last year. And considering the current #corntroversy affecting the beer industry’s biggest players, perhaps it’s time for the “world’s most refreshing beer” to hit refresh.

It saddens me that consumers are moving away from beer — even regular ol’ Bud Light — and toward alternatives like Bud Light Orange and spiked seltzer. I’m a champion of beer in all its forms, but there is something disappointing about the need to make up for market share by moving further and further away from the core product.

On March 1, 19 Crimes, a wine brand with labels inspired by 19th-century convicts, announced the launch of three craft beers: an IPA, a pilsner, and a lager.

The beers will be available in 6-packs for a suggested retail price of $12.99, and cans will feature the faces of “convicts-turned-colonists” John Boyle O’Reilly, Michael Harrington, and Cornelius Dwyer Kane, who were criminals sentenced to live in Australia and later became “pioneers in a frontier penal colony,” according to 19 Crimes. Like its wine bottles, the beer labels will have augmented reality capability, by way of the Living Wine Labels app. Users can scan the can and watch its respective visage tell their story.

“We know that our 19 Crimes wine lovers also highly index as consumers of craft beer … and our retailers and customers have been asking us to expand into other alcohol beverages,” Michelle Terry, CMO of Treasury Wine Estates, producer of 19 Crimes, said in a press release.

There are several examples of boutique brands successfully making both beer and wine, but this feels like a step backward. Beer is suffering as a category, losing market share to wine and spirits. The craft beer market is increasingly competitive with more than 7,000 breweries vying for consumer attention. Why, then, is a gimmicky wine brand entering the craft beer space?

Booze is confused. In a world where spiked seltzers are considered beers, the biggest beer corporations are investing in alcohol-free alternatives, and PBR is a whiskey, maybe it’s not so shocking that a millennial-facing wine brand would try its hand in the beer game. After all, it’d be criminal not to try.