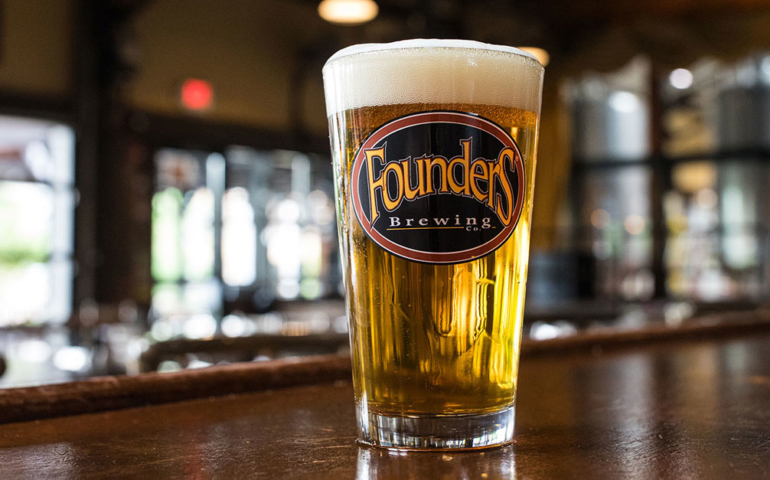 On Monday, Founders Brewing released a statement addressing an ongoing lawsuit with Tracy Evans, a former employee who sued the company for racial discrimination last year.

Founders says it hasn’t publicly responded because it was “advised to keep silent,” but that the case “has been so grossly misconstrued that [they] were compelled to speak out.”

The statement says Evans’ claims “rocked” the organization “to its core.” It then denies all of Evans’ claims, saying: “There are essentially four claims made by the former employee, all of which are false: 1. that no repercussions occurred when racially offensive language was used around the employee; 2. that the employee was passed over for promotion due to his race; 3. that the company electronically named its office printers racially offensive names; and, 4. that the employee was terminated in retaliation for his complaints.”

While it is difficult to prove Nos. 2, 3, and 4, here’s what we do know: Evans endured racial slurs at work when he was called the n-word twice by fellow Founders employees. Those employees kept their jobs. Founders says Evans was “satisfied” with how the company handled the situation.

As a brewery that states it has “no tolerance for such language” and “the use of any racially insensitive language would result in immediate termination,” it’s awfully curious that it would leave it up to the offended employee to decide whether employees who used that language should be fired or not.

The statement is signed “Mike & Dave, Co-Founders,” with the awkwardly placed phrase, “Brewed for Us.”

Brewed for whom, exactly? Founders is the 14th-largest brewing company in the country. Hiring a director of diversity is great, but you know what’s better? Firing employees who use the n-word. Set an example for your millions-strong fan base, and for your staff. The beer community — all of us — deserves better than this.

All About Beer, Other Publications Fold

All About Beer magazine, Beer Growler magazine, and Northwest Brewing News are all calling it quits, according to various reports.

All About Beer filed for Chapter 7 bankruptcy, Triangle Business Journal reported last month. The beer publisher is more than $4.5 million in debt to more than 5,000 creditors, including former staff and subscribers. Its assets total less than $50,000, Brewbound reports. Speculations the magazine was folding first occurred in October 2018, as VinePair reported.

This is all very, very sad news for beer lovers and the writers and editors who created a space in the media for beer from 30 years ago until today. I am — or was — a subscriber to nearly all of the aforementioned publications, and will genuinely miss them. And while it’s easy to blame the internet and millennials for rendering print publications obsolete, we’re not the only ones to blame.

Brewers play a part in this, too. Beer magazines stay afloat via advertising from the breweries and businesses they champion. When brewers are no longer willing to support the publications that support them, we all suffer.

‘Craft Is in the Eye of the Beholder,’ Says Heineken

A new report from the Society of Independent Brewers (Siba) in Britain indicates beer drinkers may be buying beers owned by multinational conglomerates without knowing it. A whopping 98 percent of respondents believe global breweries like Anheuser-Busch InBev or Molson Coors cannot make craft beer, the Guardian reports.  Additionally, 43 percent of respondents believe craft beer must be produced by a small brewer.

Big Beer begs to differ. “Whether it’s ‘craft’ is really in the eye of the beholder,” Jan-Willem Heeg, Heineken head of craft development, said. Heineken owns Lagunitas Brewing in the U.S., Maltsmiths in the U.K., and stakes in Beavertown and Brixton Brewery, also in the U.K. “What we do see is that the majority of people view craft beer as looking a certain way, with slightly more flavor, and generally new, or perceived to be new.”

The survey findings support a concern of many craft breweries and beer organizations — that consumers are “duped” by craft-style, “artisanal” branding from corporate conglomerates.

“This new research shows that if consumers were fully aware of what they were buying then they wouldn’t consider any beers from the global beer companies as craft,” Mike Benner, Siba’s chief executive, said.

“If 98 percent of people think craft is about a small, independent, quality product, then how can a global brewery get away with using that term?” Greg Pilley, managing director of Stroud Brewery in Gloucestershire, England, said.

I tend to agree that “craft” is more marketing than meaningful at this point. What’s important to me are things like beer quality, social and environmental responsibility, and that breweries treat and compensate their employees properly, along with forging genuine connections with their communities.

Craft is just a word. Independence is an ethos. Good beer is good beer.