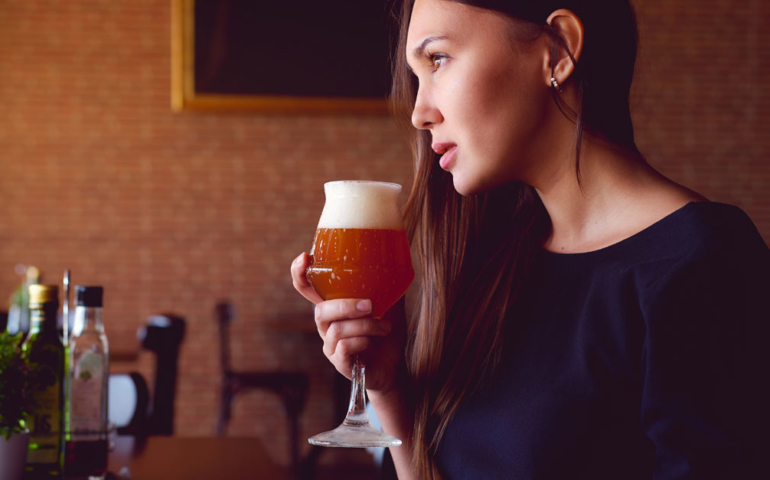 “In the age of #metoo … the pendulum has swung to far,” he writes. “One aggressive move and a man’s career can derail … My instincts to bed every woman I see are reducing from a king-sized mattress to a cot.” He goes on to berate the “feminazi,” comparing himself to Don Juan. “I’m not boasting here, but there are times when I’ve given the legendary womanizer a run for his money,” he writes.

It doesn’t stop there. “Women need a higher level of alcohol to overcome the social restrictions on their primal selves. After all, women have the need-to-breed gene, too. And excess consumption can ruin a diet,” Metzger writes. He goes on to mention Scotland’s “manly men raiding villages and ravaging maidens,” references “females who I would have banged,” and indicates that offering women Scotch will “bring them running.”

His column, by the way, was supposed to be about Scottish cask ale.

Although a subsequent statement from the newspaper claims the column is satirical, its misogynistic tone has many in the industry appalled.

VinePair first encountered the column via a tweet from Worst Beer Blog, a parody account that curates and comments on beer industry happenings.

I thought this was about cask ale? pic.twitter.com/YTI8LJ1dZp

Change.org is running a petition asking brewers and other advertisers to pull their support of the publication. It exceeded its initial goal of 1,500 digital signatures, and, at press time, has more than 2,000 of 2,500 signatures.

Teri Fahrendorf, founder and president emeritus of the Pink Boots Society, wrote on Facebook: “What does the #metoo movement and sexual harassment have to do with cask ale? Is cask ale more manly than other beers? And is the manliness of cask ales somehow threatened by women standing up for themselves and saying, ‘You need my permission to touch me?’” These are all good questions.

Great Lakes Brewing News posted a response on Facebook on Tuesday, claiming “the views of the fictional character” do not reflect the views of the newspaper or its writers. It also includes a rambling statement from Metzger. “We have been publishing the occasional piece that does anger people as some topics seem too toxic to discuss rationally,” he writes.

Funny stuff. I might argue that what’s actually irrational is misogyny — all bigotry is by definition illogical and unscientific.

The eruptive response to Metzger’s column suggests his views don’t reflect those of many in the industry. This is a relief. But its publication proves toxicity does still exist in beer, even on the front page of a friendly neighborhood brewspaper.

I came up as a beer writer reading this newspaper and others like it. It saddens me to imagine another young woman picking up a copy at her local beer shop or brewery and seeing this sludge on its front page. It’s alienating, and devastating.

Satire is an art. Bigotry is never funny.

On Tuesday, Molson Coors released its 2018 full-year and fourth-quarter results, which indicate sales are declining.

Molson Coors also addressed the Super Bowl #corntroversy, calling Bud Light’s ads a “gift.” It also addressed its partnership with Hexo, a Canadian cannabis company, saying that, while it is too early to comment on U.S. opportunities, its brands are monitoring that space.

This macro-brewing behemoth isn’t going anywhere. Its brands may be slipping, but Molson Coors produces eight of the top 25 best-selling beers in America. Competition is fierce, but corn-shaming is no match for the Silver Bullet.

Following reports last year that Lagunitas Brewing will brew Newcastle Brown Ale for the U.S. market, the Heineken-owned, Chicago-based brewery will “re-imagine” the Newcastle recipe to include American ingredients, Food and Wine reports.

Originally an English ale, Newcastle was purchased by Heineken in 2008 and officially moved operations from the U.K. to Holland in 2017. Its American-made iteration will be distributed in the U.S. starting next month.

“We are not known for malty beers,” Jeremy Marshall, Lagunitas brewmaster, said. “We are really honored and excited to re-imagine the new Newcastle Brown Ale using our malts, hops, and yeast for a silky smooth flavorful experience.”

The “new” Newcastle will include American Centennial and Chinook hops, as well as Lagunitas’s English house ale yeast.

I’m not shocked by this. Brewery ownerships change hands, and brands bounce around to be produced in places that suit each target market. Those pints of Guinness we’ll be hoisting next month were likely brewed in Canada, or possibly Baltimore. The Sapporo we chase our sushi and ramen with is brewed in Wisconsin. And hey, maybe someday, Ballast Point will be brewing our Corona.

A Newcastle better suited to American palates makes sense. The way I see it, we’re better off with a freshly brewed brown ale made with stateside hops than a malty brew subjected to the horrors of overseas distribution. Actually, I’m excited to try it.

On Wednesday, the Brewers Association (BA) launched a new grant program to fund diversity- and inclusion-focused events in the craft beer community. The funding aims to increase access and awareness of craft beer to new demographics, according to a press release.

“The Brewers Association continues to take proactive steps to advance our members and the brewing community’s path of diversity and inclusivity,” Julia Herz, BA craft beer program director, said. “By helping to support these varied types of events, we can foster growth and spur a cultural shift when it comes to the beverage of beer. We look forward to reviewing the proposals and awarding the inaugural class of grant recipients.”

It will be accepting grant applications through March 15, 2019.

Given this week’s Great Brewing News debacle, and what writer Kashana Cauley calls our “totally normal” 2019 Black History Month, inclusivity is paramount. White men making bad decisions is old news, yet remains a current event. I am looking forward to the future.