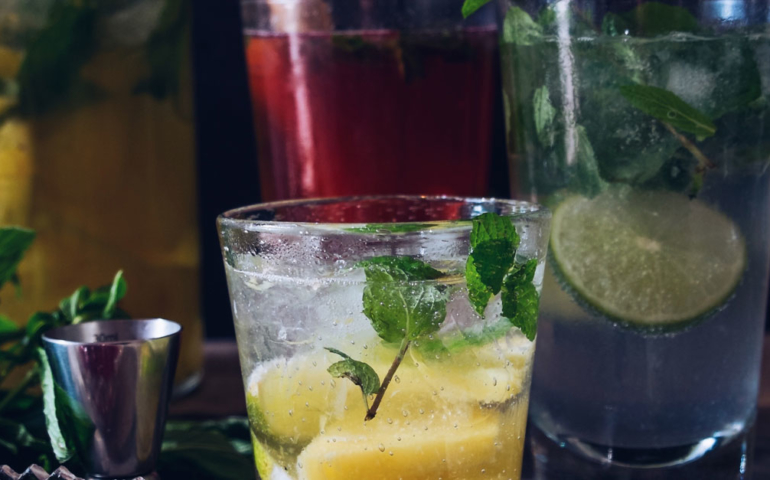 Home cooks know that sous-vide machines are great for cooking steaks, chops, filets, eggs, and more. Home bartenders are also discovering that a kitchen sous-vide wand can have a second and possibly more meaningful purpose: filling out your liquor cabinet with a slew of unusual or hard-to-find ingredients, from fruit syrups and herbal tinctures to seasonal infusions and aromatized liquors.

Meaning “under vacuum” in French, sous vide involves cooking food by submerging airless containers — such as professionally vacuum-sealed packages, plastic zipper bags with most of the air pushed out, and liquid-filled bottles — in a heated water bath.

Simple clip-on, sous-vide “circulator” wands and the larger, vessel-shaped sous-vide machines both control heating of the water bath to the exact degree, allowing you to cook an item at a precise temperature. For the fruits, herbs, and spices required in many cocktail ingredients, that means extracting the maximum amount of flavor.

In Canada, cocktail enthusiast Matej Novak recently used a sous-vide bath to make his own custom vermouth, posting a video of his experiment on his YouTube channel, Cocktails and Happiness.

“Unfortunately, here in Ontario we have the LCBO [Liquor Control Board of Ontario], so we have a fairly limited selection of vermouths we can get,” Novak says. “I chose my ingredients based on things that I thought would work together, things that I liked, and things that I knew I’d be likely to find.”

For Novak’s recent recipe, the ingredients included star anise, coriander, vanilla, lavender, and a bottle of Chilean white wine, as well as healthy doses of brandy and sherry to raise the alcohol up to vermouth’s normal levels. Despite the traditional aromatics, Novak says that his final version was not like any vermouth he’s ever had before.

Beyond being able to make a one-of-a-kind mixer or a decent substitute for a product that’s not available in your area, the sous-vide process offers another big bonus: speed.

“It’s kind of amazing,” Novak says. “In the morning I went out and bought my ingredients, and by the evening I had my own vermouth.”

Novak also produced a sous-vide lime cordial, useful for Gimlets, sweet Rickeys, and a long list of mocktails. Instead of the overnight or multiple-day timespan of his previous batches, Novak’s sous-vide version finished very quickly.

“It turned out to be this really bright, flavorful cordial after only a couple of hours.”

The speed of sous-vide cooking can help capture ingredients like foraged plants, herbs, and blossoms, which are only available for a short time.

“What I like to do is take whatever berries or fruits or herbs are in season, and whatever sugar source you want to use, and just throw that into a bottle at a high temp for an hour or two, and then you have a beautiful syrup to make drinks with,” Zach Johnston, a food and drinks writer based in Berlin, says. “You have them on the shelf, and you can go back to them whenever you need it.”

One of Johnston’s favorites is woodruff syrup, the bright-green sweetener traditionally dropped as a shot into a Berliner Weisse, the celebrated sour beer from his adopted city. For that, Johnston gathers fresh woodruff from local forests.

“I make my own woodruff syrup and it’s not neon green, but more of a light green, and the flavor just pops,” Johnston says. “You only need a dash of it.”

In addition to his Berliner Weisse sweetener, Johnston has also sous-vided his own vermouth and grenadine. He recommends using relatively high temperatures, around 195 to 200 degrees Fahrenheit (90 to 93 Celsius) for most sous-vide extractions, and a fairly short time span.

Above all, Johnston advises new experimenters to start with relatively small amounts of aromatics.

“You can make a mistake by putting too many herbs and spices and things in, and it just blows it out. You have to be subtle,” he says.

One of his early attempts at a sous-vide vermouth, he admits, included far too much spice.

“One mistake was putting a big piece of cinnamon in a vermouth,” Johnston says. “The whole thing just tasted like a bitter bark of cinnamon.”

While the use of sous vide was largely confined to professional kitchens a decade ago, the past few years have seen more home cooks embrace the method, thanks to a number of newly affordable consumer models. Sales of sous-vide machines are expected to reach $1.28 billion in the U.S. by 2023, up from $180 million in 2017, meaning more and more home cocktail enthusiasts will be able to use the method for mixers.

For Johnston, no other method of cooking works quite as well.

“It locks in flavors like no other and gives you a temperature control you just can’t get on a stovetop,” he says.

Novak considers this recipe a work in progress, and it’s infinitely adaptable. Feel free to add your own ingredients or play with the ratios to suit your whim.