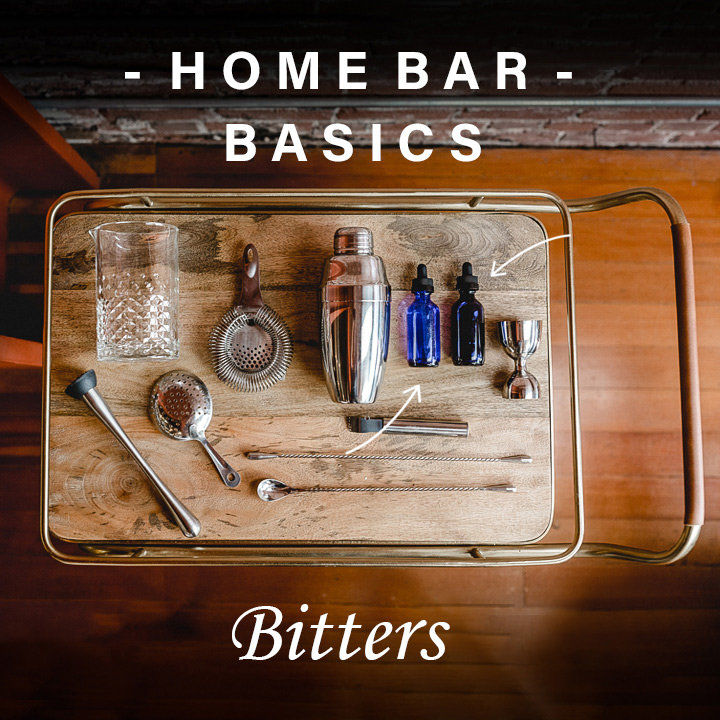 You’ve finally carved away precious square footage to make room for that most sacred of household additions: the home bar. But turning out top-notch drinks while in your slippers takes more than good intentions. There are bottles to buy, tools to agonize over and techniques to master. Follow us as we help you navigate your home bar basics.

Technically, it’s not a cocktail unless it has bitters. According to “The Farmers Cabinet,” an 1803 periodical credited with the first written use of the word, to be called a cocktail, a drink must be comprised of four ingredients: spirits, sugar, water and bitter

For much of the last century, as the American palate drifted toward the sweeter things in life, bitters were all but ignored by bartenders. But a decade-long boom in production is proving that few things can add depth and complexity to cocktail as easily and effortlessly as a dash or two of bitters.

“Think of them as seasoning,” says Jamie Boudreau, the founder of legendary Seattle cocktail bar Canon. “If your drink seems flat, bitters can be the answer.”

Bitters—alcohol infused with herbs, spices and botanicals—have been around since the snake oil days of the 19th century, when they were believed to cure everything from malaria to heartburn. During the Civil War, officers in the Union Army called them the soldier’s safeguard, able to protect against the “fatal maladies of the Southern swamps and the poisonous tendency of the impure rivers and bayous.”

Americans eventually wised up to their fictitious medical benefits, and before long, bitters went bye-bye, only to be rediscovered by forward-thinking bartenders in the 1990s. Today, they’re as essential to the home bar as gin and whiskey. In recent years, hundreds of brands have flooded the market, making it difficult to decide what’s worth your money and what’s going to sit around taking up valuable shelf space.

Before you journey down the bitters bunny hole, it’s best to first do some soul-searching. Are you a brown-spirits imbiber? A mixer of Martinis? Do you fly the happy-hour Tiki flag?“The idea is to experiment with products that fit your taste profile,” says Meredith Lantz, the co-owner of Bitters + Bottles, which stocks more than 200 different bitters in its San Francisco shop. “It’s like building a pantry for your kitchen. If you’re someone who makes Thai food a lot, then your pantry is going to look a lot different than someone’s who cooks mostly Italian.”

For the equal-opportunity boozer, however, there are a few basic categories of bitters that deserve your attention. The first, and most popular, are aromatic bitters. These include the founding fathers of cocktail tinctures, Angostura and Peychaud’s. Both are 19th-century workhorse concoctions that share a gentian root base and alternate between notes of licorice, cinnamon and warm spices. Without them, there’d be no Manhattan, Old Fashioned, Sazerac, Vieux Carré or any number of classic cocktails.

From there, people work their way to fruit bitters, the most prominent of which is orange but also include cherry, peach, cucumber, grapefruit and a host of others. Fruit bitters tend to pair well with lighter spirits like gin and tequila, says Lanza, and can add a stab of texture to citrusy drinks like Gimlets and Margaritas.

On the opposite side of the flavor chart, you’ll find rich bitters, which run the gamut from chocolate and coffee to pecan and walnut. These are big, bold statement-making bitters that play best with barrel-aged spirits like rum and bourbon.

Lastly, there’s the esoteric but fast-growing savory bitters. “This category makes for very memorable cocktails,” says Lanza. “They balance out the sweetness in a drink nicely and are usually flavors you don’t find in the spirit itself, such as rosemary, chili pepper and olive.”

A good experiment, according to Lanza, is to take a simple drink like a Gin & Tonic and mix multiple versions of it using different bitters. “A few dashes of cardamom bitters will give you an extra spicy cocktail,” she says. “While a cucumber bitter will introduce a cooling element, and a lavender bitter will lighten things up.”

But as with any too-big box of crayons, the question remains: Which ones do you really need?

“Start with the staples—Angostura, Peychaud’s, orange bitters,” says Boudreau. “Then build from there as you find recipes you like. You want to try to avoid buying bitters with only one or two uses. Space is always at a premium, and rarely used bottles usually mean clutter and dust.”

So before you shell out 20 bucks on a dropper bottle of figgy pudding or frankincense bitters, taste as many varieties, from as many categories, as you can. Some specialty shops, like Bitters + Bottles, keep testers on hand, allowing you to sample the goods before you purchase.

If that’s not an option, ask your local bartender for a taste. Chances are they’ll have a wide variety of bitters to choose from, as well as tips on how best to use them. And don’t get caught up on brand names, says Lanza. “No one goes looking for a specific brand of rosemary. The key is to lock in on the flavor you like, then add that to your bar. Once you start building a bitters library, you’ll see that it’s hard to stop.”