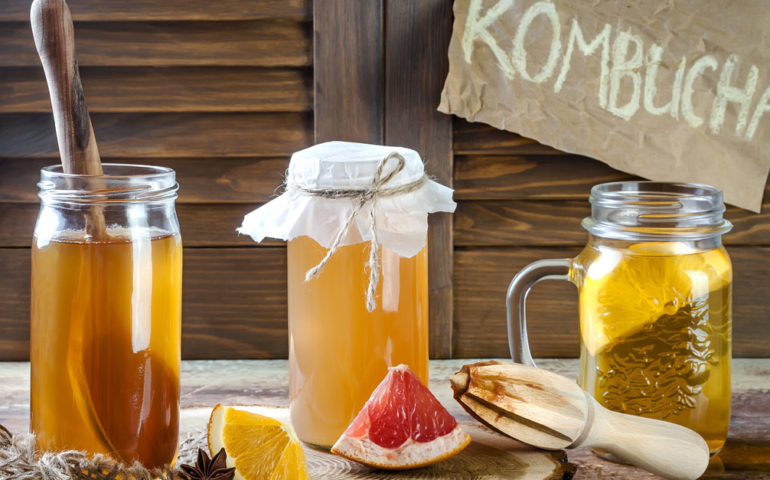 Kombucha is alive. Not only is it explosively trendy — kombucha is among the top-selling fermented drinks in the country and is expected to grow another 25 percent next year — it is also a living thing.

But don’t let its microflora scare you. Kombucha, a fermented carbonated beverage typically made with black or green tea (or both), plus sugar, yeast, bacteria, and optional flavorings, is no longer the fearful homebrewed concoction it once was. Unlike those rip-your-teeth-off, vinegary tinctures that had us Googling “kombucha poisoning” in the early 2000s, today’s kombucha is an actually pleasurable beverage with a variety of flavors, fruit and spice combinations, and intensity levels. It has emerged as a popular alternative to beer or soda, or a mixer for cocktails.

In the spirit of January cleanses and health-and-wellness trends that tend to proliferate our social feeds around this time of year, VinePair tasted a lot of kombuchas to find the best of the bunch. The majority are available at major retailers, including Walmart, Costo, Target, Whole Foods, Trader Joe’s, and even Amazon.

To keep things morning-friendly, we limited our ranking to traditional kombuchas that are legally non-alcoholic. Most have trace amounts of alcohol, around 0.5 percent ABV, but are not considered legally alcoholic.

Here are seven of our favorite kombuchas, from pink to green and everything in between, ranked.

At the end of our list only because of its limited availability (at farmers markets and stores in New York State), this is one of the absolute best kombuchas we tasted all year. Fairy Tonic packs a lot of strawberries and ginger into a 375-milliliter swing-top bottle that looks as good as it tastes. We feel truly hashtag-blessed to have Blessed Brewery in our backyard, and recommend it highly to anyone in the New York area.

This bottle combines a sleek, simple exterior (“like a Swiss airline lounge,” one panelist said) with a pretty-in-pink interior. Pilot’s Pomegranate Rose (rose, not rosé) was a crowd pleaser in every way. Its distribution is limited, but this small-batch ‘buch made in Brooklyn’s Greenpoint neighborhood is a delicate and gentle take on tart tea. A lovely rosewater aroma soothes the senses, while frizzante-like bubbles perk up the palate with each sip. “It’s like a pink Prosecco, without the sweetness,” one panelist said.

Brew Dr.’s Lemon Ginger Cayenne is gentle all around. It pours a pale, clear color, which one taster compared to “the pear cider my grandmother made.” Off the bat, multiple tasters thought this kombucha would make a great mixer. “I want to add vodka or rum to this,” one panelist said, then specified, “Captain Morgan.” Light and spritzy “like a La Croix,” with a lemony tartness, “it tastes like a very fancy lemonade.” The cayenne is detectable but not too hot.

This widely-available kombucha is brewed with a juice blend including strawberry and elderberry. The bubbliest of the bunch, its fine carbonation explodes on the palate, lending an invigorating twist to a classic flavor combination. “It’s spritzing out of my glass,” one taster noted. This brew also earned top marks for its fresh strawberry aroma, not-too-sweet flavor, and zesty finish.

This cider-like kombucha made with cold-pressed apple juice is a great introduction for kombucha newbies. Pink Lady Apple has an elegant balance of sweet and tart, satisfyingly natural apple flavor, and just the right amount of carbonation to keep it refreshing and chuggable.

GT’s makes a wide variety of kombuchas in a range of flavors. We thoroughly enjoyed them all. GT’s Gingerade is intensely refreshing, with ginger spice and tartness hitting the nose and palate right away. This variant is “the epitome of kombucha,” one taster said. “It’s just the best one,” said another. Fans appreciated this variant’s “raw, rank, in-your-face realness” and pungent acidity, while others well-versed in sour beverages found it “subtle.” The best part? It’s available by the 12-pack at Costco.