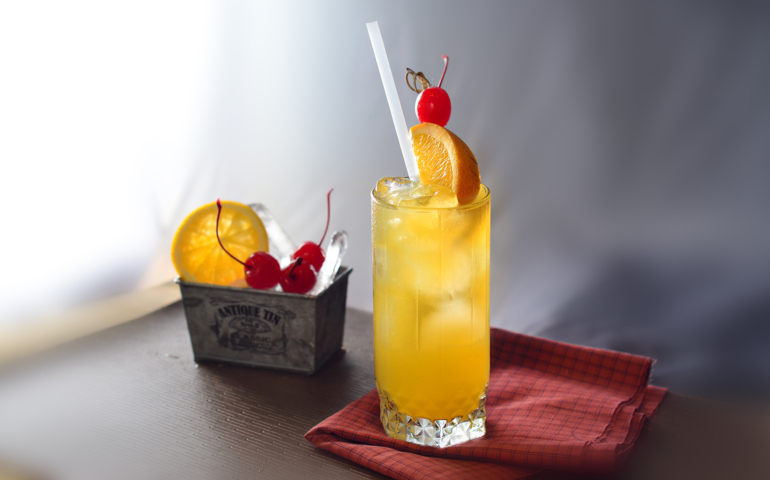 Share this on WhatsApp
Harvey Wallbanger is a fun and simple vodka cocktail that was created in 1952 and became a smash among cocktail lovers in the early 1970s.
Just like most cocktails, the story behind the cocktail is not particularly clear, with many culinary historians holding on to different accounts of how the drink came about.

While many claim the drink was invented by three-time world champion mixologist Donato “Duke” Antone, some culinary historians argue otherwise.

Legend says that Donato named the drink after a famous surfer in the 50s who walked into his bar on Sunset Boulevard, California, and ordered a Screwdriver cocktail mixed with a measure of Galliano. The surfer got so drunk over the gold-coloured cocktail that he started banging his head off the wall, apparently in anger over his surfing performance that day. The surfer’s name was Tom Harvey, hence the name of the drink.

The drink did not, however, become popular until the 1970s when women began to frequent fern bars and the demand for sweet-tasting cocktails soared.

Also, this was followed by a wonderful promotional move by McKesson Imports Company and its marketing team. McKesson was responsible for importing Galliano, the Italian liqueur that gave the cocktail its golden-yellow colour. The company is reputed to have hired a man named Bill Young came up with a goofy cartoon character to represent Harvey as its official national mascot of sorts, with the promotional phrase: “My name is Harvey, and I can be made.”

Whether the legend of Tom Harvey is true, or it was just a marketing stunt by the marketing team of Galliano (which also became popular at the time), it takes nothing away from the fact that many tiki glasses were filled with golden-yellow cocktails all over American beaches in the 70s.

November 8th has been marked as the Harvey Wallbanger Day when the classic drink is celebrated across the US, and virtually in many bars across the world.

The Harvey Wallbanger is just a simple mix of orange juice, vodka, and Galliano. It has a vanilla taste that appeals to the sweet palate, and it is a favourite for most bartender because of its simple recipe.

How to make Harvey Wallbanger

The cocktail differs in alcohol by volume (ABV) depending on the drinker’s choice. You might prefer more vodka and less orange juice, or more orange juice and less vodka. However, if you follow the traditional recipe, the alcohol content should come to around 12% ABV (24 proof). Little wonder Tom Harvey started banging his head after taking several glasses.